On Wednesday, the network morning shows gave a combined 53 seconds of air time to Democrats losing a bellwether congressional election in Florida and just 37 seconds to bad poll numbers for President Obama. Meanwhile, Obama shopping at the Gap and pushing regulations to force businesses to pay employees overtime wages got 3 minutes and 36 seconds of coverage. [Listen to the audio or watch the video after the jump]

On NBC's Today, co-host Savannah Guthrie gushed: "You're at the Gap, you're trying to decide between the cranberry or maybe the indigo t-shirt, you look over and who is sizing up the same items but the leader of the free world....It happened to a store full of shoppers here in New York on Tuesday, President Obama popped in." 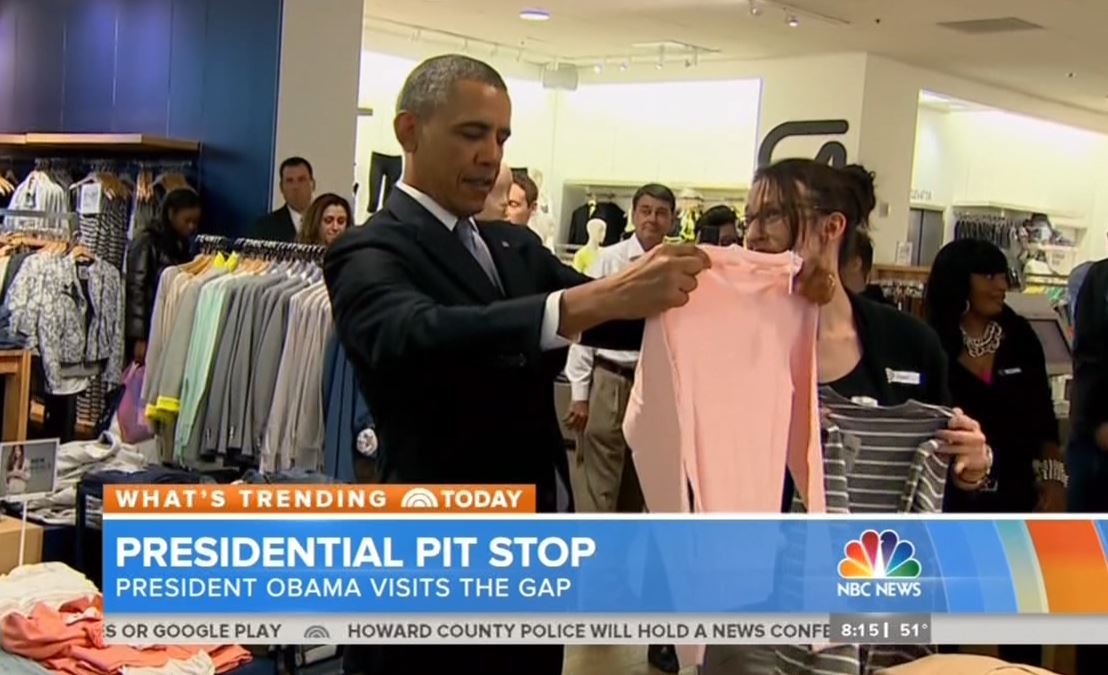 Fellow co-host Matt Lauer chimed in: "That's right, the President was there to praise the Gap for raising its minimum wage but he also found a little time to do some shopping for his family and – I love this – have a little fun with store clerks." A clip played of Obama telling the store cashier: "Say that louder." The cashier turned to the cameras and announced that the President was "better looking in person."

CBS This Morning touted that same clip at the top of the show. Minutes later, co-host Charlie Rose declared:

The White House is rolling out a new project to help average workers make more money. President Obama went shopping yesterday in a New York City Gap store. He praised the company for raising its hourly wages. Now the President's set to change the rule for paying overtime. 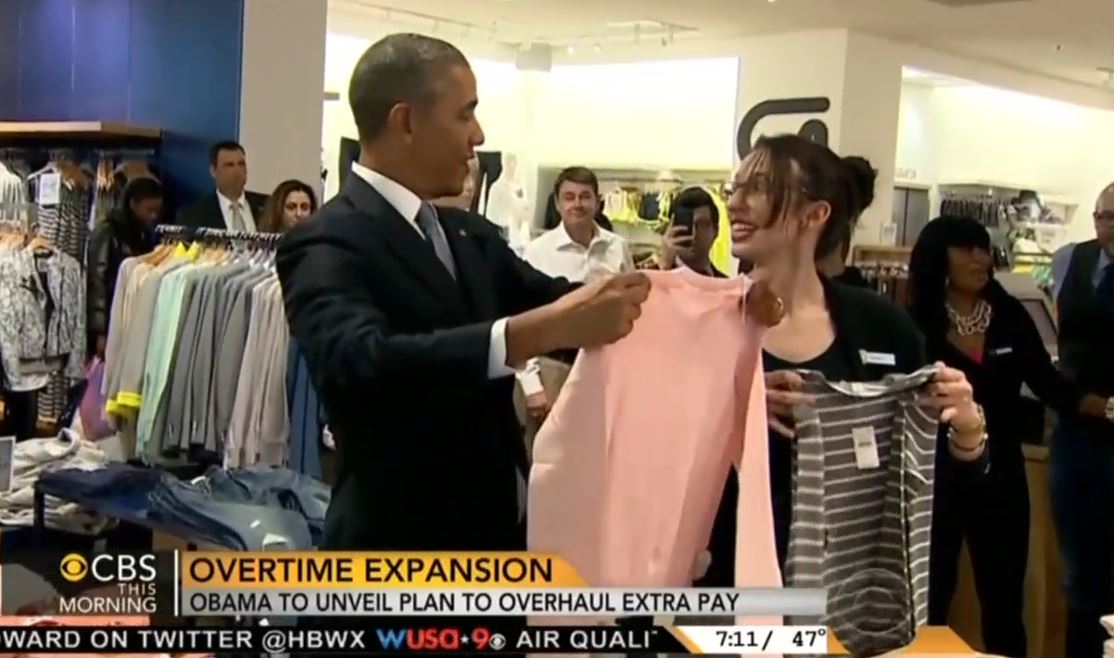 Turning to White House correspondent Major Garrett, Rose touted how the new policy would "affect millions of households." After explaining the details of the proposal, Garrett concluded: "All this, Charlie and Norah, is designed to combat what the White House calls income inequality across the country. And it's worth pointing out it would give Democrats in the midterm elections another economic bread basket issue to run on."

We're going to begin here with a major change in the American workplace that could result in millions taking home more overtime pay. President Obama is expected to issue an executive order today that would change federal labor law to require businesses to pay overtime to more salaried workers.

Here is the morning show coverage of the Florida special election results:

NATALIE MORALES: Meanwhile, a congressional district in Florida that has been in Republican control for 42 years will remain in the GOP column.

Republican lobbyist David Jolly beat Democrat Alex Sink in a special election Tuesday night. Jolly replaces the late Republican C.W. Bill Young, who died in October. The battle in the Tampa area district was seen by many as a prequel to November's congressional elections.

JOSH ELLIOTT: And in a possible preview of November's midterm elections, Republicans scored an upset win, Tuesday, in a special election for Congress in Florida.

NORAH O'DONNELL: The Washington Post says Republican David Jolly won a special election in Florida. Jolly's victory in the race for the Tampa-area House seat is seen as a test case for the fall midterms. He campaigned on a pledge to repeal the President's health care law.

And with more than $12 million spent on both sides, it was one of the most expensive House races ever.

It should be noted that Tuesday's CBS Evening News provided a nearly 2-minute full report on the Florida race ahead of the actual election results. Interesting that the coverage dropped off after the Democrat lost.

Here is the even briefer coverage of Obama's sagging poll numbers, CBS ignored the news completely:

NATALIE MORALES: And a new NBC News/Wall Street Journal poll finds President Obama's job approval ratings at an all-time low, just 41% say they approve. That is down, though, from 43% in January.

And with congressional elections just eight months away, Republicans have the edge among those polled. 44% say they would rather have a Republican-controlled Congress. Democrats got 43%.

And when it comes to Russia, a record 72% of Americans now see Russia as an adversary rather than an ally.

JOSH ELLIOTT: Meantime, the President may have a lot more to worry about. A new poll finds his approval rating has dropped to a record low.