In the wake of her filibuster in the Texas state senate on Tuesday, NBC, ABC, and CBS all expressed their outrage at Texas Governor Rick Perry daring to criticize their anointed abortion "folk hero" Wendy Davis. On Friday, Today co-host Matt Lauer announced: "The battle over abortion gets very personal as Governor Rick Perry takes on a female senator whose filibuster helped block a controversial bill." [Listen to the audio or watch the video after the jump]

On Thursday's ABC World News, anchor Diane Sawyer attached the "folk hero" label to Davis as she fretted over "Perry creating a kind of high noon between the two of them." In the report that followed, correspondent David Kerley hyped Perry's mild critique of Davis as setting up "a true Texas showdown" and exclaimed: "Today, Perry made it personal."

Bojorquez touted Davis ranting against Perry's comments: "[She] fired back on Twitter, saying the Governor 'shamefully attacked' her and her family."

During the Today show report, correspondent Tamron Hall claimed that Texas Republicans had been worked "into a frenzy" following the pro-life legislation in question missing the midnight deadline on Tuesday (not because of Davis's failed filibuster effort, but because of a mob of rowdy abortion activists disrupting the legislative session).

In his World News report, Kerley characterized the Texas GOP in a similar manner, remarking that the filibuster by Davis "angered Rick Perry."

On Wednesday, all three network morning shows celebrated the "passionate" political stunt by Davis while largely ignoring pro-life voices on the issue.

Here is a portion of the June 28 coverage on Today: 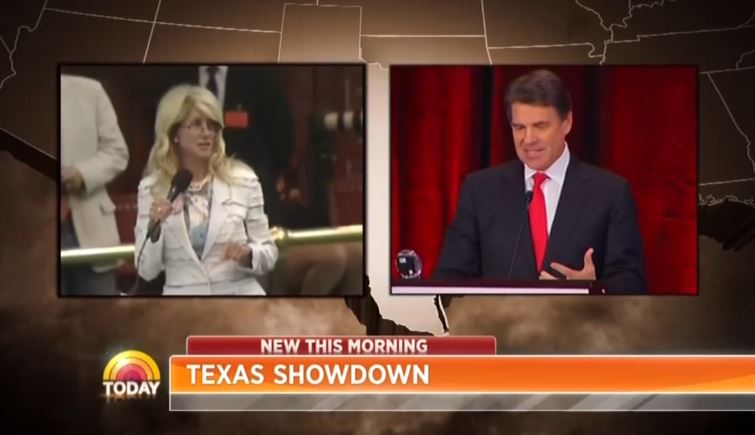 MATT LAUER: Texas showdown. The battle over abortion gets very personal as Governor Rick Perry takes on a female senator whose filibuster helped block a controversial bill. This morning, what he said and how she's responding.

SAVANNAH GUTHRIE: Meantime, a war of words is developing between Texas Governor Rick Perry and the state senator whose filibuster helped block a controversial abortion bill. And this has gotten very personal. NBC's Tamron Hall has the story. Tamron, good morning to you.

TAMRON HALL: Hey there, Savannah. Wendy Davis talked for eleven hours on Tuesday, bringing attention to a controversial abortion bill. And when the vote was not taken in time, the bill failed, sending some Republicans into a frenzy. Well, now Governor Rick Perry is bringing attention to her past and her path to politics.

A showdown in Texas, after Democratic state senator Wendy Davis's eleven-hour filibuster on Tuesday helped prevent a vote that would have effectively closed most abortion clinics in Texas. Republican Governor Rick Perry commented about Davis yesterday at the National Right to Life convention, making politics personal.

Here is a portion of the June 28 This Morning coverage: 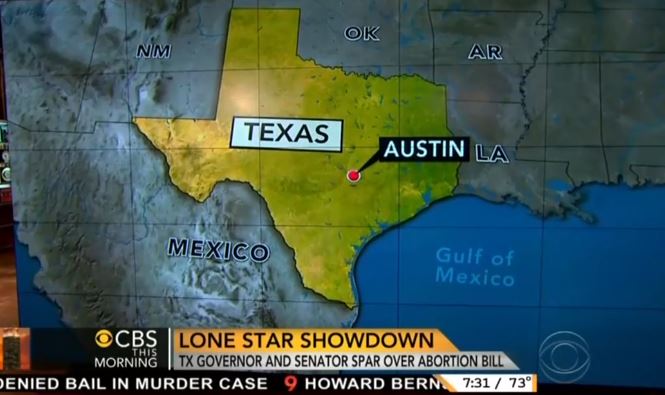 GOV. RICK PERRY, (R), TEXAS (from National Right To Life convention): It's just unfortunate that she hasn't learned from her own example.

WENDY DAVIS, (D), TEXAS STATE SENATOR: That demeans the – the high office that he holds – to make a personal statement like that.

O'DONNELL (voice-over): We'll look at the battle that's gone from the floor of the state capitol to national headlines.

NORAH O'DONNELL: The heated battle over abortion rights in Texas is getting personal. Governor Rick Perry is criticizing the Democratic lawmaker who led that eleven-hour filibuster on Tuesday night. Governor Perry said State Senator Wendy Davis should consider her own life and what would have happened to her if her mother had had an abortion. Manuel Bojorquez is in Austin, Texas. Manuel, good morning.

MANUEL BOJORQUEZ: Good morning, Norah and Anthony. The governor and the Republican majority here are upset Davis and her supporters derailed a bill that would have made it tougher for abortion clinics to operate in the state. The governor set off a showdown during a speech about protecting the unborn.

Here is a portion of the June 27 World News coverage: 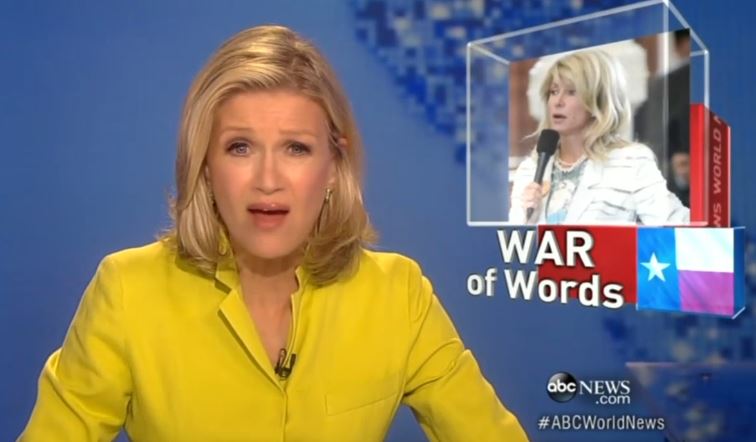 DIANE SAWYER: Now we turn to a hot showdown in Texas between a firebrand woman in tennis shoes and the Texas governor. We told you about that Texas mom, Wendy Davis, who became a folk hero to her supporters after talking for 11 hours to block conservatives from changing current law in Texas and closing nearly every abortion clinic there. Well, today, enter Texas Governor Rick Perry creating a kind of high noon between the two of them. ABC's David Kerley on round two.

DAVID KERLEY: Tonight, it's a true Texas showdown. The state senator in pink tennis shoes versus the governor.

RICK PERRY: But what we witnessed Tuesday was nothing more than the hijacking of the democratic process.

KERLEY: -is what angered Rick Perry: Wendy Davis's 11-hour filibuster– no food or water– to stop a bill that would make abortion nearly impossible in Texas. It worked and Davis' shoes, which she wore to endure standing all that time, are now a trending search term. Today, Perry made it personal.