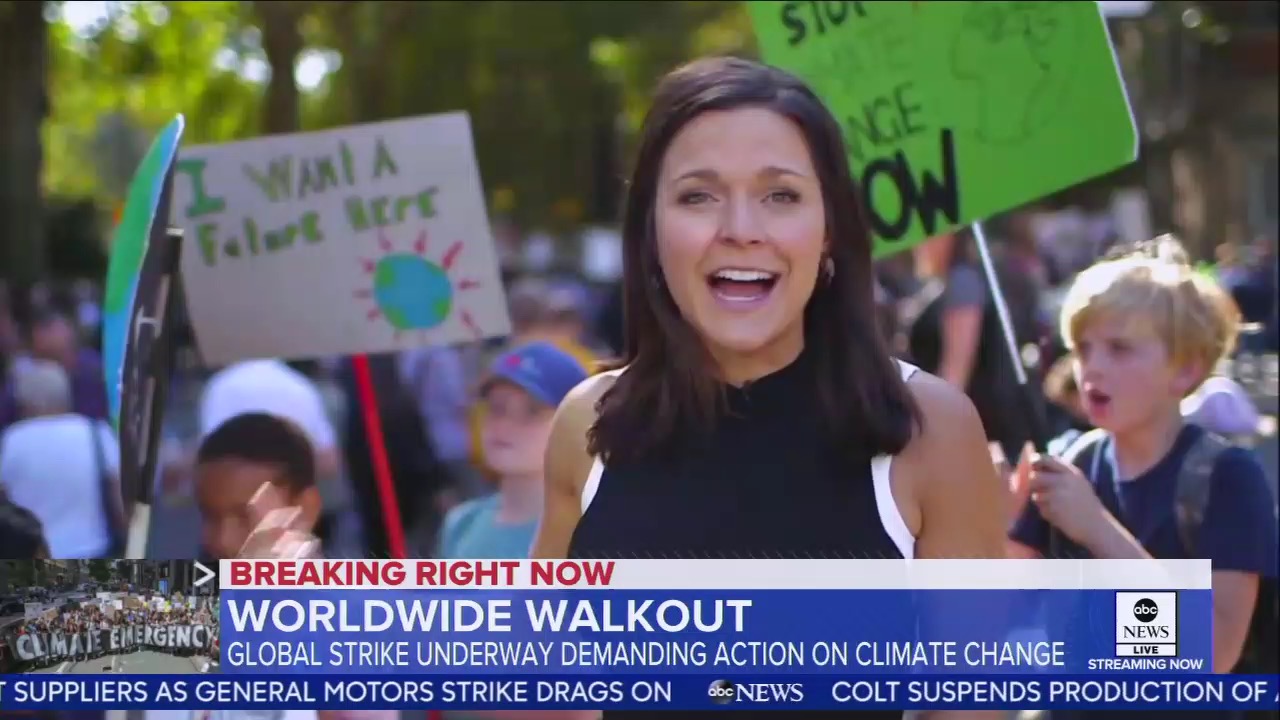 The three major broadcast networks spent time promoting radical environmental activism on Friday’s morning broadcasts. Teens and children conducted a global “strike” this morning against climate change ahead of a United Nations summit on the subject. ABC, NBC and CBS couldn’t get enough of the youths' liberal activism, gushing about the kids as young as 9 years old walking out of school to “lead the way” in the political movement.

NBC’s Craig Melvin: "Millions of people are expected to join demonstrations demanding action on climate change in cities all over the world."

ABC’s Michael Strahan: "Students and workers all around the world are flooding the streets demanding action on climate change."

CBS and ABC were the most effusive in their reports, gushing about the age of the protesters and the “huge” number of people who showed up:

CBS’S IMTIAZ TYAB: A major protest here in London, and indeed right across the planet, led largely by school-age children who say now is the time to strike back against climate change. Over in Australia, we have already seen hundreds of thousands take to the streets...With the huge number of people expected to turn up in New York, it's all part of the Fridays for future movement started by 16-year-old Swedish schoolgirl Greta Thunberg.

ABC’S MAGGIE RULLI: We're here with thousands of protesters underneath Parliament. What is so striking besides just the sheer size of protesters here are the age of people who are demonstrating. Almost all of them are students, this group behind me just 9 years old…[I]t’s looking to be the largest climate protest in our planet’s history.

Each network spent time promoting the “demands” of the activists as well, with no criticism or counter opinion:

CBS’S TYAB: "Here in London, we've been speaking to protesters who say climate change is the defining issue of their time. And that if more isn't done, we're going to see a lot more protests like this."

ABC’S RULLI: "We spoke to a group of 17-year-olds who say they're here today to fight for their future...One of their many demands is to say they want to phase out fossil fuels by 2030 and replace them with renewable energy."

NBC’s CRAIG MELVIN: "They’re all calling for the same thing: reducing the use of fossil fuels to try and help climate change."

ABC spent time praising Thunberg, as well. Maggie Rulli referenced the teen walking out of school in her initial climate “solo strike” which inspired this one: “Now look at what her movement has become!” she gushed.

The networks weren’t the only ones in the media fawning. Just this morning the New York Times whined that New York City public school teachers were barred from attending the political protest, which one teacher complained was not political but a “scientific fact” and Constitutionally given right.