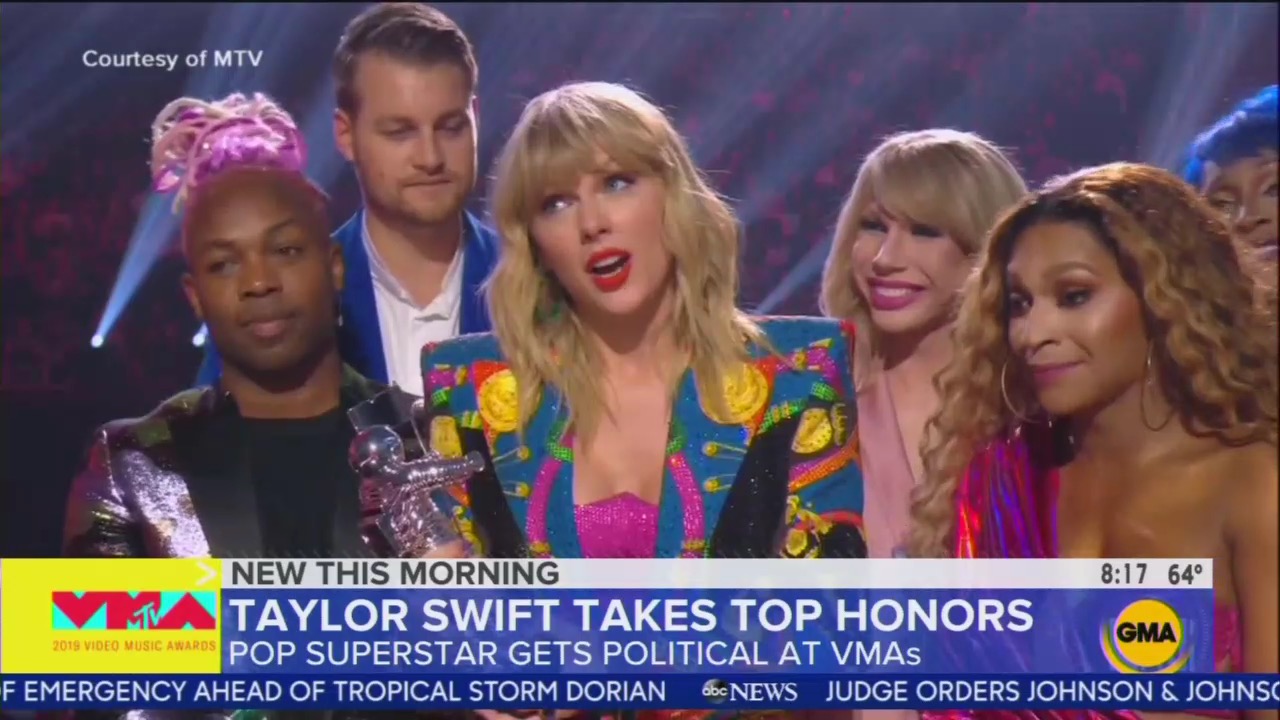 On Good Morning America, correspondent T.J. Holmes was enthusiastic at how quickly the awards show turned political: “The VMAs started at 8:00 eastern live last night. By 8:03, Taylor Swift had made a political statement and she made it by just flashing two words across the screen [Equality Act].”

ABC then played a video clip of Swift accepting the award on stage, surrounded by drag queens, urging viewers to sign a petition that she claimed warranted a response from the White House. On screen it read, “Taylor Swift’s Transformation: Pop Superstar’s Powerful Speech.”

Swift, who kept her politics private previously, finally urged her fans to vote Democrat in Tennessee's 2018 midterms. Her activism didn’t work because Republican Marsha Blackburn won her Senate bid. Still ABC touted Swift’s “transformation” as something that would change the course of history:

“This is all part of the Taylor transformation going from being famously apolitical to active but that all changed in 2018 when she waded into Tennessee politics” said Holmes. Of course he did not specify which party Swift had endorsed. He continued hyping the “Taylor effect:”

With that encouragement to her fans to register, Vote.org saw more than 60,000 registrations….[T]hat equality act extends LGBT discrimination protections on a federal level. Passed the House in May, not expected to pass this current Senate or even being brought up but still the Taylor effect we've seen before, she makes a statement in front of millions like that, we shall see.

However it was anchor George Stephanopoulos who really went over-the-top with his admiration: “Yeah and she’s doing it the way she does her music, she doing it with intent and intelligence,” he gushed.

CBS This Morning did not spend as much time covering the topic; still the enthusiasm was palpable. Host Gayle King teased the segment as the singer taking on President Trump: “Ahead, Taylor Swift's message to the White House after winning the big prize at the MTV Video Music Awards.”

After the break, CBS correspondent Nikki Battiste played the clip of Swift’s speech and call to the White House, joking, “I feel like we might see RBG [Justice Ginsburg] in one of her videos!”

Co-host Tony Dokoupil eagerly asked, “No response from the White House yet?” to which Battiste noted, “No response yet.” Fellow co-host Adriana Diaz gushed, “She is waiting!”