Actress Raves, 'Environmental Racism' Will Cause World to End by 2030; Rips Pence for Causing Smollett Attack 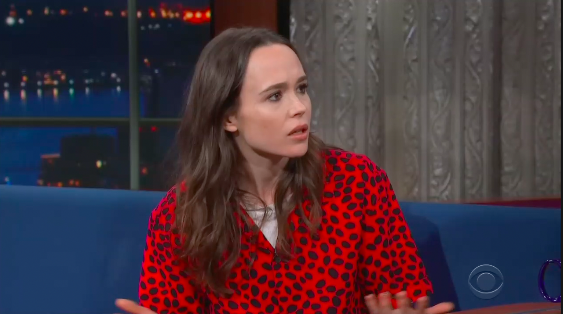 Openly gay actress and liberal activist Ellen Page appeared on The Late Show Thursday and went on an bizarre rant against everything from media coverage of global warming to the alleged hate crime against actor Jussie Smollett. She predicted the world was going to end in the next eleven years, yet no one was talking about it, and emotionally ripped into the Vice President for causing the alleged anti-gay attack against Smollett.

Host Stephen Colbert commiserated with Page over the effects of global warming, wondering how they could “get the public and the media to pay more attention to what’s happening.” He added, “There’s such a long time span,” that people didn’t feel it was an immediate threat. The actress disagreed, echoing Alexandria Ocasio-Cortez that the world was going to end very soon...as in the next eleven years.

“Is it that long?” Page said skeptically. Colbert argued that “until the water started swamping Manhattan, or just washes away Mar-a-Lago,” the public and media wouldn’t take it seriously. “You don’t want to think such terrible things are going to happen!” he gushed.

The actress blamed “environmental racism” saying that “people of color” do nothing to cause global warming but are disproportionately affected by it. “This is happening and it’s happening to the most marginalized people and we need to be talking about it!” she urged. If that wasn’t loony enough, Page then predicted the date the world was going to end:

Alluding to recent sci-fi movies, Page went on to hope that actress Amy Adams would “save us” and “the aliens would finally come and have compassion on us.” She scolded the media for not taking it as seriously as she did, weirdly shifting suddenly to hate crimes. Sounding like Chuck Todd, she demanded there not be any “debate” about either of these things:

“The urgency would be so severe. But instead, we have a media that’s barely talking about it. We have a media that says it's a debate that whether or not what happened to Jussie Smollett is a hate crime. Its absurd. Its not a f***ing debate,” she ranted, as Colbert agreed. Meanwhile, the host sat silently and let his Canadian guest emotionally tear into Mike Pence for that alleged attack, warning people to "connect the dots:"

It feels impossible to not to feel this way now with the President and Vice President Mike Pence who wishes I couldn't be married. Let's just be clear. The Vice President of America wishes I didn't have the love with my wife. He wanted to ban that in Indiana. He believes in conversion therapy. [audience boos] He has hurt LGBTQ people so badly as the governor of Indiana, and I think the thing we need to know and I hope my show Gaycation did this in terms of connecting the dots....to Jussie [Smollet] I don't know him personally, I send all my love.Connect the dots. This is what happens. If you are in a position of power and you hate people and you want to cause suffering to them, you go through the trouble, you spend your career trying to cause suffering, what do you think is gonna happen? Kids are going to be abused, and they're going to kill themselves, and people are going to be beaten on the street. I have traveled the world, and I have met the most marginalized people you could meet. I am lucky to have this time and the privilege to say this. This needs to f***ing stop.