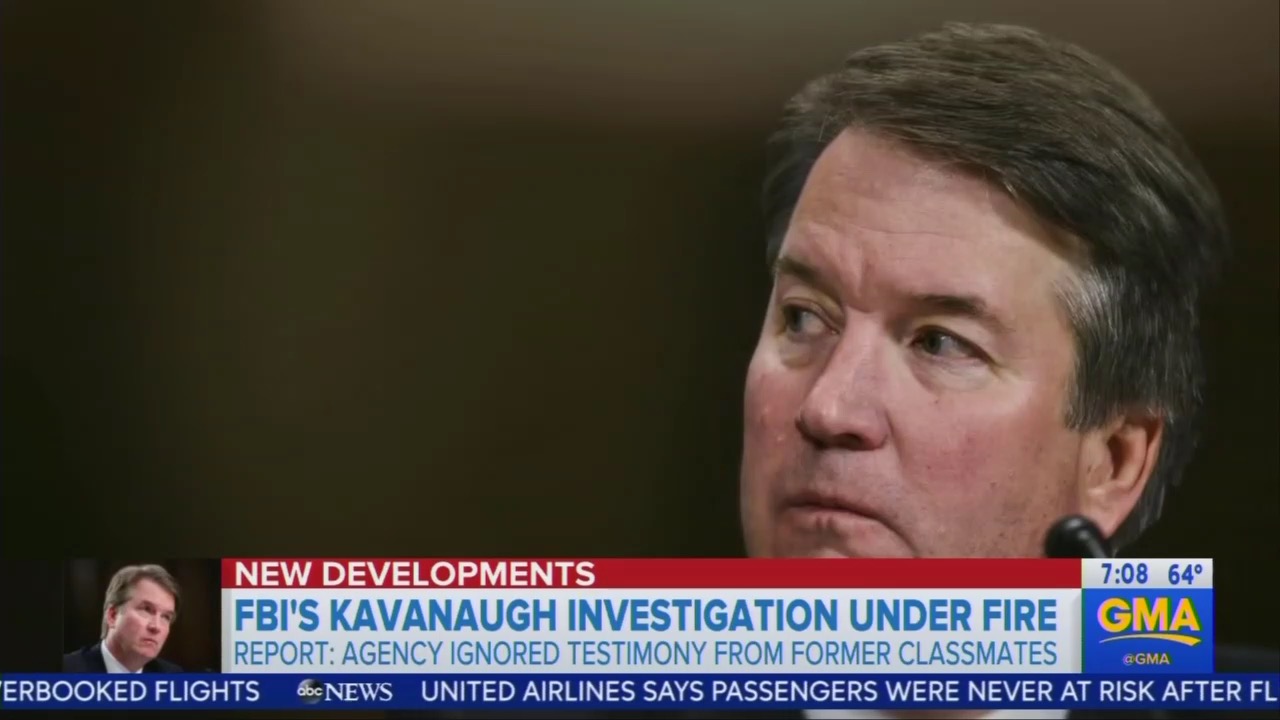 Thursday morning ABC’s Good Morning America played to Democrat concerns yet again over the FBI investigation into Brett Kavanaugh, which completed Wednesday. Correspondent Terry Moran gave a completely one-sided, anti-Kavanaugh report touting everyone who was against his confirmation complaining that the FBI investigation wasn’t conducted how they wanted.

Anchor Robin Roberts led into Moran’s report noting the investigation was being scrutinized thanks to a report in the New Yorker by Ronan Farrow claiming that key witnesses to Ford, and second accuser Debbie Ramirez’s allegations were not interviewed:

The FBI investigation of Judge Kavanaugh is under the microscope this morning. A new report claims the agency chose not to interview several people who knew the nominee in high school or college and these were people who wanted to tell their stories.

“This FBI investigation was fast. It was limited and several potential witnesses are now claiming it was incomplete,” Moran gushed. He added that “key witnesses” were “frustrated” they were “ignored” by the FBI, while Ford’s attorneys slammed those directing the investigation (ie: Trump) as “not interested in seeking the truth.”

Moran repeated again the concern that this investigation wasn’t finished, citing, “multiple classmates of Brett Kavanaugh” who worry “the investigation is incomplete.”

Moran also let a former dorm roommate air their uncorroborated allegations against Kavanaugh that he was a sloppy drunk in college, who lied under oath about “blacking out.” But Moran didn’t interview any of Kavanaugh’s friends or peers who paint a completely different picture of the Supreme Court nominee.

Finishing up his report, Moran worried that the investigation was not satisfactory because of “political pressure” from Republicans trying to speed up the process:

“The speed and the political pressure on the FBI here seems to have left some possible witnesses unheard and perhaps some stones unturned,” he asserted.

ROBIN ROBERTS: The FBI investigation of Judge Kavanaugh is under the microscope this morning. A new report claims the agency chose not to interview several people who knew the nominee in high school or college and these were people who wanted to tell their stories. ABC's senior national correspondent Terry Moran is in Washington with more. Good morning, Terry.

TERRY MORAN: Good morning, Robin. This FBI investigation was fast. It was limited and several potential witnesses are now claiming it was incomplete. Overnight potential key witnesses in that FBI investigation are speaking out. They're frustrated after they say they were ignored by agents investigating claims of drunken sexual assault by Supreme Court nominee Brett Kavanaugh. In a statement overnight attorneys for Dr. Christine Blasey Ford who accuses Kavanaugh of sexually assaulting her in high school, her lawyers saying, we are profoundly disappointed after the tremendous sacrifice she made in coming forward those directing the FBI investigation were not interested in seeking the truth.

And in a new report by Ronan Farrow of the New Yorker magazine, multiple classmates of Brett Kavanaugh say they worry the investigation is incomplete. Kavanaugh accuser Debbie Ramirez telling "The New Yorker" she's alarmed to the fact that people who were key to corroborating my story were not contacted, adding, I feel like I'm being silenced. His dorm room neighbor Kenneth Apple.. He said he was 100% certain that an eyewitness told him Kavanaugh was the man who exposed himself to Ramirez within one or two days of the alleged incident. "The New Yorker" says it contacted that eyewitness who did not remember the incident. These concerns shared by Kavanaugh's freshman roommate James Roche.

JAMES ROCHE: If I was looking to understand the facts I would look for people who had firsthand information about it and try to determine what they know and didn't know and that hasn’t happened.

MORAN: Roche says he was stunned to hear his old roommate portrayed himself as a moderate drinker with no capacity for disrespecting women in his college days.

KAVANAUGH: You’re asking about blackout, I don’t know, have you?

MORAN: Roche says that testimony drove him to come forward.

ROCHE: It surprised me a lot to hear him say that he never blacked out, because, you know, I would be in the room and he would come down and he was slurring and he was yelling and making loud noises and, you know, yeah, very drunk.

MORAN: It was always going to be challenge for investigators to find corroboration for allegations that were so old and when some of the key possible witnesses were admittedly drunk but the speed and the political pressure on the FBI here seems to have left some possible witnesses unheard and perhaps some stones unturned.