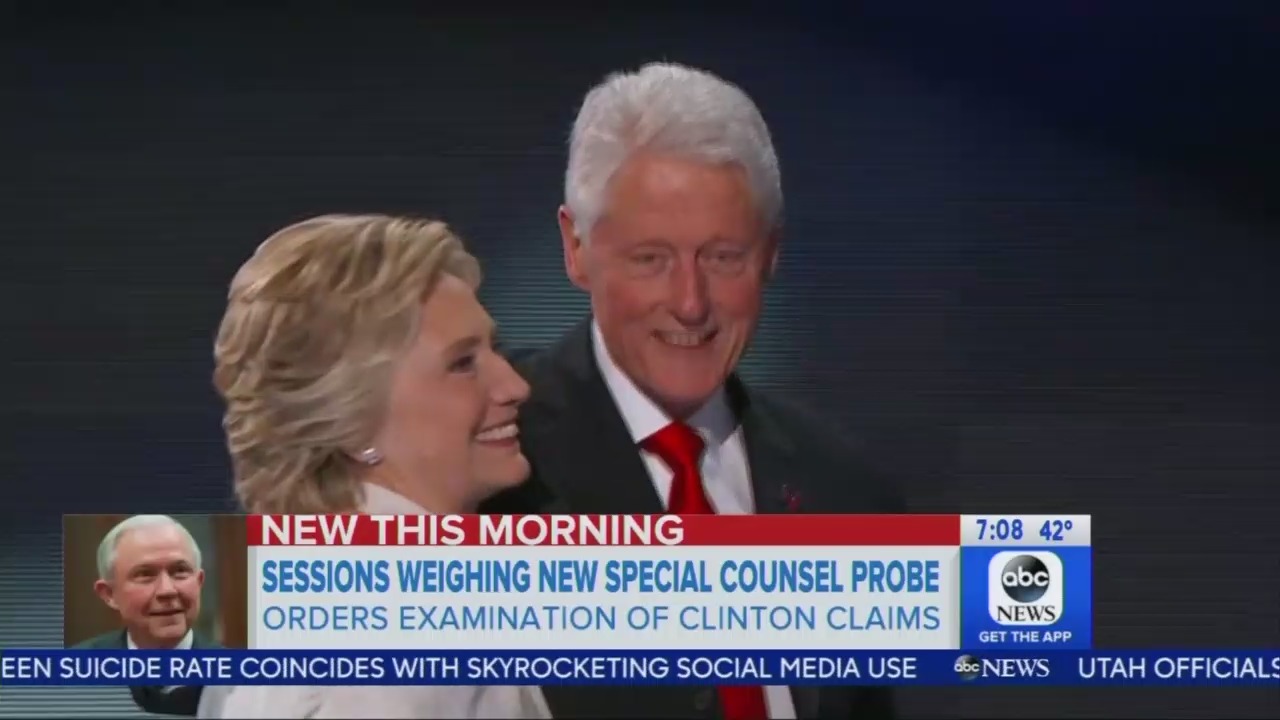 It seems the media can always find a new excuse as to why the Clintons’ numerous scandals over the years should be overlooked. Tuesday morning, the networks dismissively treated reports that Attorney General Jeff Sessions would be looking into hiring a special prosecutor to investigate the Clinton Foundation’s dealings with Uranium One and Hillary Clinton’s e-mails, casting blame on Sessions instead. All three networks also characterized the potential investigation as a partisan hack job orchestrated by President Trump against his former election “rival,” instead of against the former Secretary of State.

ABC was the sole network to give a full report to the story, but treated it as Sessions’ problem, not the Clintons, straight from the opening line of the report. “[Jeff Sessions] will be on the hot seat today after revelations overnight he's asked Justice Department prosecutors to examine the Clinton Foundation and Hillary Clinton's e-mails despite promises to recuse himself from those matters,” anchor George Stephanopoulos laid the groundwork for correspondent Mary Bruce’s report.

Calling it a “controversy,” Bruce adopted the Democrats rhetoric, suggesting this was a Republican conspiracy against “Trump’s former rival, Hillary Clinton.”

He's being greeted with a new controversy. Attorney General Jeff Sessions authorizing the Justice Department to consider a special counsel to look into allegations regarding Trump's former rival, Hillary Clinton. In a letter to the House Judiciary Committee the Justice Department suggests prosecutors would examine allegations that donations to the Clinton Foundation influenced a decision by the Obama Administration to allow a Russian agency to buy the Nuclear One company writing “prosecutors will make recommendations as to whether any matters not currently under investigation should be opened or whether any matters merit the appointment of a special counsel.” But after his involvement in the Trump campaign, Sessions pledged to steer clear of Clinton related investigations.

“That's not the outcome the president was hoping for,” she touted, playing a clip of President Trump asking the DOJ to investigate John Podesta:

She ended her report by casting doubt on Sessions’ credibility yet again, by touting Democrats “sounding the alarm” over Sessions' impartiality, saying he would “face some harsh questions” from Senate Democrats:

Now critics are already sounding the alarm. The top Democrat on the House Intelligence Committee tweeting “if the A.G. bends to pressure from the president and his allies and appoints a special counsel to investigate Trump's vanquished rival it could spell the end of the DOJ as an independent institution.” Now, guys, Sessions is set to testify on the hill later this morning. And you can be sure he's going to face some harsh questions.

NBC’s Kristen Welker also dismissed the investigation into Clinton as partisan hackery, on Today, calling it a “Republican concern:”

Attorney General Jeff Sessions is considering the idea of appointing a second special counsel, a number of Republican concerns, some involving Hillary Clinton and that controversial sale of a uranium company to Russia. This comes after the president has repeatedly called on the DOJ to aggressively probe Democrats and as Sessions faces another grilling on Capitol Hill today about the Trump campaign's contacts with Russia. Adding pressure, the fact the president's eldest son is also under a bright spotlight for his communications with Wikileaks.

CBS This Morning took a different approach in their coverage of Clinton, instead, spending more of their time doubting AG Sessions’ character and impartiality.

Leading it’s report on Sessions with a chyron that read, “What did Sessions know?” (about Trump’s ties to Russia) at the bottom of the screen, anchor Gayle King opened by noting that recent testimony from Trump campaign aides “contradicted” Sessions’ previous testimony.

Correspondent Paula Reid hyped “Capitol Hill has really become a land mine” for Sessions, with this new information that “contradicts his previous testimony before Congress.”

She continued to suggest Sessions may have been lying under oath:

Sessions has repeatedly testified that he had no knowledge of any contacts between the trump campaign and Russia. But former Trump campaign aides Carter Page and George Papadopoulos have revealed that they both told Sessions about their contacts with Russia. Papadopoulos told the FBI that during the campaign, he suggested a meeting between then candidate Trump and Vladimir Putin in front of Trump and Sessions and Sessions shut down that. Jeff Sessions had to recuse himself from the Russia investigation for failing to disclose his own contacts with the Russian ambassador.

“I imagine there will be fireworks,” anchor Norah O’Donnell noted, before getting to the Clinton investigation. “Paula, what about the Attorney General now asking his prosecutors to open up a new Russia probe?” she asked.

Reid blandly gave the rundown of the case before the Justice Department, treating it as a nothingburger. “Of course this new revelation will also give Republicans a more friendly line of Russia questioning for the Attorney General today,” she said dismissively.