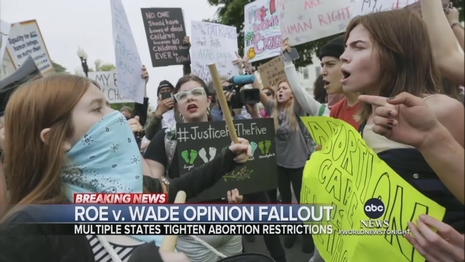 Late Tuesday night, violent pro-abortion mobs took the streets in Los Angeles to express their rage over the leaked Supreme Court draft opinion overturning Roe v. Wade and handing the abortion issue back to the states to decide. In videos posted to Twitter and reported online by Fox News and The Daily Caller, among other reputable outlets, the violent left-wing abortion activists were seen attacking police officers.

While all three networks mentioned protests taking place across the country, none of the big three evening news broadcast programs reported on the violence that took place across the city. Instead, they showed images of peaceful abortion advocates chanting in front of the Supreme Court or marching down the city streets with protest signs.

According to a report by Fox News, the pro-abortion protests in downtown Los Angeles which started off as a peaceful group of thirty turned violent with a mob of over 250 people “clash[ing] with law enforcement after officers were called to disperse the crowds, resulting in the injury of at least one officer on Tuesday night.” The abortion activists we’re also seen throwing objects at police officers, which led to one officer's injury, according to the same report.

Los Angeles: Law enforcement push back far-left pro-abortion rioters & try to make an arrest but are threatened by the mob. One of the militants police try to arrest escapes. Rioters smashed up a DHS vehicle. An unlawful assembly was later declared. pic.twitter.com/nylvqmzkdS

Instead of covering violence by a mob enraged over a draft court decision by the nation’s highest judicial body, ABC World News Tonight’s David Muir reported that there were simply “protests and demonstrations, crowds gathering at the Supreme Court.” And he bemoaned how the news that the court is on the verge of overturning Roe v. Wade is “only heightening concerns that the highest court in the land has become even more politicized.”

On CBS Evening News, senior White House correspondent Ed O’Keefe briefly reported that at “the Supreme Court and across the country today Americans took to the streets to protest the potential end of Roe versus Wade.”

Meanwhile, on NBC Nightly News chief White House correspondent Peter Alexander likewise ignored the violent riots and focused on how President Joe Biden claimed that the overturning of Roe v. Wade “could lead to the unraveling of other privacy rights from contraception to gay marriage.”

The three evening news networks ignoring violent pro-abortion riots were made possible by Prevagen on ABC, Prudential on CBS, and Liberty Mutual on NBC.

To read the relevant transcripts of each segment click "expand":

DAVID MUIR: Good evening and it's great to have you with us here on a Wednesday night. The shockwaves felt across this country tonight. Americans on both sides of a deeply personal issue, abortion rights. After that unprecedented leak of the Supreme Court draft opinion showing five conservative justices ready to overturn Roe versus Wade. And while the court says it is not the final opinion, across this country, the reaction now to the idea that after 50 years, Roe versus Wade could be overturned in a matter of weeks. The protests and demonstrations, crowds gathering at the Supreme Court again today. The leak only heightening concerns that the highest court in the land has become even more politicized. Chief Justice John Roberts, who called the leak an egregious breach, has now tapped the court's marshal Colonel Gail Curley to lead the investigation into the leak. And President Biden warning again today the landmark decision is about more than abortion, saying of former President Trump's movement, quote, “Maga is the most extreme political organization that's existed in recent American history”. If the final ruling does overturn Roe, 26 states are ready to ban abortion likely very quickly, including 13 states that have so-called trigger laws that ban it immediately. Tonight, we take you to those states ahead of any decision that could be coming from the court, imposing new restrictions already. The women who have made very difficult decisions because of that, and the women who are cheering on those states. ABC's Rachel Scott leading us off tonight.

RACHEL SCOTT: Across America, from San Francisco to Michigan to Texas to the steps of the Supreme Court, women on both sides of the abortion debate taking to the streets after the draft of a coming Supreme Court decision revealed Roe versus Wade is likely to be overturned. This after Republican legislatures in a growing number of states already passed strict new laws making it extremely difficult to get the procedure.

MAJOR GARRETT: Now to the fallout following the unprecedented leak of a draft Supreme Court opinion overturning the 1973 landmark Roe versus Wade decision that legalized abortion, demonstrations for and against were held across the country as some Democratic Governors hurried to shore up abortion rights. Here’s CBS’s Ed O'Keefe.

ED O’KEEFE: At the Supreme Court and across the country today Americans took to the streets to protest the potential end of Roe versus Wade. Asked about the leaked draft opinion, President Biden took a swipe at former President Donald Trump and his GOP coalition who helped him stall the court's conservative majority.

PROTESTERS: Shut it down!

PROTESTERS: Shut it down!

ALEXANDER: President Biden insisting that leaked draft opinion that would overturn Roe v. Wade could lead to the unraveling of other privacy rights from contraception to gay marriage.