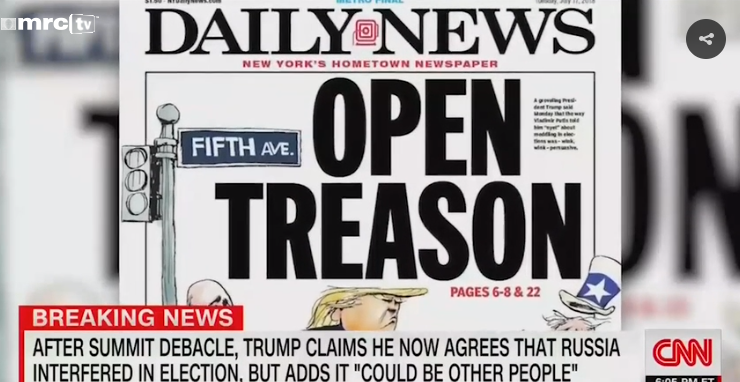 Okay. Let’s get this out of the way at the outset.

The Trump press conference in Helsinki was a misstep. Which was corrected when seriously responsible people like former House Speaker Newt Gingrich stepped up to the plate and respectfully said so.

But. The but comes from the massive - and I do mean massive - media meltdown that instantly followed.  Typical of the breed was my old colleague David Gergen over at CNN, who said in a discussion with Anderson Cooper (who himself called the presser an “embarrassment”):

“I’ve never heard an American President talk that way but I think it is especially true that when he’s with someone like Putin, who is a thug, a world-class thug, that he sides with him again and again against his own country’s interests of his own institutions that he runs, that he’s in charge of the federal government, he’s in charge of these intelligence agencies, and he basically dismisses them and retreats into this, we’ve heard it before, but on the international stage to talk about Hillary Clinton’s computer server …”

“I think that sums it up nicely. This is the president of the United States essentially taking the word of the Russian president…over his own intelligence community. It was astonishing, just astonishing to be in the room with the U.S. president and the Russian president on this critical question of election interference, and to retreat back to these talking points about DNC servers and Hillary Clinton’s emails when he had a chance right there in front of the world to tell Vladimir Putin to stay the HELL out of American democracy, and he didn’t do it.”

Now. Let’s put aside both the misstep and the correction - and something else that, undiscussed but of course, is as obvious as the sun in a blue sky: Namely, no American president who has met with their Russian counterpart has ever…say again, ever - stood or sat next to them in a public setting and chastised them. As David Gergen would well know, Ronald Reagan was more than capable of talking about the Soviet Union as an “Evil Empire” and saying “Mr. Gorbachev, tear down this wall.” But never in a million years would or did Reagan say those things while standing next to Gorbachev. The tough talk - and there was tough talk - was reserved for the meetings out of camera range.

But this is not the point. The real point is that the massive media meltdown over Helsinki was far from the first time this has happened in the Trump era.

Recall all the hyperventilating when Trump withdrew the United States from the Paris Climate Accords? Let’s go back in time to the far distant June of 2017 as Deadline Hollywood captured the reaction of international media to the withdrawal. (And no, I’m not making this up.)

“International media reacted largely in horror to President Donald Trump’s decision to pull the U.S. out of the historic Paris Accord on Climate Change on Thursday with many major news outlets slamming the former reality TV star for the move.

Got that? The media reacted “in horror.” And alas, an overstatement that is not.

From the Paris Accords lets move on to Trump FCC chief Ajit Pai’s successful mission to end “net neutrality”. It caused so much media consternation that Newsmax finally ran this story that discussed the result of just how crazy the dire media coverage of Pai’s decision had been: “FCC Chair, Family Still Receive Death Threats Over Net Neutrality.”

“Federal Communications Commission chairman Ajit Pai said Monday he tries to hide his appearance while traveling as he and his family still receive death threats because of his decision to end net neutrality.

Oh yes….if you are actually reading this on the net you may have guessed that all the media horror stories that net neutrality would kill the Internet were, um, bunk.

“The February 2018 stock market correction was painful to watch, but the news media exaggerated the situation — piling on panic and blame with descriptions like “crash” and “freefall” — after ignoring most previous records.”

She detailed the media anxiety flowing from venues like - shocker! - The New York Times, The Washington Post, The Los Angeles Times and ABC World News Tonight, among others.

So what do we have here? What do the very different topics of a press conference with Vladimir Putin, the US withdrawal from the Paris Climate Accords, net neutrality and tax cuts have in common that they would all generate such reflexive hysteria in the media?

Your one guess is correct: Donald Trump.

While all of this reflexive hysteria can and does amuse, in one sense it simply isn’t funny at all. Every child learns somewhere the Aesop Fable of the boy who cried wolf. Wikipedia boils the fable down to this description:

“The tale concerns a shepherd boy who repeatedly tricks nearby villagers into thinking wolves are attacking his flock. When a wolf actually does appear and the boy again calls for help, the villagers believe that it is another false alarm and the sheep are eaten by the wolf.”

This problem is, in one sense, already manifesting itself in all those stories about CNN’s amazing ratings slide, as noted here or any number of places. A diet of hysterical “Stormy Daniels! Stormy Daniels!” coverage is precisely the kind of thing that causes millions of Americans to roll their eyes - and tune out.

One gets the fact that the media hates Trump. But this should never preclude media outlets from doing their job of presenting news in a hard,serious, non-hysterical fashion. Instead of doing so with a hysteria that at bottom is really designed to zing the President over Topic A, B or C…or X, Y and Z.

But unfortunately what we have today is a media that cries wolf - and it isn’t good.