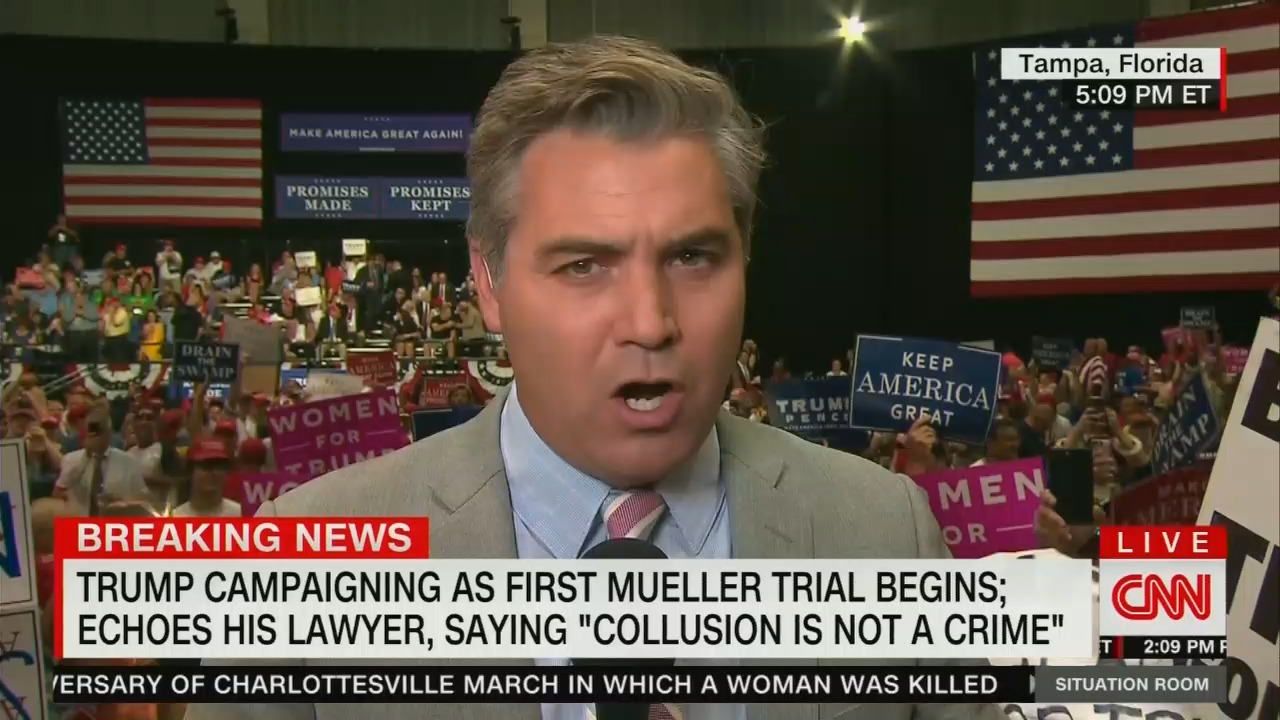 It’s not just President Donald Trump, White House press secretaries Sean Spicer and Sarah Huckabee Sanders who think Jim Acosta is out of control. Even some of his journalist colleagues think his antics are bad for journalism.

Some of his peers, including liberal ones, have been complaining about Acosta long before his November 7 press conference theatrics that got him suspended by the White House.

Way back in January of 2017, The Hill’s Joe Concha, appearing on FNC’s MediaBuzz, ripped into Acosta as “entitled” and “obnoxious” when he tussled with then-President-elect Trump. Concha accused the CNN White House correspondent of “grandstanding”: “I wonder why Jim Acosta felt that he was entitled – more privileged than the other 250 reporters that were in that room by repeatedly yelling no more than 14 times at a President-elect, demanding that he be afforded the right to ask a question. I found that to be grandstanding.”

Concha also took a shot at Acosta’s bosses (who sued the White House over the suspension): “CNN, that morning, around 5:45, reserved eight seats for themselves in the front row by putting reserved signs down there, effectively boxing out other news organizations that wanted that kind of access....CNN’s behavior here, I have to say has been – in Jim Acosta’s case, making about himself, making himself the story, and CNN – eight reservations...that’s just obnoxious.”

Politico’s Ben Strauss, in a September 21, 2017 profile piece of Acosta, reported that even some of Acosta’s fellow CNN colleagues view him as a liberal cheerleader. Strauss featured this anonymous quote from a “senior person” at CNN: “There’s some grumbling in the rank-and-file that this isn’t straight news.” But that’s okay because “the higher up you go, the more people like what Jim’s doing or he wouldn't be doing it."

The article indicated that Acosta’s activist, left-wing attacks on the Trump White House are a “conscious effort” to build his brand:

Acosta, by informal acclamation of his peers, is considered the reporter most likely to become part of the news story of any given day. “He understands that this is a big show, he’s seen the Saturday Night Live parodies and he’s made a conscious effort to become one of the notable characters,” said a senior reporter who sits toward the front of the briefing room.

The journalist clearly views himself as a heroic fighter against the tyrant Trump. As noted by Politico:

Acosta took a last sip of his beer, content that he was on the right side of history. “People are going to look back at this moment and ask each and every one of us, ‘What did you do when [Trump] was doing this in America?” he said. “‘What role did you play?’” 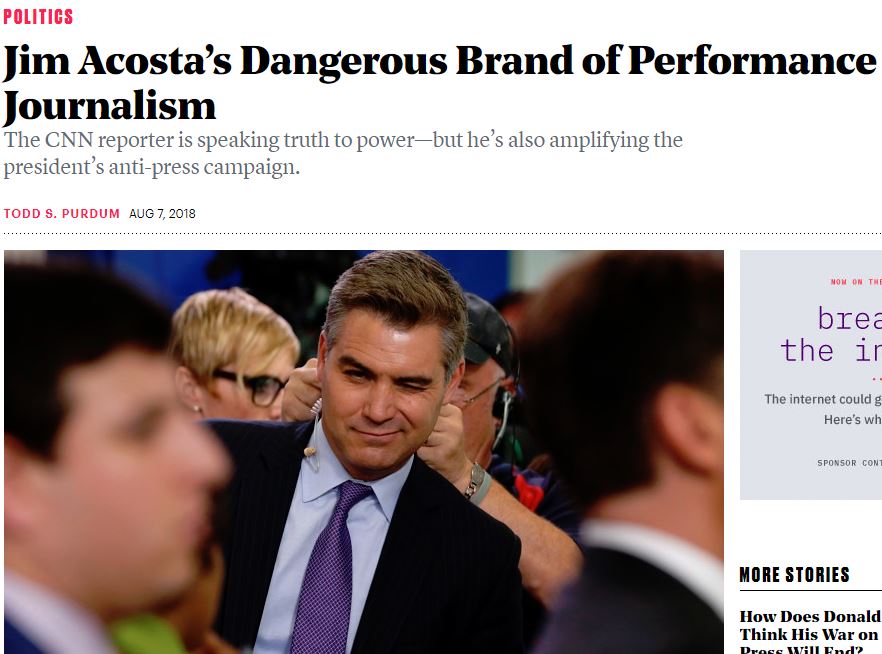 And on August 8, 2018 there was some surprise criticism from lefty outlet The Atlantic,as staff writer Todd S. Purdum called out Acosta for violating a basic journalistic tenet by becoming part of the story:

But acknowledge this also, please: Whenever a reporter who has not been kidnapped by terrorists, shot by an assailant, or won a big prize becomes an actor in her own story, she has lost the fight. Or in this case, reinforced the corrosive, cynical, and deeply dangerous feedback loop that has convinced Trump’s most fervent supporters that his relentless brief against the press has merit: FAKE NEWS! SAD!

These are parlous times for a free press, and any reporter who defends First Amendment values and virtues should be applauded. I’m loath, as a brother in the trade, to criticize Acosta or his motives. But as that subversive British student of free expression Noël Coward once memorably put it: “There’s a right way, and a wrong way; there’s a weak way, and a strong way. Take it easy. Drive with caution when the road is greasy: Wait a bit, wait a bit, Joe.”

For more on Acosta check out these articles:

MRC’s Brent Bozell: ‘CNN’s Lawsuit Is Ridiculous’; Network Is a ‘Hit Squad’ for the Left