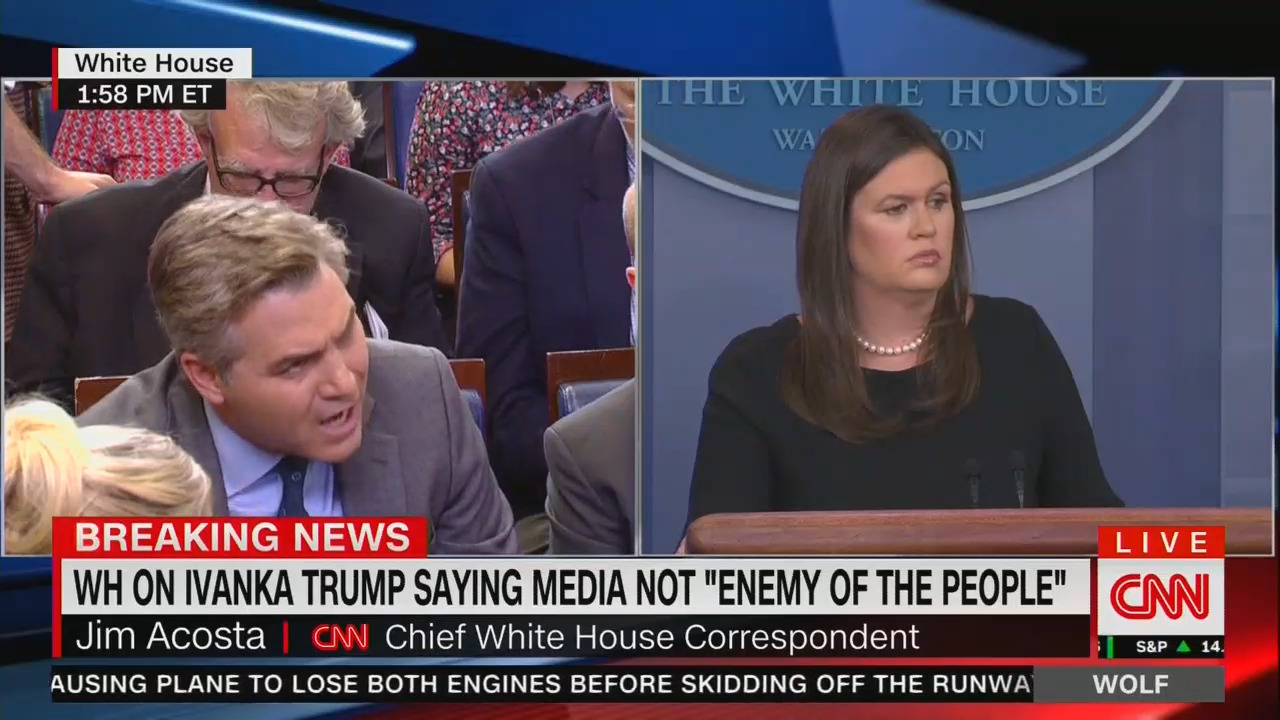 Heading into Jim Acosta’s triumphant appearance on CBS’s The Late Show Wednesday night, CNN’s chief White House correspondent received some surprise criticism from lefty outlet The Atlantic as staff writer Todd S. Purdum called him out Tuesday for living up to the verb closely associated to his name (accost) and making himself the story when it should be reporting the news.

Purdum referred in the piece (entitled “Jim Acosta’s Dangerous Brand of Performance Journalism”) to Trump as being “Stalinist,” but his take carried more weight considering the fact that he was a New York Times White House correspondent in the 1990s during the height of Bill Clinton’s chicanery.

To Purdum’s credit, he spent three lengthy paragraphs essentially admitting how pointless White House Press Briefings having become, dubbing it “a circus of reportorial self-expression, and sometimes sel-promotion.” He also cited an instance where he tussled with then-Press Secretary Mike McCurry in 1996 and realized that the spotlight he gained wasn’t “valuable” to his job of reporting.

Purdum spent most of the piece through the lens of Acosta’s August 2 verbal duel with Press Secretary Sarah Huckabee Sanders when he asked her to condemn the President’s repeated assertion that the news media are the “enemy of the people” and, of course, Sanders didn’t take the bait.

Spilling plenty of ink condemning Trump, Purdum had plenty left for Acosta and pointed out that a reporter shouldn’t be the story and going about a precarious situation doesn’t necessary call for a bellicose response (click “expand” for more)

But acknowledge this also, please: Whenever a reporter who has not been kidnapped by terrorists, shot by an assailant, or won a big prize becomes an actor in her own story, she has lost the fight. Or in this case, reinforced the corrosive, cynical, and deeply dangerous feedback loop that has convinced Trump’s most fervent supporters that his relentless brief against the press has merit: FAKE NEWS! SAD!

These are parlous times for a free press, and any reporter who defends First Amendment values and virtues should be applauded. I’m loath, as a brother in the trade, to criticize Acosta or his motives. But as that subversive British student of free expression Noël Coward once memorably put it: “There’s a right way, and a wrong way; there’s a weak way, and a strong way. Take it easy. Drive with caution when the road is greasy: Wait a bit, wait a bit, Joe.”

As for the exchange, Purdum accurately noted that Acosta “interrupted [Sanders] repeatedly, finally allowing her to reply” then “cut off his colleagues to demand a follow-up, which elicited yet another demurrer from Sanders—at which point he got up and walked out of the briefing room.”

He explained that he’s “never met Acosta,” but he still “wonder[s] why Acosta didn’t know better, why he ever thought he might elicit from Sanders—who has defended her boss in ways arguably far more outrageous than the one for which he was attempting to make her repent—any answer other than the nonanswer, hostile back-atcha response she gave.”

Just as he did later, Purdum gave Acosta some advice (click “expand” for more):

I once read some good advice from a journalist —was it Nicholas Lemann?—who suggested that no profile writer should ask a hostile question if he didn’t believe it would produce a meaningful, revealing answer. Did Acosta really think his interrogatory to Sanders would? Did he think it would make the CNN suits sit up and say howdy? Who knows, but he has engaged in similar jousting in the past, asking Trump’s policy adviser Stephen Miller how the poem on the base of the Statue of Liberty....could possibly jibe with Trump’s harsh anti-immigration policy....Indeed, it is the working journalist’s first maxim to show, not tell; to do, not say; to explain, not exhort; to omit, as E. B. White advised, “needless words.”

In his conclusion, Purdum was more blunt in condemning Acosta’s “florid” and “vivid” “confrontation” as “play[ing] directly into Trump’s received narrative about a hostile, combative, and even unfair press” which, in the view of this space, is anything but fake news.

The Atlantic writer ended with even more advice that Acosta undoubtedly will ignore:

The last thing Trump—or the press, or the public—needs is another convenient villain in the performative arena of the long-running reality show that is his administration. Acosta’s broadside blurs the line between reporting and performance, between work and war, at a time when journalists have a greater obligation than ever to demonstrate that what they do is real, and matters—and is not just part of the passing show.