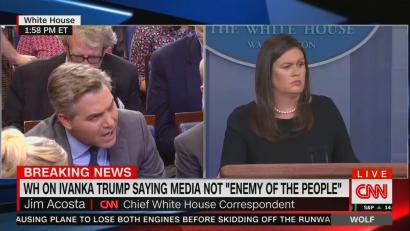 CNN White House correspondent Jim Acosta – during the Trump administration – has shouted at and talked over press secretaries Sean Spicer and Sarah Sanders. He has interrupted his fellow White House press corp colleagues, called the President himself “fake news” and even screamed at Trump as he was talking to children at the annual Easter Egg roll.

The following montage is just a sample of Acosta’s disruptive behavior while enjoying his privilege as Chief White House correspondent for CNN.

Jim Acosta is Out of Control

For more episodes of Acosta acting out, see these NewsBusters articles:

WAR: Trump Battles Acosta: CNN Is Awful and You Are a ‘Rude’ and ‘Terrible’ Person