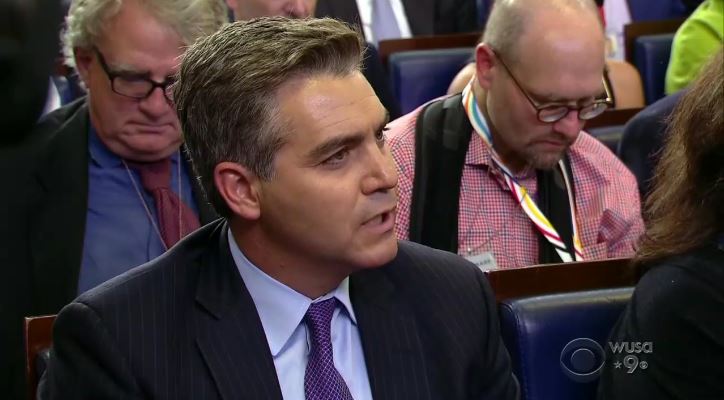 Even some of his colleagues at CNN view Jim Acosta as a liberal cheerleader. That’s the conclusion in a new Politico Magazine profile piece. The September 21 story featured this anonymous quote from a “senior person” at CNN: “There’s some grumbling in the rank-and-file that this isn’t straight news.”

But that’s okay because “the higher up you go, the more people like what Jim's doing or he wouldn't be doing it."

The article by Ben Strauss indicated that Acosta’s activist, left-wing attacks on the Donald Trump White House are a “conscious effort” to build his brand:

Acosta, by informal acclamation of his peers, is considered the reporter most likely to become part of the news story of any given day. "He understands that this is a big show, he's seen the Saturday Night Live parodies and he's made a conscious effort to become one of the notable characters," said a senior reporter who sits toward the front of the briefing room.

The journalist clearly views himself as a heroic fighter against the tyrant Trump. As noted by Politico:

Acosta took a last sip of his beer, content that he was on the right side of history. “People are going to look back at this moment and ask each and every one of us, ‘What did you do when [Trump] was doing this in America?” he said. “‘What role did you play?’”

As mentioned by the MRC’s Tim Graham, Acosta has defended his anti-Trump bias this way: “Let other people be the wallflower.”