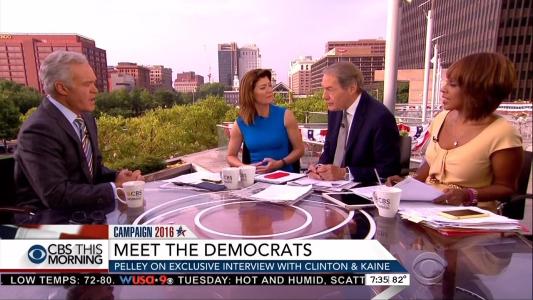 Scott Pelley and the CBS This Morning crew, on Monday, made the sales pitch for Hillary Clinton’s Tim Kaine VP selection. The CBS Evening News anchor, invited on to recap his 60 Minutes interview with the Democratic ticket, proclaimed of the pair “they look terrific” and “they were finishing each other’s sentences.”

His CBS colleague Charlie Rose hailed they had “perfect chemistry.” And fellow This Morning co-host Gayle King insisted that Kaine needed to stop calling himself “boring.”

UPDATE: This is in sharp contrast to the review CBS This Morning hosts, on July 18, gave the Donald Trump and Mike Pence dual interview. Correspondent John Dickerson noted: “These men [Trump and Pence] don’t know each other very well. And so when Mike Pence testified to what a good man Donald Trump was, it seemed less evidence of long time spent together, you know, in a fishing cabin and getting to know each other intimately and more like the talking point that we heard from Paul Manafort.”

Rose observed that Trump “frequently” interrupted Pence to which King added: “They are using words like excruciating and awkward marriage” to describe the interview.

Norah O'Donnell chimed in with a question to guest and former Mitt Romney adviser Dan Senor: “After Trump chose Pence, you tweeted and said this was disorienting because you had talked to Pence in which he talked about his dislike of many things that Trump espouses.”

The following is the relevant exchange on the Clinton-Kaine interview as it was aired on the July 25 CBS This Morning:

CHARLIE ROSE: What is interesting, he [Tim Kaine] was Barack Obama’s favorite senator. Obama liked him a lot.

SCOTT PELLEY: He was almost Obama’s pick for vice president.

ROSE: Exactly. And now they seem to have come together with, like, perfect chemistry.

PELLEY: Well, that’s true. And the fascinating thing, they look terrific in the interview together. They were finishing each other’s sentences but they don’t know each other well. And I was surprised by that. They’ve known each other professional and casually. But they came across in the interview as two old friends and that’s really not the case. They are just getting to know each other.
...
GAYLE KING: I was surprised to hear though that they haven’t known each other long because they were very at ease each with other. Did you find him boring? I almost think some people say he needs to stop saying that “I’m boring.”

PELLEY: Yes, he does. Because that’s inaccurate.