Mauled in the Morning: GOP Candidates Hit from the Left 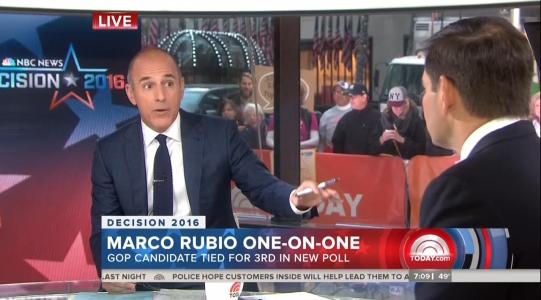 As the Republican candidates prepare to meet in their fifth cable news debate, they’ve also been participating in what might be considered a year-long, slow-motion debate on the broadcast TV morning news shows.

An MRC analysis of interviews from January 1 to December 4 finds the broadcast networks have pounded the candidates with a blizzard of hostile and left-wing questions.

Most stunning when it came to policy questions, the networks hit the Republican candidates with ideologically liberal questions 85 percent of the time, compared to those based on a conservative agenda.

An MRC study of the last GOP presidential race found the same thing. From January 1 to September 15, 2011 by a 5-to-1 margin, ABC, CBS and NBC morning show hosts employed an adversarial liberal agenda when questioning Republican candidates.

In comparison, from January 1 to October 31, 2007 (during the run-up to the Democrats’ last truly-contested nomination race), the networks coddled Barack Obama, Hillary Clinton, John Edwards and the other candidates running that year with a mostly liberal agenda of questions: 72 percent left-leaning questions, vs. 28 percent from the right.

This year, there have been only five morning show interviews of Democratic candidates through December 4, (two for Hillary Clinton, and one each for Bernie Sanders, Jim Webb and Martin O’Malley). Of the 21 policy questions posed to the Democrats, two reflected conservative themes vs. five liberal questions, with the rest ideologically neutral.

The clear pattern being morning show hosts aggressively asked candidates of both parties questions from the left.

Overall across all topics (including ideological, personal, and questions about their standings in the polls) the GOP candidates faced hostile questions from the network morning show hosts by a more than two to one margin. (Details below)

From January 1 through December 4, the GOP candidates spent a combined 4 hours, 51 minutes being interviewed on the ABC, CBS and NBC morning news programs (Good Morning America, CBS This Morning and Today). Combined, these shows averaged nearly 13 million viewers each week in 2015, or nearly as many as watched the debates on CNBC and the Fox Business Network.

None of the other candidates managed to even total a half-hour of time. Ranging from Kentucky Senator Rand Paul with four interviews totaling 24 minutes down to Pennsylvania Senator Rick Santorum who had just one three-minute interview.

Over on CBS This Morning, Republican candidates faced a 6 to 1 ratio of policy questions from the left (19) than from the right (3).

ABC’s Good Morning America which tends to be less hard-news focused, even for a morning show, offered just six ideologically-framed policy questions, four of which came from the left and two from the right.

Matt Lauer’s question to Donald Trump on the Syrian refugee crisis on the October 26 Today show was representative of a policy question coming from the left: “You know the words on the base of that statue [The Statue of Liberty], it’s not a pop quiz, ‘Give Me Your Tired, Your Poor, Your Huddled Masses Yearning to Breathe Free.’ You’ve said Syrian refugees fleeing conflict in their country, the ones who come here, they are going back. They are all going back....Do they not qualify as the tired and the poor and the huddled masses yearning to breathe free?”

When Ted Cruz made the morning show rounds on March 24, he was hit with questions from the left as well. CBS This Morning’s Vladimir Duthiers demanded: “Senator, you say that if you are elected you would repeal the Affordable Care Act, but since it has passed 16 million people have become insured. So, would you take that away from them?” On the March 24 Today show, Lauer prodded the Texas Senator: “Is there room in Ted Cruz’s Republican Party for those who are socially liberal, for those who are pro-choice, for those who support gay marriage?”

Looking at the agenda of all questions (including policy, horse race, candidate controversies or biography), it becomes clear that when the GOP candidates ventured onto the Big Three morning shows, they were in hostile territory. Our analysts scored each question as to whether it was friendly or hostile to the candidate’s agenda, or neutral. For example, a friendly question would have invited a candidate to tout their own strengths, or criticize a competitor; a hostile question would do the reverse.

Excluding the neutral questions, the analysis shows hostile questions outnumbered friendly ones by a more than two-to-one margin (138 to 56). The most adversarial morning show was NBC’s Today, which hit GOP guests with three times as many hostile hardballs (68) than friendly softballs (20).

On CBS This Morning, Republican candidates were more likely to get hostile barbs (36) than friendly set-ups (17) by a 2 to 1 ratio.

On ABC’s Good Morning America the overall questions based on policy, personality, and their standings in the polls were more hostile (34) than friendly (19), by a roughly 3 to 2 ratio.

Lauer’s October 26 question to Trump was an example of a hostile question not based on policy but rather personality. “I went back and I read from your famous book, The Art Of The Deal. You wrote this, ‘I play to people’s fantasies. I call it truthful hyperbole. It’s an innocent form of exaggeration and a very effective form of promotion.’ Would it be fair to say that, that describes your campaign to date?  Is it an exaggeration and truthful hyperbole?”

Marco Rubio was also the target of Lauer’s barbs when on the October 8 show he hit the Florida Senator on his attendance record: “Twenty-nine percent of the time over the last year you not in attendance when votes were taken in the Senate. And I know you say you’re running for president, but your record before that wasn’t great either. Are you placing your own personal ambitions above your responsibilities to your constituents down in Florida?”

On the November 4 Good Morning America, Rubio faced down anchor George Stephanopoulos’s series of questions about his personal finances: “You know, this came up at the debate last week. You had to draw down on your retirement account to pay living expenses....Jeb Bush also in his campaign putting out the idea that you’re a risky bet and raising questions that came up in your past campaigns about using the Republican Party credit card down in Florida for personal use. And the Tampa Bay Times has a question about that this morning, saying that at least two years of those records are still secret. What should voters know about all of this?”

How They Handled the Democrats

The Clinton campaign didn’t seem willing to offer up their candidate for many opportunities to mess up. The former Senator from New York, Secretary of State and First Lady only showed up for two morning shows for a total of 43 minutes. Most of that interview time came in an October 5 townhall event hosted by NBC’s Today show for a total of 38 minutes. It was at this interview that Today co-anchor Savannah Guthrie tossed the following softball: “You often say you’re not running because you’re a woman, you’re running on the merits, and one of your merits is that you are a woman. So my question is, what are the merits of a female leader? What does a female leader bring that a man doesn’t?”

Clinton’s competition barely registered any time at all. Former Senator Jim Webb had just one interview totaling a little over five minutes that was aired on CBS This Morning. Vermont socialist Senator Bernie Sanders visited the Today show for just one interview that came in slightly over five minutes. Former Maryland Governor Martin O’Malley finished last with a three-and-a-half minute interview on Good Morning America.