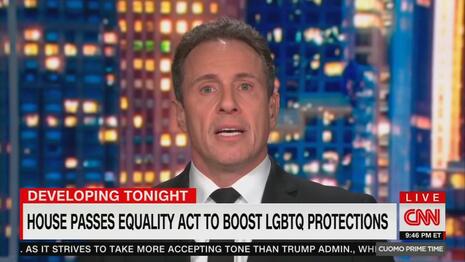 During the entire softball interview, solely predicated on emotions, Cuomo never once informed viewers of what the bill actually meant or how it would potentially affect their lives. Instead, he argued in favor of the act and contended that it's passage is so essential that it could be effectively used to make the case for eliminating the filibuster:

"Even with the House passing the Equality Act, and, by the way, that may become one of the strongest arguments to get rid of the filibuster—for another day. The Equality Act is a landmark piece of legislation that would ban discrimination against LGBTQ Americans. Remember, the gay marriage case was only a start. If they don't have federal protection, like color, creed, sex, forget it. You're going to fight this case by case. So now there's another ugly feud brewing on Capitol Hill."

Of course, painting Newman as the victim, Cuomo provided viewers with — substantially one-sided — background on the recent events that transpired in the hallway that the two congresswomen have to share.

Cuomo failed to note that Newman was actually the one who started the feud. Instead, Newman told Cuomo that she put the transgender-pride flag up because she was “simply expressing [her] support for [her] daughter and the greater LGBTQ community.” Newman went on to say that she “was making a statement about seeing the community, seeing LGBTQ folks, embracing them and respecting them.”

Newman’s tweet, however, was completely at odds with the illustrious farce she provided Cuomo during the interview. Tagging Greene, Newman pettily tweeted, “Thought we’d put up our Transgender flag so she can look at it every time she opens her door.” The videographer was careful to pan wide enough to ensure that viewers could see Greene’s office diametrically across the hall.

Does that sound like expressing "support" for her child to you?

In response to Newman’s flag placement, Greene tweeted her own video of her mounting a sign — accurately — proclaiming that there are only two genders.

Neither Cuomo nor Newman mentioned any of the freedom-restricting repercussions of the Equality Act, nor did they discuss any of the actual language or content of the bill. In fact, Cuomo didn’t ask Newman to expound upon the content of the bill that her colleagues in the House recently passed at all.

Instead of asking tough, objective questions and providing his audience with facts to allow them to formulate their own opinions, Cuomo resorted to his usual demagoguery. He asked Newman “what did it mean” to her to see Greene’s sign, and he denounced those in opposition to the Equality Act as morally inferior.

According to the Alliance Defending Freedom, if the Equality Act becomes law, it will profoundly affect and limit various liberties Americans enjoy, ranging from their explicit rights to worship and speak freely to their implied right to the freedom of association.

Cuomo concluded the segment by emphatically stating that Newman is welcome back on his show anytime she wants. Indeed, he encouraged her to come back relatively soon so that she could use his show to attempt to convince members of the Senate to pass the Equality Act.

Cuomo’s inexorable championing of legislation that has the potential to circumscribe the freedoms of millions of Americans was brought to you, in part, by Keeps. Contact this advertiser and others via the Media Research Center’s Conservatives Fight Back, conveniently linked here.

CHRIS CUOMO: Even with the House passing the Equality Act, and, by the way, that may become one of the strongest arguments to get rid of the filibuster—for another day. The Equality Act is a landmark piece of legislation that would ban discrimination against LGBTQ Americans. Remember, the gay marriage case was only a start. If they don't have federal protection, like color, creed, sex, forget it. You're going to fight this case by case. So now there's another ugly feud brewing on Capitol Hill. And once again, you have the ugliest member of the GOP-Q, is there at the center. It all started Wednesday. On Wednesday, the Democratic Representative, Marie Newman, she's got a transgender daughter, okay? She posted this video of herself hanging a pink and blue transgender-pride flag outside her office door. It's in the interest of what we used to call tolerance. Greene, right, the QAnon kook, who sits directly across from Newman, is a vocal opponent of the Equality Act. That's okay, that's politics, but how do you show that? In response to the flag, Greene makes her own video posting this: an antagonizing sign that completely demoralizes all people who are non-binary. There are two genders, male and female. Trust the science. Which is, of course, irony, because she doesn't believe in any science. She's a QAnon freak. She also aimed a tweet at Newman's child, quote, your biological son does not belong in my daughter's bathrooms, locker rooms, and sports teams. Now, this speaks to an ignorance of transgender people. The last thing a transgender kid wants to do is show off a difference anatomically from any other kid. This has always been a boogie man that some grown up, some man was going to come in to a girls' bathroom. It's always been a boogie man. The cases aren't there, and it's just ugly. Congresswoman Newman joins me right now. And I gotta tell you, I thought we were past this. I thought we were better than this. At least on the congressional level. I get that there are people out there, because of some faux sense of religion or some, you know, faux understanding of science, they want to judge. That's their right. And it's your right and job to try to persuade, but what did it mean to you to have a member of Congress act like somebody who you would have to deal with as a fringe at a town hall?

CONGRESSWOMAN MARIE NEWMAN (D-IL): Well, first, thank you for having me this evening, Chris. Uh, this is a great opportunity, and it’s a great day. We passed the Equality Act, today, which means that we will have a law on the books, uh, when it passes the Senate, and President Biden signs it, and he has agreed to that, um, that will prevent discrimination across our great land. So, across anything from, uh, housing to employment, to public spaces, to private spaces, so I'm thrilled today. Um, what put a damper on things, yesterday, was I was simply expressing my support for my daughter and the greater LGBTQ community. And Representative Greene, uh, took another path. Uh, she is in disagreement with me, shall we say, but clearly, clearly, she is angry. Uh, she's angry at everybody and everything. So, uh, her kind of modus operandi at all times is to, in fact, bully people. Well, you can only let bullies go so long and you have to speak out. And so, I was making a statement about seeing the community, seeing LGBTQ folks, embracing them and respecting them. That's all that was meant. I'm not surprised at her behavior. I am surprised she is a congressperson.

CUOMO: What do you say to the members of her party who are silent in the face of her words and deeds?

NEWMAN: Yeah, you know, here's the good news. Is that several members of the Republican Party, uh, did reach out to me privately and expressed they were horrified by her behavior, and they were horrified by her general, uh, being in Congress [LAUGHS], to be honest with you. Um, a few actually spoke out publicly, Adam, um, Kinzinger is among them, and I really appreciated those comments. Um, that said, I think that, uh, they are in fear of the QAnon kooks, um, because they do spread lies. And they can turn on their own; they have demonstrated that. So it is unfortunate that more didn't reach out, but some did, and I want them to have credit and want them to know I deeply appreciate them reaching out.

CUOMO: They reached out to you directly?

CUOMO: Kinzinger, I think put out something public. Um, here’s my beef. I understand human to human it's nice for people to give consolation on something as intimate and personal as your kids. But that's not their job—is to just talk to you personally. They've got to stand and be counted because that party is literally running in the wrong direction of what its own values are supposed to stand for. What affect do you think it has on safety of people in the LGBTQ and broader community when a voice and actions, like the QAnon lady’s, are allowed to go unchecked?

NEWMAN: We're supposed to be role models in Congress, um, not just by our character but our deeds, our actions, and what we say. So, it's very important about what we say, words matter, but actions really matter, Chris. And that's why I actually chose to act, today. I will also say, too, that we have to be representing the American people all day long and their values. What they want right now is COVID relief. They want us to get this COVID relief package out. But the good news is Congress can walk and chew gum at the same time. We passed the Equality Act, today. We're going to pass the American Rescue Plan and get payments directly to Americans. We're going to fund and support cities, counties and towns and get this vaccination, uh, rolled out to everyone, um, over time. And so, I'm immensely proud of the Democratic Party, right now. I do think that there are folks inside the Republican Party who are demonstrating some level of courage. I'm encouraging more of them to come out. There are more people supporting you than you could possibly know. And my message to them is is that we need two strong parties in order to have checks and balances, and I encourage that. So whoever can take on that mantle to bring the Republican Party back to what it is, so that we can have a partner in governing, that would be great and very helpful. We must get relief. We must get a transportation and infrastructure bill out. We must build back America. We must get a green stimulus package out. So, uh, I'm looking forward to some folks getting some courage.

CUOMO: Boy, I’ll tell ya, you know, that is the kind of discussion we should be having about people who are in the LGBTQ-minority community. Uh, that, listen, you can come out; we accept it; you’re embraced. They may have to add to an R, uh, to that if Republicans keep going the way they're going because they're becoming a frightened minority in their own party that are going to need protection from their own. And I just want people to understand something. 90% of trans people report experiencing harassment, mistreatment or discrimination. It is rampant. 53% of transgender people report being harassed or disrespected in a place of public accommodation like a bathroom, especially because of the weaponization of that issue. Look, we all know that tolerance and integration of different types of people will require finesse. You have to figure it out. You've got to figure out the sports thing. You've got to figure things out. But we've got to embrace it. And I'm really sorry that you had to deal with this in a place that's supposed to be about making us better. Congresswoman Marie Newman, um, the best to your daughter and you’re here to have a platform to discuss the way forward—and I think it’s going to happen soon because I don’t know how this gets through the Senate. So, I'm here to discuss, when you want.

NEWMAN: Well, thank you so much and thank you for having me this evening.

CUOMO: Thank you for making the time.