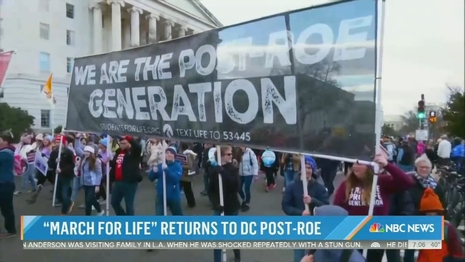 On Friday, NewsBusters looked at the past decade of broadcast network coverage of the March for Life and found 25 minutes and 50 seconds from 2013 to 2022 (with over half coming from 2017). For 2023, the total clocked out at six minutes and 52 seconds on their flagship Friday night and Saturday morning news programs, but it all came from CBS and NBC. ABC’s World News Tonight and Good Morning America wanted nothing to do with the event that drew tens of thousands to Washington D.C. in support of the unborn.

ABC’s mind was elsewhere, with 100 seconds on World News Tonight about more charges relating to January 6 while Good Morning America had two minutes and 36 seconds on a lawsuit related to a Vincent van Gogh painting, and then a combined seven minutes and 24 seconds on skincare and tax filing tips found on the communist China-owned TikTok.

As for CBS and NBC, things weren’t promising on Friday night. CBS Evening News anchor Norah O’Donnell teased coverage of “marches across America” on abortion, but eventually spent 42 seconds on the march, which coincides with the anniversary of Roe v. Wade.

“This Sunday marks 50 years since the landmark Roe v. Wade Supreme Court ruling that established the legal right to abortion. Here in Washington today, thousands of abortion-rights opponents took part in the annual March for Life rally. That’s actually the first since Roe was overturned last year. Organizers say more work needs to be done on the state and local level to protect the unborn,” O’Donnell said.

She then added Biden’s reaction to the first anniversary of Roe since its overturning in June and touted a CBS News poll claiming “more than six in 10 Americans want abortion in their state to be legal in all or most cases.”

Thompson made sure to paint the pro-lifer in Andrew Shirvell of Florida Voice for the Unborn in a bad light by contrasting his hope “for a complete abortion" with the idea that there will be “dire consequences,” as an abortionist told her “women will die because of what has happened.”

On Saturday, CBS Saturday Morning gave the March for Life its due with three minutes and 21 seconds.

“The March for Life takes on a new purpose. On Friday, the annual gathering of thousands of anti-abortion rights activists was held for the first time since the Supreme Court overturned Roe v. Wade,” began co-host Dana Jacobson.

Chief election and campaign correspondent Robert Costa reported from the march and, sure enough, made a brief return to his past as a conservative reporter by giving pro-lifers room to speak (click “expand”):

COSTA [TO GRAHAM]: How far should that fight go?

FRANKLIN GRAHAM: It’s a battle that will continue — I think — when I say battle, it’s not a physical battle but, I mean, a spiritual battle for the soul of this nation.

COSTA: Evangelical leader Franklin Graham, son of the famed Billy Graham, was one of thousands of anti-abortion activists who turned up in Washington Friday for the March for Life, arguing that the end of Roe is not the end of their fight. [TO JOHNSON] After the midterms last year, where does the abortion issue go from here?

ABBY JOHNSON: Well, I think the pro-life movement has always been strongest at the grassroots level. So, Roe’s overturned, but we still have a lot of work to do.

COSTA: But the persistence from conservatives on abortion comes as the Republican Party is at a crossroads. Some, like former President Donald Trump, have blamed last year’s disappointing election results on the abortion issue being “poorly handled by many Republicans who...insisted on No Exceptions” on abortion.

COSTA: But in the early days of the 2024 presidential race, some possible Trump rivals are shaking their heads at Trump’s assessment, moving to the right and challenging the competition to take further action.

COSTA: But many attending the march acknowledged the politics of an issue that has long been highly charged remains complicated. [TO MARCH FOR LIFE ATTENDEE] Do you believe Republicans should push more or less on this issue?

NBC’s Saturday Today clocked in at two minutes and 49 seconds, excluding a tease from co-host Kristen Welker speaking of a “battle cry” from “tens of thousands” who took “to the streets...as part of the March for Life rally.”

Correspondent Marissa Parra started off on a solid note, sharing the crowd was “in the tens of thousands” that was in “a big celebratory mood” as the end of Roe was “what they’ve been fighting for.”

Parra was the lone correspondent to share soundbites from the official program, but after a nod to the few counterprotesters, she horribly bungled her facts:

The path to a full nationwide victory for either side an uphill battle. It’s been 50 years since Roe v. Wade was first signed into law, but in the months since its reversal last summer almost two dozen states have either banned abortion or they’re close to it with several legislative sessions actively debating what their laws will be on a state level. This as federal action fails to move forward. Senator Lindsey Graham's federal abortion ban proposal failed last fall and the Biden administration’s hope of a federal right to choose...unlikely in a Republican-controlled House.

First, Roe wasn’t “signed into law.” Supreme Court decisions don’t work that way. And second, Graham’s proposal isn’t an outright “abortion ban,” but rather prohibits abortions after 15 weeks with exceptions. Leave it to liberal journalists to fearmonger and not have the facts on their side.