Back to the Mat for Dems: Nets Leave Biden Docs Behind to Pound GOP Over Debt Limit 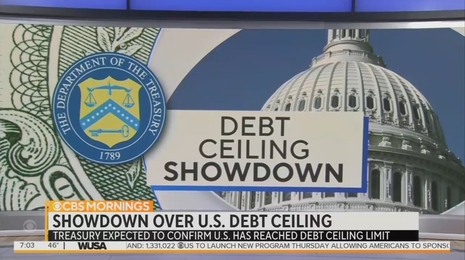 CBS dropped the Biden documents scandal on Wednesday morning and was followed that night by NBC, so it was only a matter of time before ABC did the same. Sure enough, Thursday’s Good Morning America put it out to pasture.

Instead, the three networks resumed spinning for the Biden administration as they slammed House Republicans for refusing to lift the debt ceiling, creating a “dangerous standoff” that could put the country “further into a recession.”

CBS Mornings was the most despondent with seven minutes and 18 seconds of coverage split over two segments (excluding numerous teases). Co-host and Democratic donor Gayle King got it started from the onset of the Eye Opener: “A stark warning from the Fed as the U.S. hits the debt ceiling, how partisan fighting on Capitol Hill could destabilize the economy.”

They later closed the Eye Opener with a supposed quip from CBS’s Late Show as host Stephen Colbert said “all you need to know” about the debt limit fight is “Ahhh! Ahhhhh! Ahhhh!” King agreed: “That sums it up, I think, very nicely”.

Socialist co-host Tony Dokoupil set up congressional correspondent Scott MacFarlane’s report by warning the “showdown...could have a major impact on your money and global markets” because “Democrats are saying that [no raise] risks a government default, which would be a very bad thing, indeed.”

Likely still recovering from his beloved January 6 Committee’s disbandment, MacFarlane concurred that “the dangerous standoff” “could have big consequences on the U.S. economy.”

After using a suburban D.C. hardware store owners as someone who’d be harmed by Republicans, MacFarlane went to Congresswoman Abigail Spanberger (D-VA) as she “says just the possibility of brinksmanship could rattle the markets 401(k)s and trigger a recession.”

“The last time Congress nearly breached the debt ceiling was 2011, and it caused a downgrade of the U.S. credit rating and a shock to the stock market,” he added.

In the second hour, CBS Money Watch’s Jill Schlesinger lamented this used to be “a bipartisan nonevent administrative” and, because it isn’t any longer, there might be “significant consequences” such as job losses, seniors no longer receiving Social Security checks, and unpaid government workers.

SCHLESINGER: What would happen? We could see furloughing of government employees. I am not talking about hundreds of thousands of people. We’re talking about some of those government employees being forced to work, but not getting paid. We’re also talking about things like delaying Social Security checks, maybe you won’t get your tax refund on time. Maybe you won’t go to a National Park. I just want to focus on one thing very particularly, when you don’t have Social Security checks coming in, not only is it putting individuals at risk, it is putting the economy at risk. Those Social Security checks are spent in this economy. We are in an economy right now that is teetering on the edge of recession, so this could cause tremendous tumult and could push us further into a recession than we would have been otherwise.

KING: But when you lay it out like that, Jill, you go, well, why not just raise the debt ceiling?

SCHLESINGER: Yes. Thank you. I exactly agree with that. Because this has become a strange battle in fighting a fight that’s already been fought. And what do I mean by that? When you think about the debt ceiling, this is not running up new debt for something we haven’t voted on. Congress — previous Congresses, Republicans and Democrats have voted on certain spending measures, raising the debt ceiling pays for the measures that have already been voted on...It was already agreed upon, which makes people like me nuts.

Dokoupil asked whether Republicans have a point about spending, but Schlesinger dismissed those concerns by trashing the Trump tax cuts and COVID spending. At one point, she said she doesn’t “care about politics” unless “politicians” are “grandstanding” and “screw[ing] up the economy” that they “impact ordinary American lives.”

NBC’s Today was also not in a good mood. Here was co-host Savannah Guthrie speaking to business reporter Brian Cheung:

GUTHRIE: Stop me if you’ve seen this movie before. Let's go back to basics, the debt ceiling. This is not about new spending. We're not writing a blank check here to do a bunch of new spending. This is about spending that both parties have already done and now it's time to pay the bills?

CHEUNG: Yeah. So important to make the distinction, Savannah.

After the two compared it to someone’s personal credit limit and the “need to increase your credit,” they warned of what will happen this summer when the Treasury’s spending maneuvers are exhausted (click “expand”):

GUTHRIE: I guess, like, chickens come home to roost in June, right?

GUTHRIE: And that's when it's do or die time. You either raise the debt ceiling or what? Catastrophe. Lay it out for us.

CHEUNG: Yeah. Well, I mean, and that's the words we've heard from those inside the Treasury. It would be a full-on catastrophe. But really what we’re talking here is just the consequences of potentially a lot of these social programs going bust because if the — you know, if the government cannot pay its bills on its government debt, which is U.S. Treasuries, well, then, they’re going to have to start make cuts in things like Social Security. They might not be able to make Medicare payments, veterans disability payments, food stamp programs. That would be catastrophic. And it’s also important for financial markets as well. The U.S. government debt is widely regarded as the safest, most — you know, best thing to have in your — in your wallet-type of thing. But if it all evaporates, that’s going to really lead to a lot of catastrophe. But it’s important to note. It hasn't happened. Since 1960 there have been 78 times the government has moved to raise the debt ceiling. Congress — we hope will do the same in this case as well.

GUTHRIE: Is there any cost to the economy and to the American consumer —

GUTHRIE: — when you just have the threat of the debt limit not being raised looming over us for a few months?

CHEUNG: Yeah, well, certainly, the stock market looks at the elements in Washington, D.C., to see whether or not this is going to get done or not. Again, it’s mostly the case that it gets done. But 401(k)s are very much hinging on what's going to happen over the next few months.

As for Good Morning America, the ABC show only had 41 seconds on the hubbub. Senior congressional correspondent Rachel Scott said the battle was “intensifying” and, if Congress doesn’t raise the debt ceiling, “millions of jobs” would be put “on the line.”

Thursday’s campaign against Republicans was made possible thanks to advertisers such as Chewy (on NBC), Princess Cruises (on CBS), and Target (on ABC). Follow the links to see their contact information at the MRC’s Conservatives Fight Back page.

To see the relevant transcripts from January 19, click here (for ABC), here (for CBS), and here (for NBC).