USA Today: There Is ‘No Simple Answer’ for Defining What Is a Woman 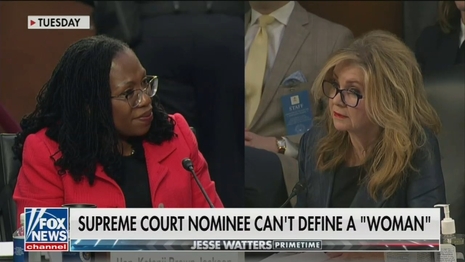 As part of the left’s relentless and stomach-churning attempt to redefine gender and sex, USA Today reacted in a piece Thursday to Republican Tennessee Senator Marsha Blackburn asking Supreme Court nominee Judge Ketanji Brown Jackson to define “what is a woman” by insisting “science says there’s no simple answer” or “sufficient way” to identify whether someone’s a woman.

In other words, forget one’s genitalia and genetics as anyone can be a woman. And, as the piece argued, you’re not only sexist to question it, but it’s the latest incarnation of insulting women dating back to slavery.

Reporter Alia E. Dastagir found it worthy of going down this road in an article from the paper’s “Health & Wellness” section with this headline: “Marsha Blackburn asked Ketanji Brown Jackson to define ‘woman.’ Science says there’s no simple answer.”

Over the course of almost 1,200 words, Dastagir’s impious take served as a reminder that, for all the left waxes poetic about facts, science, and the truth, the only acceptable versions are whatever self-worshipping visions the mob conjures up, even if it disregards basic anatomy you learn in middle school.

Dastagir weighed in even before the actual article, writing in the “Key Points” section that “[t]here is no sufficient way to clearly define what makes someone a woman.”

As for the article itself, she started with a recap of what Blackburn and Jackson both said, including how the question came amid transgenderism being a flash point in American politics and sports, including the Lia Thomas saga.

Shortly thereafter, things few off the rails as Dastagir consulted academics (including “philosophers”) and came away with the notion that even “a competent biologist” can’t “offer a definitive answer” or a woman because “there is no sufficient way” since “there is much variation.”

In the next section, it got even worse with Dastagir arguing it’s incorrect to adopt “a simple binary” for determining male versus female based oh their extremities because “the reality, gender experts say, is more complex.”

After the Barnard professor claimed there’s no “single ‘biological’ answer,” the USA Today hack explained there’s “six different biological markers” in the body that “don’t” all have to “align” (click “expand”):

"There isn't one single 'biological' answer to the definition of a woman. There's not even a singular biological answer to the question of 'what is a female,'" Jordan-Young said.

There are at least six different biological markers of “sex” in the body: genitals, chromosomes, gonads, internal reproductive structures, hormone ratios and secondary sex characteristics. None of the six is strictly dichotomous, Jordan-Young said, and the different markers don’t always align.

Sarah Richardson, a Harvard scholar, historian and philosopher of biology who focuses on the sciences of sex and gender and their policy dimensions, said Jackson's answer accurately reflects legal practice. While U.S. law remains an unsettled arena for the conceptualization and definition of sex, it frequently grounds sex categorization in biological evidence and reasoning.

But like Jordan-Young, Richardson emphasized that biology does not offer a simple or singular answer to the question of what defines a woman.

Dastagir took things in a racial direction, insinuating those questioning someone’s womanhood (i.e. saying Lia Thomas isn’t a woman) were akin to those who supported slavery and thus viewed African-American woman not as women but as property.

Of course, the late Phyllis Schlafly also had to mess up their funhouse (click “expand”):

The category of woman has long been politically contested. Black women, she said, were not always welcomed in the category. For example, while the 19th Amendment granted women the right to vote, for decades many Black women were excluded from exercising it. During Jim Crow, there would be bathrooms labeled "men," "women" and "colored." The longstanding view of white supremacy denied recognition as women to Black women and women of color.

Williams said one can also look to the era of Phyllis Schlafly, an attorney and activist and the face of conservative women in the 1970s who argued against the Equal Rights Amendment, which would make discrimination on the basis of sex unconstitutional. Williams said Schlafly believed women's roles as homemakers were fundamental to how the category of woman was defined.

"There was an effort to define womanhood in very specific ways around roles of mothering and nurture, and to suggest that a society in which women's rights and opportunities were equal to men would essentially lead to a genderless, gender-neutral society," she said. "In other words, if women ceased acting like women, they would cease being women."

The quest for having a world eclipsing Sodom and Gomorrah wouldn’t have been complete without a section defending Thomas, so Dastagir griped: “Gender scholars and trans activists argue that critics are focused on Thomas' assignment as male at birth as the sole reason for her excellence.”

Zooming out to cap things off, Dastagir reiterated her twisted thesis that “no one can legislate science” even though, as she herself and her so-called experts insisted, the science doesn’t actually solve this (wholly unnecessary) back-and-forth on gender.