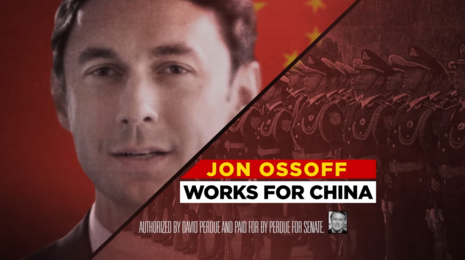 With the Georgia Senate run-offs about two weeks away, the liberal media have continued to put their thumbs on the scale of the electorate in much the same fashion they did by hiding from voters negative stories about the Biden ticket.

In Georgia, one example has been the refusal of the networks and newspapers to cover Democrat Jon Ossoff’s cozy business dealings with the Chinese Communist Party as Peach State voters head to the polls on January 5 to decide the Senate’s balance of power.

NewsBusters conducted a Nexis search of the broadcast networks transcripts over the past three months and they have yet to acknowledge, on their morning or evening newscasts, that Ossoff’s media company received money from PCCW Media Limited, which is partially owned by a Chinese state-backed company. According to Nexis, this blackout also extended to The New York Times.

Seeing as how we’re still in the throes of the liberal media largely ignoring Eric Swalwell’s romance with a Chinese spy, this shouldn’t come as too much of a shock.

Georgia Democrat and Senate candidate Jon Ossoff has been compensated by a Hong Kong media conglomerate whose owner has spoken out against pro-democracy protests in Hong Kong, according to his most recent financial disclosure.

Ossoff, whose role as CEO of a London-based producer of investigative documentaries has drawn scrutiny over the years, reported in an amended financial statement that he has received at least $5,000 from PCCW Media Limited over the last two years — a detail that has previously gone unreported. Ossoff did not disclose his ties to PCCW in his initial financial report, which he filed in May.

PCCW, the largest telecom agency in Hong Kong, is run by Chairman Richard Li, son of Hong Kong’s richest man, Li Ka-shing. Li also serves as a councilor for the Center for Strategic and International Studies, a Washington, D.C., think tank. But for years, Li has spoken out against Hong Kong independence and the pro-democracy protests that have rocked the island as the Chinese Communist Party has consolidated control.

Fast-forward to December 10 and Hoonhout had an update where, to put it simply, things weren’t looking any better for Ossoff (click “expand”):

Jon Ossoff’s campaign has changed its tune on payments the Democrat received from a Chinese Communist Party-linked media conglomerate in Hong Kong, after Georgia Republicans filed an ethics complaint alleging he “knowingly and willfully” failed to disclose the payments in a May financial disclosure.

National Review first reported in September that Ossoff’s campaign had amended a financial disclosure form in July to reflect that he had received payment from the Chinese media firm after leaving that detail out on his initial disclosure form. Senate ethics rules only require candidates to disclose payments in excess of $5,000, and the campaign subsequently told FactCheck.org that the initial failure to disclose was the result of a “paperwork error.”

But Georgia GOP’s executive director Stewart Bragg told the Atlanta Journal Consitution on Wednesday that Ossoff “tried to hide his connection” to PCCW, 18 percent of which is owned by China’s state-backed enterprise China Unicom, and whose main owner has opposed the pro-democracy protests in Hong Kong.

Now the campaign claims that the payments were in fact less that the $5,000 disclosure threshold mandated by ethics rules, and amounted to “around $1,000,” meaning they would have been in the clear had they never amended the disclosure form.

“Though the payments were below the $5,000 reporting threshold, the campaign said the sums were disclosed in the interest of transparency,” the AJC reported.

Add in Breitbart’s reporting, and we have a situation that’s eerily similar to the Hunter and Joe Biden treatment. Since September, the liberal media have decided to quarantine and avoid having the courage to behave like the intrepid reporters so many of them claim to be.

And when they do cover it (like Georgia’s Atlanta Journal Constitution, CNN.com, or The Washington Post to name a few), it’s without any adversarial attitude but rather one compelled to help a friend out by dismissing/downplaying what’s clearly a massive scandal.

So, in the Christmas spirit of caring and sharing, let’s run through a few questions the liberal media should ask the Ossoff campaign and write a story about.

First, Ossoff should have to repeatedly answer (and on his own) for whether or not there are countries other than China and Qatar that his media company did business with. Spokespersons emailing statements won’t cut it here.

And second, Ossoff should explain the campaign’s change in tune from not reporting the $5,000-plus PCCW payment to it being an “oversight” to defending the omission because the real sum was less than the Senate-required $5,000.

If China doesn’t pique your interest, the Washington Free Beacon reported back in July that Ossoff’s media group “received at least $5,000 from the Qatari-backed Al Jazeera network over the past two years.”

Between media cover-ups on Ossoff’s ties to China and Qatar, Swalwell’s relationship with a Chinese spy, and any substantive coverage of Hunter Biden’s own Chinese business dealings, the liberal media have an issue with standing up to China. As Tucker Carlson recently noted, perhaps it’s because the liberal media are dependent on Chinese dollars for their survival.

So much for ethics and democracy dying in darkness.