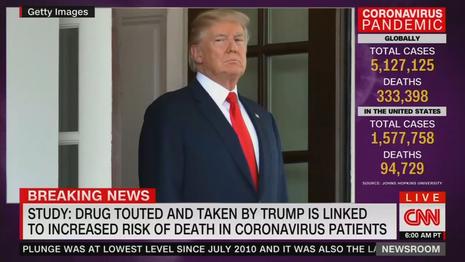 When Jeffrey Zucker’s CNN settles on a narrative, they flood the zone with employees singing from the same sheet music; seeing as how they have a President to hate.

Such was the case on May 22 when CNN shows spent 90 minutes and 54 seconds heralding a now-debunked study that originally claimed taking hydroxychloroquine while battling COVID-19 could be fatal. Over on MSNBC, the total clocked out at a smaller but still sizable total of 19 minutes and 19 seconds.

For this count, the MRC looked at every hour of live programming from CNN and MSNBC May 22, and, in the case of CNN shows and MSNBC primetime, backed up by Nexis transcripts. Since the study went live just before 9:00 a.m. Eastern, each of the 10 subsequent CNN shows covered the study. On MSNBC, nine shows featured it.

How about coverage of the retraction? As of this study’s publication, MSNBC has ignored it while CNN has only given it one minute and 45 seconds during The Lead with Jake Tapper. So much for Jim Acosta’s claim last week that journalists correct their mistakes.

As we found out on Thursday, the study from The Lancet was retracted due to a myriad of problems, ranging from skepticism of its accuracy to bizarre ethical issues about one of the companies involved. Questions had been raised for weeks, but it was only on Thursday that it was formally retracted.

The Hill had more details on the retraction (click “expand”):

A major study on the effects of hydroxychloroquine on COVID-19 patients was retracted from a leading medical journal Thursday after doctors and scientists raised questions about the validity of the data.

The three authors of the study, led by Mandeep R. Mehra of Harvard Medical School and published in late May, retracted their study from the Lancet because independent peer reviewers could not access the data used for the analysis.

The source of the data was Surgisphere Corporation, which told peer reviewers it would not transfer the full dataset used for the study because it would violate client agreements and confidentiality requirements.

“We all entered this collaboration to contribute in good faith and at a time of great need during the COVID-19 pandemic,” the authors wrote in a statement Thursday. “We deeply apologize to you, the editors, and the journal readership for any embarrassment or inconvenience that this may have caused.”

The Lancet wrote in a statement that it “takes issues of scientific integrity extremely seriously” and that there are “many outstanding questions about Surgisphere and the data that were allegedly included in this study.”

That’s right. The study wasn’t fully peer-reviewed, a hallmark for ensuring that studies hold weight and actually found what they stated. In other words, fact-checking.

And according to a June 3 investigation from The Guardian, Surgisphere had some questionable hires for a healthcare company that included a “science fiction writer and an adult-content model.”

But over in Zuckerville, there weren’t any questions about accuracy (and, to a lesser extent, on MSNBC).

Inside Politics host John King huffed at noon Eastern that it was “another violent collision between what the President thinks and says, and the more disciplined world of science and data.” 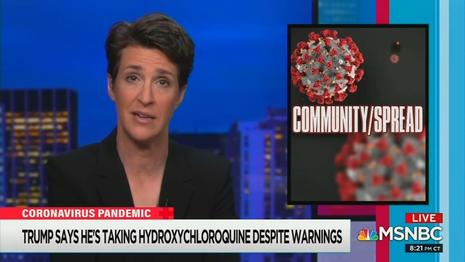 And some bad news about the drug that he has repeatedly touting -- has touted and is currently taking. A large new study links hydroxychloroquine and chloroquine to a higher risk of death in coronavirus patients. Researchers looked at seriously ill, infected patients in more than 600 hospitals worldwide. And those treated with either medication were more likely to die or develop a heart condition. Now, keep in mind, this is the drug that the president has called a game changer.

Over on MSNBC, Rachel Maddow fretted that the study signaled Trump’s promotion of hydroxychloroquine had “moved on from absurd and sort of insane to a potentially deadly threat.”

“Those who were given the drug the president has been huckstering for suffered a significantly higher risk of death compared with patients who did not take that drug,” she added.

JOE SCARBOROUGH: Breaking news from The Washington Post, just a side note here. A study was just published in the medical journal The Lancet and it is the largest analysis of date of the risks and benefits of treating COVID-19 patients with hydroxychloroquine. The study of 96,000 hospitalized coronavirus patients on six continents found that those who received that drug promoted by Donald Trump as a “game changer” in the fight against the virus had a significantly higher risk of death.

SCARBOROUGH: — compared to those who did not. The quote: “It’s one thing not to have a benefit, but this shows distinct harm,” said a cardiologist —

SCARBOROUGH: — and director of the Scripps Research Translational Institute.” If there were ever hope for this drug, this is the death of it. Breaking news from The Washington Post —

SCARBOROUGH: — about a study just published today in The Lancet —

BRZEZINSKI: Well, and you know —

BRZEZINSKI: — the President called that VA study that came out recently about hydroxychloroquine, you know, false. I wonder if he will call this false as well. I — I hope the American people don't listen to him on this. Another crazy rabbit trail that he's taking Americans down. Susan del Percio —

SCARBOROUGH: Not just dangerous, as the study this morning shows — or crazy. It’s a dangerous rabbit trail.

SCARBOROUGH: — do no harm. It is significantly more dangerous to take this drug with coronavirus.

BRZEZINSKI: And the question is, is the President really taking it? He is taking this dangerous drug?

Another melodramatic Morning Joe conversation that now, in retrospect, was false. There are few guarantees in life. One of them? It’s flip-floppers and lovers Joe and Mika getting things wrong.