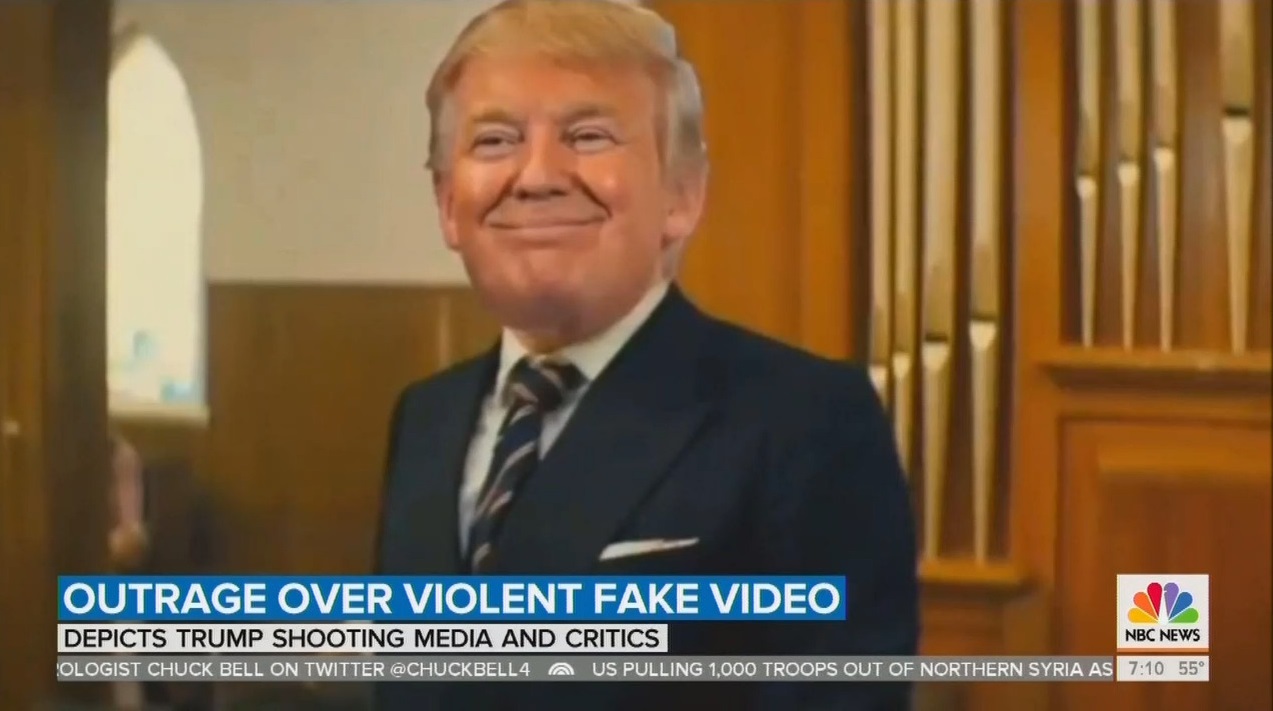 The New York Times reported late Sunday night on “a video depicting a macabre scene of a fake President Trump shooting, stabbing and brutally assaulting members of the news media and his political opponents” aired at a Doral, Florida conference hosted by the pro-Trump group American Priority over the weekend.

Pulled from a scene in the movie Kingsman: The Secret Service, the video has been thoroughly condemned by conservatives, journalists, liberals (but I repeat myself), White House Press Secretary Stephanie Grisham, and even the NewsBusters Twitter account. At best, it was lame.

But like most hubbubs, the liberal media turn up the outrage meter to a 15 out of 10, warranting a closer examination.

KARL: The WHCA is horrified by a video reportedly shown over the weekend at a political conference organized by the President’s supporters at the Trump National Doral in Miami. All Americans should condemn this depiction of violence directed toward journalists and the President’s political opponents. We have previously told the President his rhetoric could incite violence. Now we call on him and everybody associated with this conference to denounce this video and affirm that violence has no place in our society.

CNN P.R.: Sadly, this is not the first time that supporters of the President have prompted violence against the media in a video they apparently find entertaining - but is by far and away the worst. The images depicted are vile and horrific. The President and his family, the White House, and the Trump campaign need to denounce it immediately in the strongest possible terms. Anything less equates to a tacit endorsement of violence and should not be tolerated by anyone.

Put another way, CNN pulled a Beto O’Rourke, demanding anyone who doesn’t offer a sufficient denunciation of the video be deemed supportive of violence against reporters. How unifiying!

But when it comes to threats of assassination and violence against the President, the broadcast networks resort to spin, which was the argument that both sides are wrought with issues.

In June 2017, Shakespeare in the Park performed a rendition of Julius Caesar in which Caesar bore a close semblance to Trump and, as the story goes, Caesar was stabbed to death. But when it came to the broadcast network flagship morning and evening newscasts, both shows on ABC (Good Morning America and World News Tonight) and NBC (Today and NBC Nightly News) ignored it.

ABC’s Nightline covered it on July 13, 2017, but correspondent David Wright lamented that a play depicting Trump’s murder was “targeted by Trump loyalists eager to make a scene.” 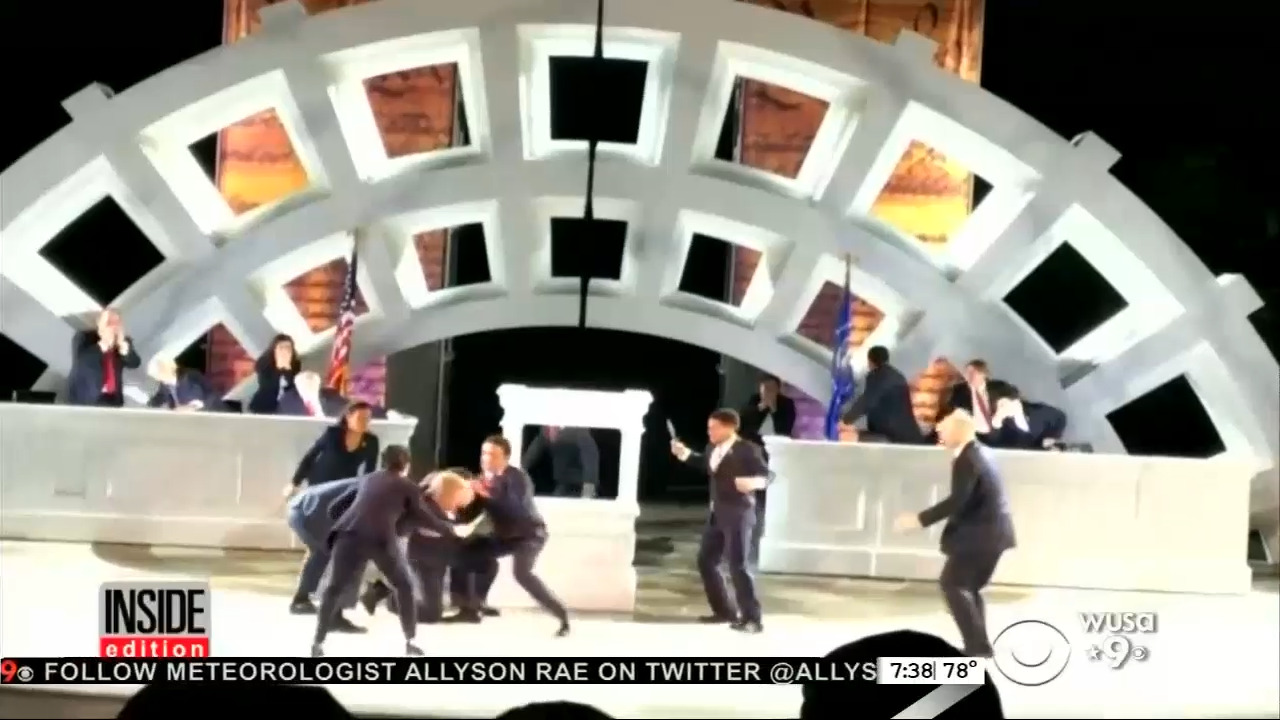 Between CBS This Morning and CBS Evening News, the network covered the Caesar matter six times, but some downplayed and even excused it as part of our political climate in which all sides bear responsibility. So for some at CBS, pretending to murder the President is a both sides issue.

NBC Nightly News was the lone network newscast to ignore the June 2017 story of Johnny Depp joking about someone assassinating the President. CBS’s Gayle King and Norah O’Donnell plus ABC’s Paula Faris flatly decried Depp, but others hurled similar excuses.

Going back further, CNN boasted in October 2006 of a Canadian film Death of a President based on an alternate reality in which George W. Bush was assassinated. Other cases involved Snoop Dogg and, more recently, a New York Times column wistfully thinking about a dead Trump.

These wrongs don’t make a right, but it’s instructional as to what the priorities are for the living, breathing fainting couches in the liberal press. Perhaps the liberal media should be looking to clean up its own act first, whether it be airing a fake news reel or deeming Ronan Farrow’s book a “conspiracy theory.”

To see the transcript select quotes from the Caesar and Depp controversies, click “expand.”

JAMIE WAX: The theater company is standing by its interpretation of the play and its artistic director says that the production in no way advocates violence towards anyone. or more than four hundred years William Shakespeare’s Julius Caesar has been a lightning rod. This year’s adaptation by a New York City theater company is no different. It features a President Trump look-alike who is stabbed to death on a stage, a modern take on Shakespeare’s classic play.

HOLLYWOOD REPORTER’s MATTHEW BELLONI: The danger here is that once you start pulling funding or giving funding based on the content of a particular piece of art, you’re getting into a value judgment.

BELLONI: If a play like Julius Caesar can, essentially, be punished for what some have said is an offensive production what else could happen here?

WAX: Interestingly, in 2012 Delta Air Lines gave financial backing to a production in Minneapolis of Julius Caesar, which seemed to reference then President Obama. But that production didn’t get anything near this type of attention. What’s remarkable about Julius Caesar is that it always seems to echo the political environment in which it’s produced. Gayle.

SCOTT PELLEY: We don’t know about the gunman’s mental health, but it appears that his fury may have been fanned by what has become the incendiary rhetoric of American politics.

ANTHONY MASON: The play has been criticized for making close associations between the Roman dictator and President Trump. The performance continued after the interruption.

DAVID MUIR: Next tonight here, the famous actor igniting a firestorm over what he said about President Trump. He's already apologizing.

MATT GUTMAN: In a statement tonight, he admits it wasn't funny. "I apologize for the bad joke I attempted last night in poor taste about President Trump." This comes just a week after that shooting at a Virginia baseball field. Representative Steve Scalise nearly killed, prompting calls from politicians on both sides of the aisle for more civility. Calls apparently ignored by a Nebraska Democratic state party official Phil Montag, caught on tape as saying this about Scalise. 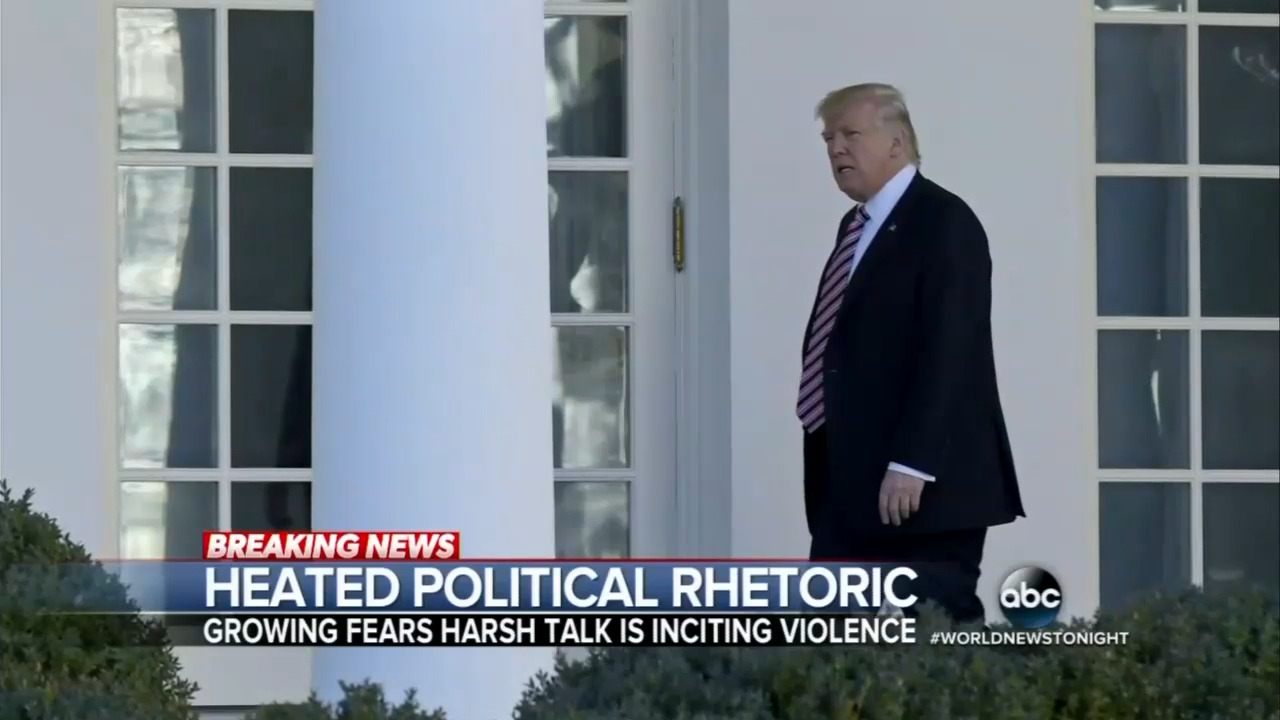 GUTMAN: Montag claims he was taken out of context, but was fired anyway by the state's party chair. The White House facing its own criticism today after the President welcomed a former Trump delegate who last year suggested that Hillary Clinton be executed.

STATE REPRESENTATIVE AL BALDASARO (R-NH): Hillary Clinton should be put on the firing line and shot.

GUTMAN: The White House, tonight, David, is condemning both Depp's comments and all calls to violence. And law enforcement officials we spoke with said their concern is that even a joke by an actor here in Hollywood could be taken seriously and trigger violence

DANA JACOBSON: But we begin this half hour with another celebrity in hot water over their politics. Pirates of the Caribbean star Johnny Depp apologized on Friday for joking about assassinating President Trump. Depp made the remark at an arts festival in Britain.

ANTHONY MASON: His comments are part of a wave of violent rhetoric that’s rolling through U.S. politics.

VILLARREAL: Since taking office, the President who in the past has used violent words at campaign rallies has been the target of celebrities. Madonna mused about blowing up the White House just a day after the inauguration. More recently Kathy Griffin was fired by CNN after posting a grisly photo of the President and an adaptation of Julius Caesar has been protested for starring a Trump-like figure. White House spokesman Sean Spicer told reporters the lack of outrage from some of the instances is a little troubling. Johnny Depp released a statement to People Magazine saying in part, “I apologize for the bad joke I attempted. I intended no malice. I was only trying to amuse, not harm anyone.”

MORGAN RADFORD: In fact, Johnny Depp, he’s been laying low, staying out of sight this morning, after joining a growing list of stars, coming under fire for seeming to suggest violence against the President. But some say this really isn’t the first time threats have been made under the guise of humor. Even, they claim, coming from the commander-in-chief himself. Actor Johnny Depp apologizing Friday after appearing to joke about killing President Trump, while speaking at a music festival in England.

RADFORD: Trump critics, however, point to a time during the campaign when the President made what some called a veiled threat against Hillary Clinton.

RADFORD: And on Friday, a New Hampshire state representative named Al Baldasaro attended a bill signing with the President. This after the Secret Service investigated him for threatening Hillary Clinton last summer.

AL BALDASARO: Hillary Clinton should be put in the firing line and shot for treason.

RADFORD: In this divided political world, one thing most people can agree on--talking about violence is no laughing matter. Well, the White House did issue a statement saying, quote, “President Trump has condemned violence in all its forms and it’s sad that others like Johnny Depp have not followed his lead.” Meanwhile, the Secret Service says it is aware of Depp’s comments.