Imagine If It was Obama: Nets Yawn as Violent Snoop Dogg Stands Over Trump’s 'Corpse'

All three networks on Wednesday and Thursday ignored rapper Snoop Dogg’s latest assault on Donald Trump, this time imagining the rapper standing next to the corpse of the President. In a posting to Instagram (since deleted), the musician appears in a morgue and looks at a corpse with a toe tag reading “Trump.” The President is draped in an American flag next to this title: “Make America Crip Again.”

Despite 90 minutes of air time for Wednesday’s evening newscasts and eight hours on Thursday’s morning shows, ABC, CBS and NBC skipped the offensive image. Earlier in the year, the rapper released a music video in which he shot a clown-faced Trump in the head. That resulted in a collective yawn from journalists.

FNC's Fox and Friends, however, covered the story on Thursday:

In June, the MRC’s Brent Bozell and Tim Graham wrote about liberal celebrities fantasizing over murdering the President:

The very bizarre rock singer Marilyn Manson also has a music video in which a facsimile of Donald Trump is seen decapitated, blood everywhere, soon after Manson tears a Bible apart. Where was the coverage and condemnation?

Before he was canceled, Nightly Show host Larry Wilmore pledged to suffocate Trump:  “I don’t want to give him any more oxygen. That’s not a euphemism, by the way. I mean it literally. Somebody get me the pillow they used to kill [Antonin] Scalia and I’ll do it — I’ll do it!” He had been  honored by the White House Correspondents Association to perform a "roast" (think toast) of Obama, but where was the coverage and condemnation of this "joke"? 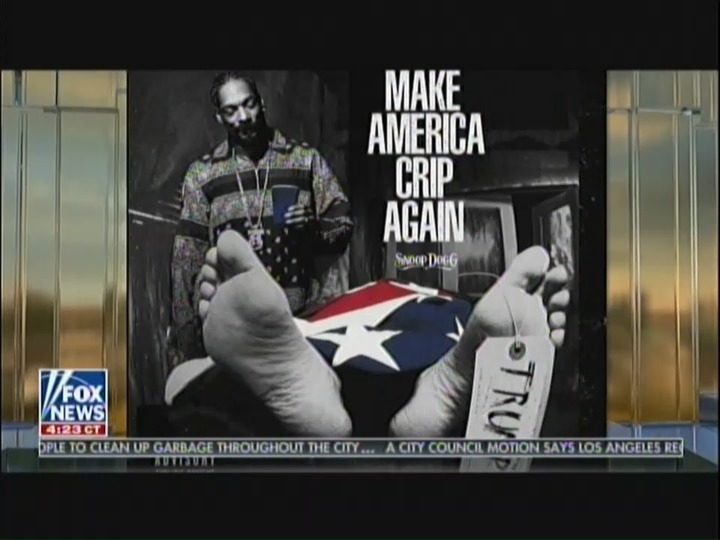 When it comes to Republican presidents and the left, this is not new. In 2006, a faux documentary imagined the assassination of George W. Bush. CNN promoted the film and there was a general lack of outrage.

In contrast, when a Missouri rodeo clown wore an Obama mask, the August 12, 2013 Today show fretted over “rodeo racism” and quoted one spectator as decrying the act as “an effigy at a Klan rally.” The next day, news reader Natalie Morales breathlessly explained, “The rodeo clown who wore a President Obama mask during a performance at the Missouri State Fair has been banned for life.”

Clearly, the action was disrespectful, but is it the same as imagining you are going to murder the president?

For that matter, what about sexually threatening the First Lady? Snoop Dogg’s nephew, rapper Bow Wow, did that back in March. Again, where’s the outrage?