With the liberal media unable to vocalize their spin on camera while Supreme Court nominee Brett Kavanaugh was testifying Thursday afternoon, many took to Twitter to voice their displeasure with the “Angry Kavanaugh,” calling him a “belittled marginalized white man” who, based on his summer of lifting weights, assaulted Dr. Christine Blasey Ford.

Perhaps tops among the news outlets with journalists losing their noodles was The Washington Post where, based on some of their tweets, democracy died in darkness on Thursday...or something.

First up was national reporter Mark Berman, who complained that he’s “stuck on Kavanaugh saying the allegations against him are an ‘orchestrated political hit’ fueled by anger at Trump's election in 2016 and people trying to get revenge for the Clintons” since he had told the Senate at his first set of hearings that judges “stay out of politics.”

Colleague Aaron Blake was on much the same page, blaming Kavanaugh for worsening the country’s polarization: “Kavanaugh’s speech and this whole situation likely just hastened the politicization of the judiciary.”

As for columnist Ruth Marcus, she condemned “Angry Kavanaugh” as “not a good look, doesn’t seem like a very smart approach to me.”

It’s doubtful that it ever occurred to any journalist mentioned in this post that it’s probably infuriating to be accused of sexual assault and when you believe you’re innocent. Just a thought. 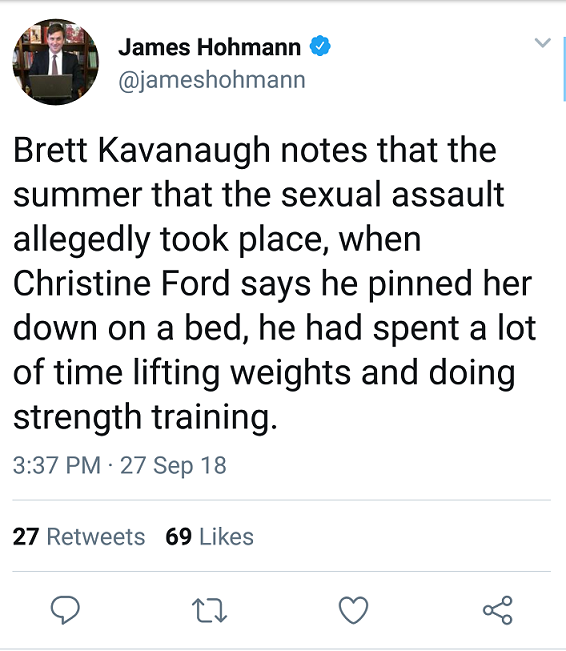 Worst of all, there was fraudulent right-of-center columnist Jennifer Rubin, who offered number of detestable tweets but this was perhaps the worst: 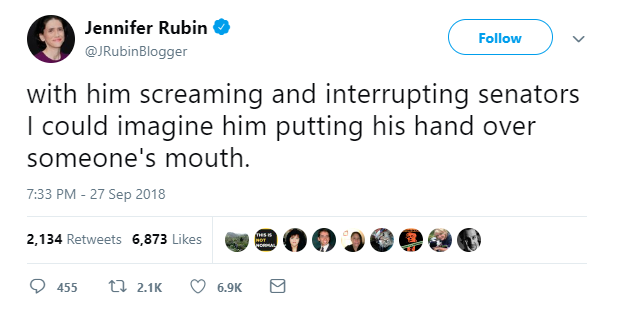 The New Yorker’s Susan Glasser, Bloomberg’s Sahil Kapur, and Slate’s Will Saletan also seemed to be reading from the same cue cards: 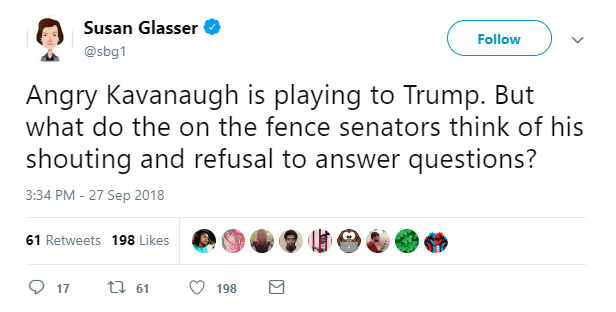 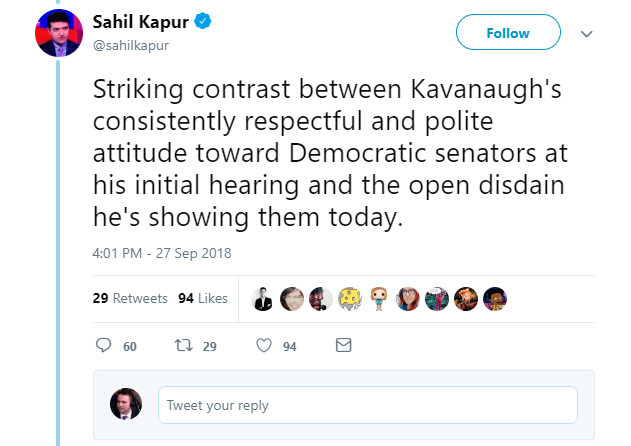 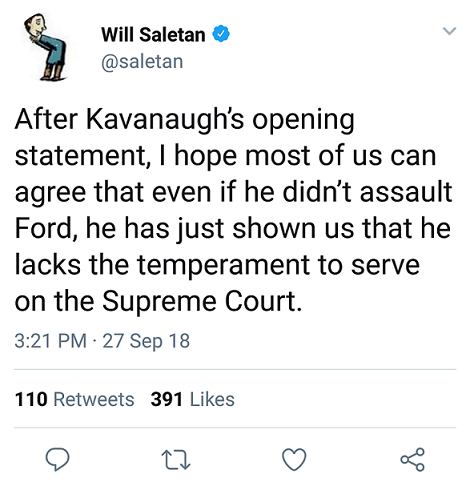 Meanwhile, whoever was running the Associated Press account had a hot take to accompany an article just after the hearing concluded: 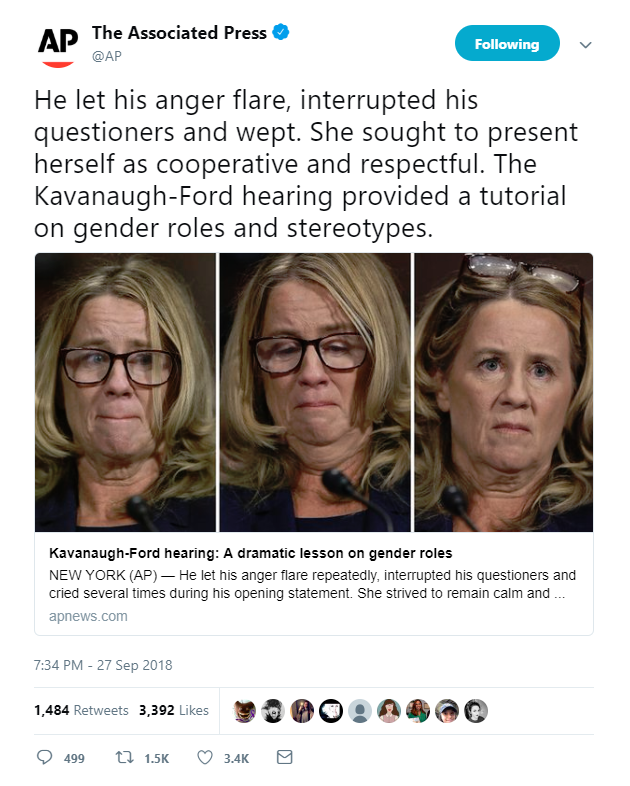 Speaking of attacking one side as sexist, MSNBC’s All In host Chris Hayes claimed that “[t]he GOP men on the committee are just erasing Dr. Ford” as if “she never sat before them today.”

On the other side of the country, San Francisco radio host Ethan Bearman decided to go after Kavanaugh crying at points in his opening statement: “Nice attempt at crying now that his job is on the line. Did you see emotion in his previous hearings? No.”

Doing whatever it is that he’s been doing since he left NBC News, Luke Russert showed that any notion of him being a non-partisan journalist was a farce: 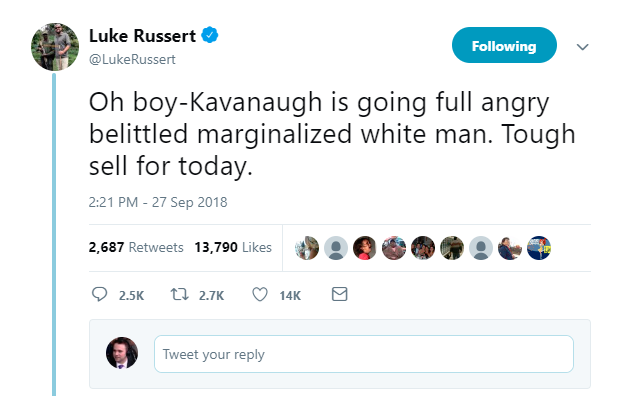 Not sure that you want to be playing that card as a wealthy, white son of The Swamp, my dude. But you do you.

MSNBC host Katy Tur is always one to make statements divorced from reality, so this wasn’t surprising (spoiler alert: Republican Senators didn’t question Ford so thus they didn’t speak to her): 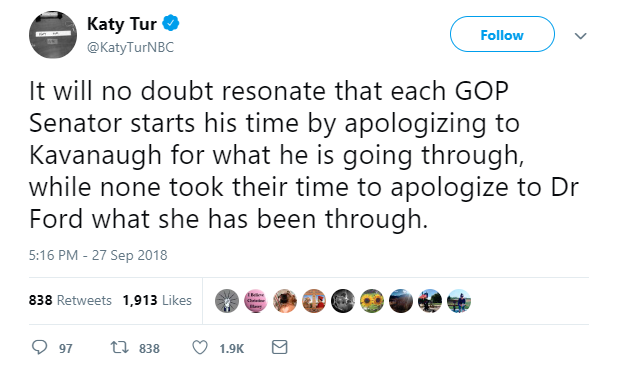 A round-up of liberal journalists going crazy wouldn’t be complete without CNN’s Jim Acosta, so here’s that: 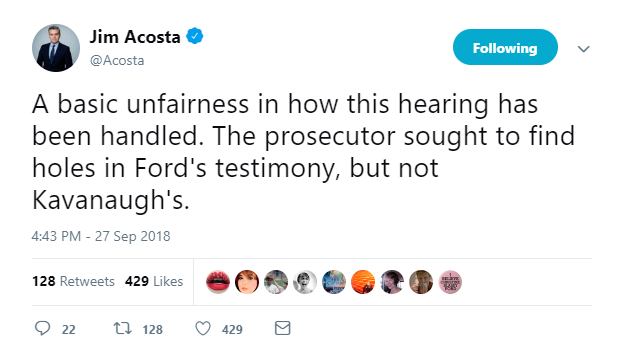 For good measure and someone outside the U.S., self-described “lesbian icon” and Australian podcast host Riley Dennis suggested that Ford was braver than — get this — the Marine Corps: 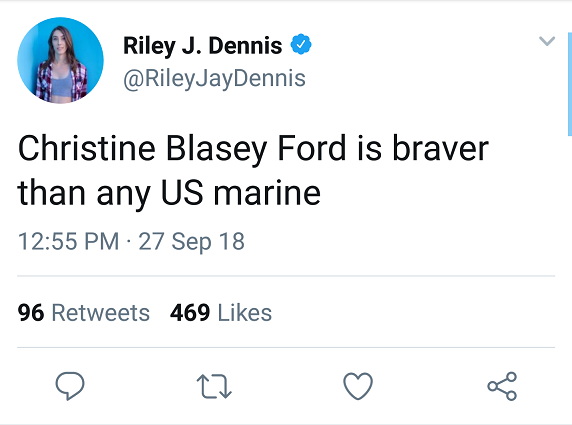