For some reason, CNN decided that it would air the latest installment of its comprehensive and informative miniseries on recent decades in America history with the 2000s despite the fact that many of the same actors, elected officials, journalists, and TV shows remained relevant into this decade.

Instead of waiting — I don’t know — at least five more years or so to give historians and the rest of us time to have the 2000s further in the rear view mirror, CNN went ahead and boy has it been biased.

However, the episode on the George W. Bush presidency from his ill-fated “Mission Accomplished” speech on May 1, 2003 to when he left office on January 20, 2009 was perhaps the worst in showcasing liberal bias by omission and pontificating.

The video above on this slide set the tone for a far-left rehash of recent history that created the culture of demonization against conservatives and Republicans that directly led to the Trump presidency and the public furthering tuning out the liberal media.

NOTE: Some slides have videos accompanying them while others do not! 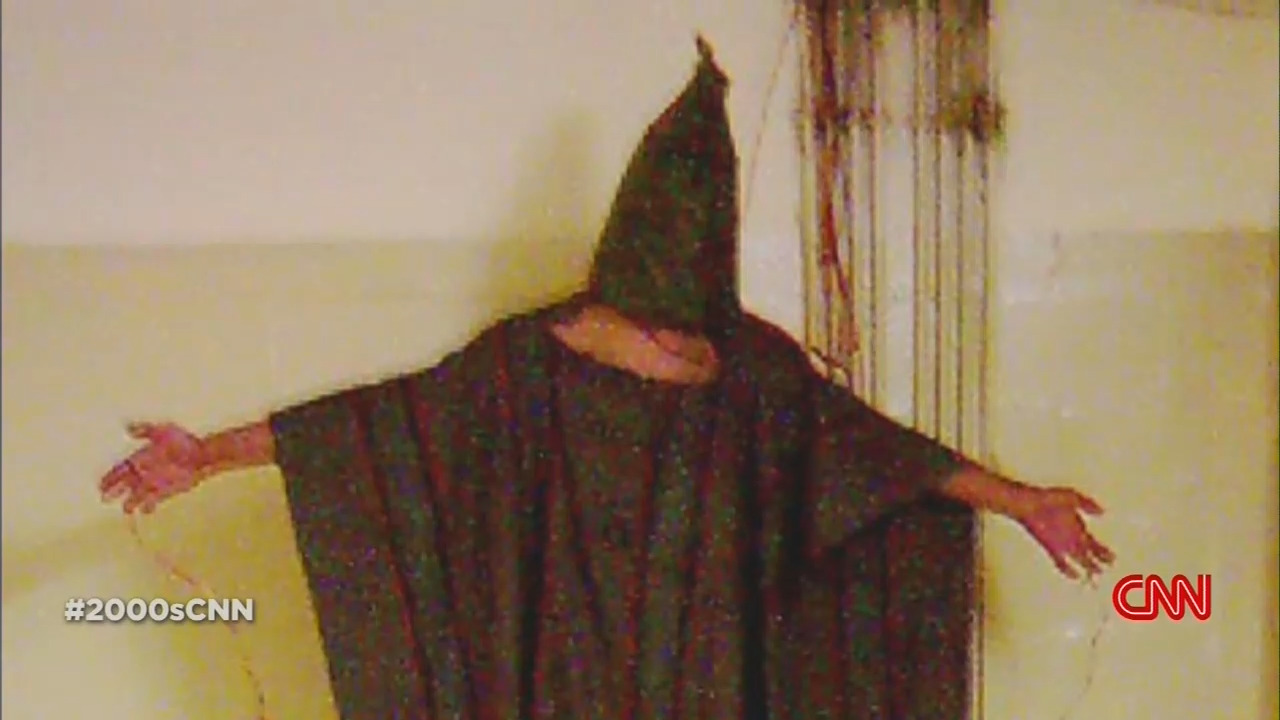 The Iraq War was obviously a featured topic and, to CNN’s credit, there was a balance with a focus on both the pitfalls of the war effort, but also the bravery of U.S. troops and especially during moments like the Battle of Fallujah.

Thanks to a plethora of soundbites from Retired U.S. Army General David Petraeus, it saved this topic from suffering the same fate as other subjects we’ll see later in the slideshow.

However, there were still a few quotes worth highlighting. CNN featured clips casting doubt on the importance of capturing Iraqi President Saddam Hussein, with a take from author Lawrence Wright and news clip from the time by CBS’s Mark Phillips harping on the capturing making matters worse by insulting Arabs.

Former U.S. intelligence official Ali Soufan piled on: “We look at it as triumph, but when they look at it in al-Jazeera, it has a totally different meaning. It's a meaning of humiliation and that definitely heed into the idea of radicalization.”

The myth is that America is the great liberating force and democratic and that our soldiers are more disciplined than anybody else’s soldiers and there's a lot of truth to that myth, but it's partly a myth. Human nature being what it is, there are excesses and there are abuses.

Put simply, the 2004 election recap was emblematic of why the media’s biased and this series was made way too soon. Instead of focusing on how the 2004 election results yielded a mandate for Bush, it offered a wink and nudge to the audience that the Bush campaign stole it from John Kerry thanks to dark money propping up Swift Boats Veterans and scaring voters about gay people.

Among the more noticeable cases of bias by omission were the absences of Kerry’s flip–flopping on support for the Iraq War and Dan Rather concocting and peddling some fake news about Bush’s military service. Yes, really.

Instead of shaming Rather, the makers of the documentary repeatedly touted Rather in old news clips, such as this one seeking to tar and feather the Republican National Convention (which the MRC chronicled here):

Good evening, we’re a block off Broadway and it’s opening night for the first Republican convention ever held in New York City. The choice of this city was no accident. It's much about image. The image of President Bush at Ground Zero as commander-in-chief on a war on terror. That's the picture he wants voters to remember, but that image is competing with this one. The massive weekend protest here against President Bush's policies and the war in Iraq.

Thomas looked back with glee that “Kerry seemed to solve a problem for the Democratic Party” and its image as the “mommy party” seen as being “softer and...weaker and the Democrat had to show they were more war-like.”

“He was able to use his Vietnam service as a weapon really against George W. Bush. He's able to say when the bell rang at Vietnam, I said send me. I want a Silver Star. I won a Bronze Star. I won three purple hearts,” fellow liberal historian Douglas Brinkley swooned.

Working for CBS at the time, Byron Pitts was a chief Kerry suck-up, so it was no surprise that election sounbites featured him fretting about the Swift Boats ad and defending Kerry against a fact-free, partisan attack:

There was a time when John Kerry’s war record seemed untouchable, but in just two weeks, a small veterans group has managed to put the Senator on the defensive....The public face that of Swift Boat Veterans for Truth is that of a salty band of Vietnam vets who served the same time as Kerry, but a closer look shows the group has the support of big money Republicans in Texas with direct ties to the Bush White House and the President’s political adviser Karl Rove.

A soundbite that was not included but flagged down in an August 18, 2004 Media Reality Check was Pitts’s assertion that the Swift Boat Vets “unleashed decades of bitterness” and “[i]f you think this is just a concerned group of veterans, think again.”

Thomas agreed, complaining that they “made it seem like he had exaggerated his exploits” and thus it was “unfair” and “untrue, but it worked and Kerry lost some altitude because of those Swift Boat Veteran attacks.”

It’s interesting that Thomas was even interviewed as he admitted on July 10, 2004 that “[t]he media, I think, wants Kerry to win” while portraying he and running mate John Edwards “as being young and dynamic and optimistic” with “this glow” that will give them a 15-point pump in the polls. Of course, Thomas didn’t mention any of that in 2018.

Along with demonizing the Swift Boat Vets group as a sick, dark money ploy that brainwashed voters, CNN offered another wink, wink that Bush stole the election by fear-mongering voters about gay people.

With the 2004 legalization of same-sex marriage in Massachusetts, the issue emerged on the national scene. Boston Globe columnist Renee Graham remarked that “no one’s really thinking that much about gay marriage, but then it becomes legal in Massachusetts and that's enough to agitate a lot of people” and thus “Republicans see this great opportunity.”

Bush called for a constitution amendment to protect traditional marriage while some states placed referendums about the policy on the ballot.

But because it was a conservative policy proposal, Thomas dismissed it as the Bush team and Karl Rove “exploiting the vulnerability of the American middle classes who were unsure about the world in which they live.”

Republican operatives managed to get referendum about same-sex marriage on the ballot in states that would matter for W. and the goal was to get evangelicals so riled up they would go to vote and while they voted against same-sex marriage, they would vote for President Bush.

Recapping the results, Zelizer cast doubt on the legitimacy of Bush’s win: “Despite all the problems that emerged in 2003 and 2004, still the power of national security is a theme in America after 9/11 and the use of wedge issues all added up to a successful political mix.”

For those not convinced that CNN deployed a hatchet job against Bush, the liberal network’s historical documentary did that and then some when it came to the monumental environmental and human disaster of Hurricane Katrina.

At a most basic level, it failed to place any blame on the top two Louisiana officials in charge during Katrina. Perhaps it was because both New Orleans Mayor Ray Nagin (who’s now in jail) and Governor Kathleen Blanco are Democrats.

CNN immediately nuked its credibility on this part of the episode by using not one, not two, but three soundbites from then-NBC Nightly News anchor Brian Williams reporting on Katrina on an assignment that would, by 2015, prove to have been less-than-accurate.

The bias went beyond old clips to present day reflections with USC professor Todd Boyd stating that “George Bush was made to seem indifferent” while “it looked like a great American city was about to disappear before our eyes.”

“The Bush administration was caught asleep at the switch. Instead of immediately responding, sending in the troops, it took a few days,” complained Thomas.

Without disclosing her as an Obama official, CNN trotted out analyst Juliette Kayyem to oversimplify the national security scene and trash the Bush administration’s response for being solely concerned about terrorism that other objectives were ignored:

Because we concede of the post-9/11 world as a war, America's entire apparatus from intelligence to emergency managers to police was geared towards one goal. Stopping 19 guys from getting on four airplanes again. In that process, FEMA was put within the Department of Homeland Security. It had no funding. It did not have the professional group of people that it once had. It was, in many ways, an orphan of the entire Homeland Security apparatus and it was FEMA that failed so miserably.

After correctly highlighting the Bush flub about then-FEMA administration Michael Brown doing “a heckuva job,” the CNN documentary took aim at Bush as — you guessed it — a racist like Kayne West argued in not caring about African-Americans.

Former MTV News personality and current Rolling Stone writer Jamil Smith argued that “[y]ou can’t disassociate the reality of the visual” when we saw “an American city essentially being left to rot with mostly black people in it.”

The infamous Kayne West line then rolled and historian Yohuru Williams responded along the same lines:

New Orleans native and leftist commentator Cokie Roberts ruled that “I don't think it's true the President was racially motivated, but I do think that he was clueless.”

Going to commercial break, an anti-Bush protest concerning Katrina was given a prime position as protesters shouted, “shame on Bush.” That was setup by Naftali snarking that “[t]his is an administration that prided itself after 9/11 at anticipating problems, and Katrina proved that was all false.”

Earth to Kayyem and Naftali: Do the underwear bomber, Boston bombers, Fort Hood shooter, San Bernardino terrorists ring any bells for you? Oh right. Those happened under the Obama administration while America was not attacked again on Bush’s watch following 9/11.

7. Kick Him While He’s Down: CNN Closes by Lambasting Bush Failures 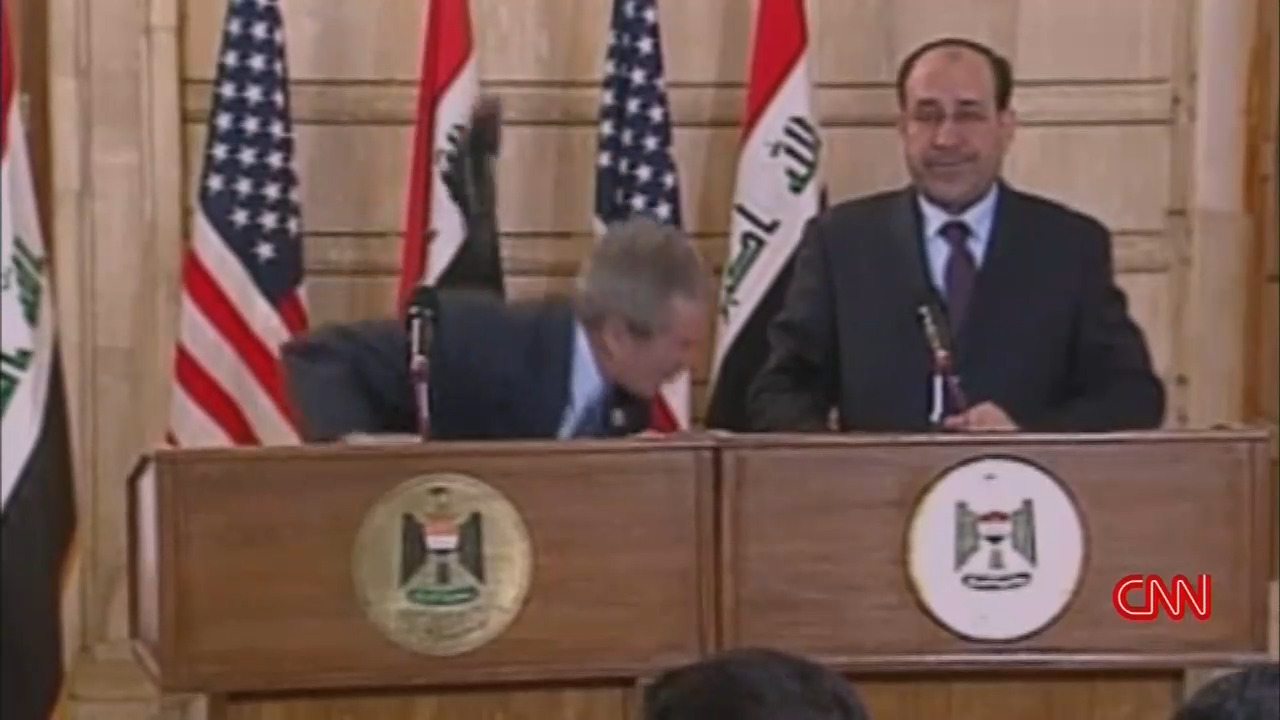 This exhausting hour-long episode of The 2000's still had one final segment left before some reflections on the Bush presidency.

Trips down memory lane included the 2006 midterm elections, the troop surge in Iraq, Bush having shoes thrown at him by an Iraqi journalist, and his approval ratings sinking into the twenties.

“The combination of the long-range disaster that was the Iraq war, with the manifesting competence that was Katrina, with the huge global catastrophe that was the financial crisis leaves him utterly tattered as a historical figure when he walks out of office,” NBC’s John Heilemann explained.

The hour concluded with three takes from Williams, author Lawrence Wright, and conservative commentator Pat Buchanan and only could the thoughts from the first gentlemen be considered positive as he ruled that “history will be far kinder to George Bush than Americans were toward the close of his term.”

It’s safe to say that, when CNN decides next year or so to rush through with a series on the 2010s, the final moments of an episode on the Obama presidency won’t focus on scandals involving the IRS, ObamaCare, Solyndra, or the Department of Veterans Affairs.