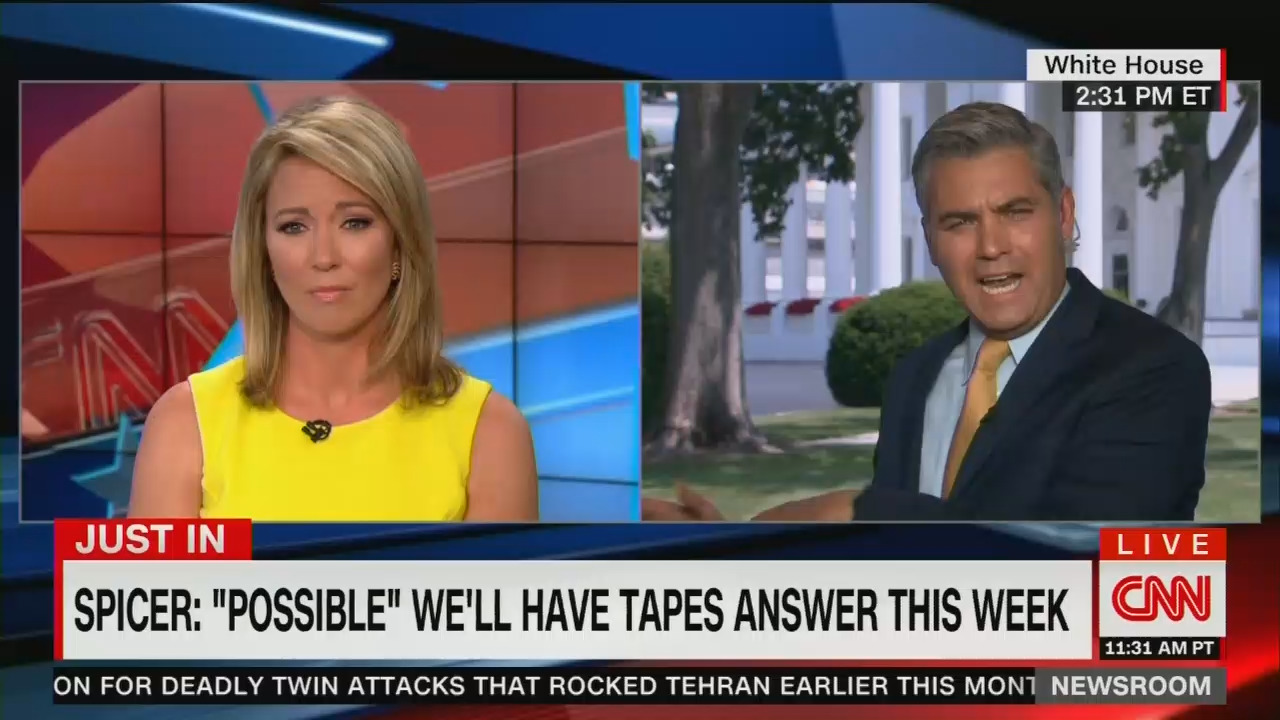 In 2017, CNN senior White House correspondent Jim Acosta gave viewers free doctorates in how to become showboaters and throw hissy fits. No matter where it was, Acosta left his mark on the year in media for all the wrong reasons.

Liberal journalists and White House critics view Acosta as an indispensable beacon of reason possessing a needed sense of urgency, but others (including this space) see him as a leading reason for why the media continued to lose credibility in 2017.

Before I go crazy looking at Acosta’s NewsBusters archive, here’s the ten craziest Acosta moments from the past year (presented in chronological order):

1. Acosta Loses It After Trump Calls Out CNN; ‘You Are Attacking Our News Organization’

Nine days before his inauguration, Trump held a press conference at Trump Tower and, while blasting CNN as “fake news” for being one of the news outlets that promoted the salacious Trump dossier, Acosta interjected.

Trump attempted to call on another reporter, but Acosta wouldn’t let up, shouting that he wanted to speak “[s]ince you are attacking our news organization.” Alas, Trump didn’t grant his request. He even chided Acosta for being “rude.”

The President last held a marathon news conference on February 16 and, needless to say, it was epic. From the moment Acosta began speaking and emphasized that he and CNN “don’t hate you,” one had to know that the mood was set to explode.

The pair tussled over Jeff Zucker, WikiLeaks, anonymous reporting, and more, but Acosta sent the debate into a higher gear when he accused the President of eroding the First Amendment: “Aren't you concerned, sir, that you are undermining the people's faith in the First Amendment, freedom of the press, the press in this country when you call stories you don't like fake news. Why not just say it's a story I don't like?”

3. Spicer Tells Off Acosta for Defending Liberals, ObamaCare; ‘Get Outside’ and ‘Talk’ to Americans

March 14's White House briefing marked one of many afternoons in which Acosta made himself the star of cable news. On this particular day, the focus centered around ObamaCare. Acosta put on a proverbial Superman cape in an effort to defend ObamaCare, asking then-press secretary Sean Spicer if the President was “okay with that there are going to be millions of people who aren’t going to have coverage.”

As this space wrote at the time, it never reached the level of shouting that other Acosta moments morphed into, but “Acosta showed his naivete while Spicer explained how millions haven’t bought health care despite the individual mandate because the current system is unaffordable.”

Acosta took his charade to an April 12 Newseum event dedicated to the news media and insinuated that it’s un-American to condemn the news media. He also dabbled in fearmongering when he predicated that Trump could end up rendering the news media extinct.

As expected, he not only refused to apologize for causing a scene at briefings and press conferences but doubled down on his behavior as a necessity:

If our news organization is being attacked, my sense is that that cannot go without any kind of response and, you know, really quickly, that night I heard from a news executive from another network who said: “Hey, you did a great job today defending our network.” And I said – I texted back to him, I said: “I was defending all of us because it could be your network tomorrow.”

More than any other moment on this list, this blog is an absolute must-read and can be found here.

5. Acosta Loses It Over No Audio, No Video WH Briefing; ‘Don't Know What World We're Living In’

The summer months featured temporary changes at the White House press briefing with some briefings only being shown audio-only and others without audio or video. In both cases, Acosta voiced his displeasure. The CNN correspondent took to CNN Newsroom on June 19 since audio and video were barred and, for lack of a better term, lost his mind.

A week after Acosta’s meltdown, the Spicer-led briefing was audio-only. Instead of grilling Spicer on the news of the day, Acosta aired his grievances about the briefing’s set-up. When Acosta demanded Spicer answer a question that had been asked by another reporter, Spicer reminded him that “[t]here’s no camera on.”

Acosta was then triggered and repeatedly shouted about the cameras being “off.” Naturally, he took his message to his CNN colleagues after the briefing, complaining that Spicer has refused to formally call on them “for weeks now” to the point that he declared that the White House had “blackballed” CNN.

August 2 was quite the day for Acosta as he again made himself the story with a highlight reel that morphed into its own news cycle. The topic was immigration and a briefing featuring White House policy adviser Stephen Miller. The full exchange and transcript can be found here.

Acosta insisted on being a political activist and reciting the poem that was added to the State of Liberty as part of his squabble with Miller. He also insisted to Miller that the White House seems to “trying to engineer the racial and ethnic flow of people into this country.”

Unfortunately, Acosta embarrassed himself and CNN. Miller hit back by telling him that he’s not only “ignorant” on immigration but his statements “reveals your cosmopolitan bias to a shocking degree” and were “one of the most outrageous, insulting, ignorant and foolish things you've ever said.”

CNN Newsroom triumphantly welcomed him back after the briefing and allowed Acosta to rule that the administration’s immigration policies are a “dog-whistle” to the base and a sign that the executive brace is “infected” with a disdain for Mexicans, Muslims, and the media.

Hurricane Irma was still wreaking havoc on Florida and its neighboring states when Acosta played the role of climate change activist, all but demanding Homeland Security advisor Tom Bossert consider the likelihood on September 11 that Irma and Hurricane Harvey were caused by climate change and thus the FEMA budget should be boosted.

9. ‘How Is All That Not Collusion?’ Acosta Squabbles with WH’s Sanders on Indictments

Hours after the first indictments were handed down in the Mueller investigation, Acosta wondered to press secretary Sarah Huckabee Sanders on October 30 how these new Russia developments didn’t amount to sufficient proof that the Trump camp colluded with Russia to steal the election from Hillary Clinton.

So, a journalist floated a final conclusion for the probe that’s likely to drag on for months, if not years? Needless to say, it showed that Acosta is anything but neutral.

10. Kaboom! Acosta, Sanders Throw Down in WH Briefing; ‘I’m Not Taking Another Question From You’

Huckabee Sanders cited the latest NewsBusters study from Rich Noyes on the plethora of negative coverage on the evening newscasts of ABC, CBS, and NBC during a debate with Acosta about media accuracy when, as predicted, he began shouting.

After telling him repeatedly that she was “not finished” and “not done” speaking, Huckabee Sanders eventually moved on to Lifezette’s Jim Stinson by informing the CNN showman that “I’m not taking another question from you.”