White House adviser Stephen Miller absolutely eviscerated the “cosmopolitan bias” of CNN journalist Jim Acosta, slamming his immigration claims as “ignorant.” Appearing at a briefing on Donald Trump’s new merit-based immigration policy, Acosta began by lecturing, “What you're proposing, or what the President is proposing, does not sound like it’s in keeping with American tradition when it comes to immigration.”

He complained, “Can’t people learn how to speak English when they get here?” Acosta accused the White house of only wanting immigrants from "Great Britain and Australia." Miller shot back: “I honestly have to say I am shocked at your statement that you think that only people from Great Britain and Australia would know English.  It reveals your cosmopolitan bias to a shocking degree.”

The CNN journalist then slimed the policy as bigoted: “It just sounds like you're trying to engineer the racial and ethnic flow of people into this country.”

Miller fought back: “Jim, that is one of the most outrageous, insulting, ignorant and foolish things you've ever said and for you that's still a really — ” The senior advisor for policy trailed off. Was he going to say “low bar?”

Miller attacked, “Insinuations like Jim made trying to ascribe nefarious motives to a compassionate immigration measure designed to help newcomers and current arrivals alike is wrong.” Acosta closed by whining, "You called me ignorant on national television!"

The fight must be seen to be believed. A full exchange is below:

[Thanks to the MRC's Nick Fondacaro for the video.] 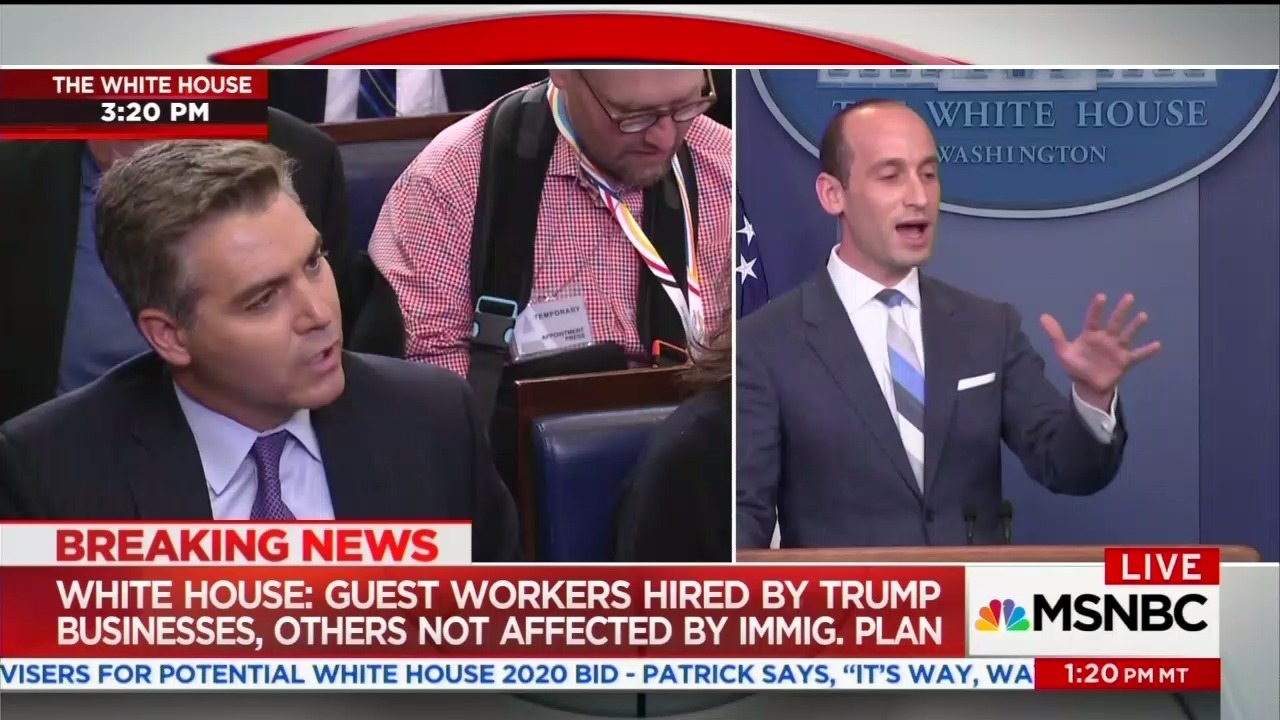 JIM ACOSTA: What you're proposing, or what the President is proposing, does not sound like it’s in keeping with American tradition when it comes to immigration. The Statue of Liberty says, “Give me your tired, your poor, your huddled masses yearning to breathe free.” It doesn't say anything about speaking English or being able to be a computer programmer. Aren't you trying to change what it means to be an immigrant coming into this country if you're telling them you have to speak English? Can't people learn how to speak English when they get here?

STEPHEN MILLER: Well, first of all, right now it's a requirement that to be naturalized you have to speak English. So the notion that speaking English wouldn’t be a part of immigration would actually be very ahistorical. Secondly, I don't want to get into a whole thing about history here, but the Statue of Liberty is a symbol of liberty lighting the world. It’s a symbol of American liberty lighting the world. The poem that you're referring to was added later. It's not actually a part of the original Statue of Liberty. But more fundamentally —

ACOSTA: So, you're saying that that does not represent what the country has always thought of as immigration coming into this country?

MILLER: I’m saying that the notion of —

ACOSTA: Stephen, I’m sorry. That sounds like some National Park revisionism. The Statue of Liberty has always been a symbol of hope to the world for people to send people to this country and they’re not always going to speak English, Stephen.

MILLER: Jim, do you believe —

ACOSTA: They’re not always going to be highly skilled.

ACOSTA: You're sort of bringing a “press one for English” philosophy to immigration  here for -- and that's never been what the United States is about, Stephen.

MILLER: Your statement is also shockingly ahistorical in another respect too, which is if you look at the history of immigration, it's actually ebbed and flowed. We've had periods of very large waves followed by periods of less immigration and more immigration. You've had —

ACOSTA: We're in a period of immigration right now that wants to build a wall. You want to bring about a sweeping change to —

MILLER: Surely, Jim you don’t actually think that a wall effects green card policy. You couldn’t possibly believe that, do you? Actually, the notion that you actually think immigration is at a historic low — the foreign born population of the United States today — Jim — Jim —

ACOSTA: The new chief of staff on Monday talking about how border crossings were —

MILLER: Do you really — I want to be serious. Do you at CNN really not know the difference between green card policy and immigration? You really don’t know that?

MILLER: Jim, as a factual question —

ACOSTA — not through Ellis Island in their own ways can obtain a green card at some point. They do it through a lot of hard work. And yes, they may learn English as a second language later on this life, but this whole notion of well, they have to learn English before they get to the United States, are we just going to bring in people from Great Britain and Australia?

MILLER: Jim, I honestly have to say I am shocked at your statement that you think that only people from Great Britain and Australia would know English.  It actually reveals your cosmopolitan bias to a shocking degree that in your mind —  This is an amazing moment. This is an amazing moment that you think only people from Great Britain or Australia would speak English is so insulting to millions of hard-working immigrants who do speak English from all over the world. Jim, have you honestly never met an immigrant from another country who speaks English outside of Great Britain and Australia? Is that your personal experience?

ACOSTA: Of course there are people who come —

MILLER: But that's not what you said! It shows your cosmopolitan bias!

ACOSTA: It just sounds like you're trying to engineer the racial and ethnic flow of people into this country.

MILLER: Jim, that is one of the most outrageous, insulting, ignorant and foolish things you've ever said and for you that's still a really —  the notion that you think that this is a racist bill is so wrong and so insulting.

ACOSTA: I didn’t say it was a racist bill.

MILLER: Jim, the reality is is that the foreign born population into our country has quadruped you since 1970. That's a fact. It's been mostly driven by green card policy. Now, this bill allows for immediate nuclear family members to come into the country, much as they would today — and it adds an additional points based system. The people that have been hurt the most — The people who have been hurt the most by the policy you're advocating are —

APRIL RYAN: Are you targeting African American community? You brought it up again. You said you want to have a conversation and not target. Is it going to be a target —

MILLER: What we want to do —

RYAN: You’re using the African-American community. Are you going to target? I'm not trying to be funny, but you keep saying this.

MILLER: What you’re saying is 100 percent correct.  We want to help unemployed African Americans in this country and unemployed workers of all backgrounds get jobs. And insinuations like Jim made trying to ascribe nefarious motives to a compassionate immigration measure designed to help newcomers and current arrivals alike is wrong. And this is a positive, optimistic proposal that says ten years, 20 years, 30 years from now.

ACOSTA: You called me ignorant on national television.

MILLER: 20, 30 years from now we want to have an immigration system that takes care of the people who are coming here and the people who are already living here by having standards, by having a real clear requirement that you be able to support yourself financially, by making sure that employers can pay a living wage. That's the right policy for our country, and it's the President's commitment to taking care of American workers. I apologize, Jim, if things got heated, but you did make some pretty rough insinuations. Thank you.