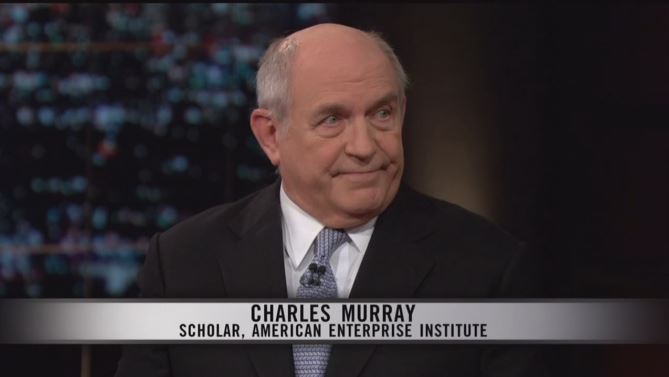 Reporter Lisa Rathke boasted in her dispatch that “[h]undreds of college students on Thursday protested a lecture by a writer some called a white nationalist, forcing the college to move his talk to an undisclosed campus location from which it was live-streamed to the original venue but couldn’t be heard above protesters’ chants, feet stamping and occasional smoke alarms.”

Rathke was more than happy to seek help from the far-left Southern Poverty Law Center, touting their belief that Murray is a “white nationalist” using “racist pseudoscience and misleading statistics to argue that social inequality is caused by the genetic inferiority of the black and Latino communities, women and the poor.”

She reported that Middlebury students “turned their backs on Murray just as he started to speak Thursday” and berated him until he left the venue which also wasn’t heard because “[s]tudents their protests, drowning out the talk.”

Rathke also touted a letter by alumni denouncing the American Enterprise Institute scholar’s appearance at their alma mater as “unacceptable.” This comment teed up a quote from protester Elizabeth Dunn, who embodied the issue of liberal censorship on college campuses:

Both students and other community members came out to show that we are not accepting these kind of racist, misogynistic, eugenist opinions being expressed at our college...We don’t think that they deserve a platform because they are literally hate speech.

In true fashion for the liberal media, support for Murray arrived down in paragraph eight and was followed two paragraphs later by noting that “Middlebury College said the student group had a right to invite Murray and a sponsorship doesn’t mean a department endorses a speaker’s point of view.”

In part, Rathke concluded: “The college said it was disappointed that the event was so heavily disrupted...Murray’s talk was recorded so students can hear it later.” 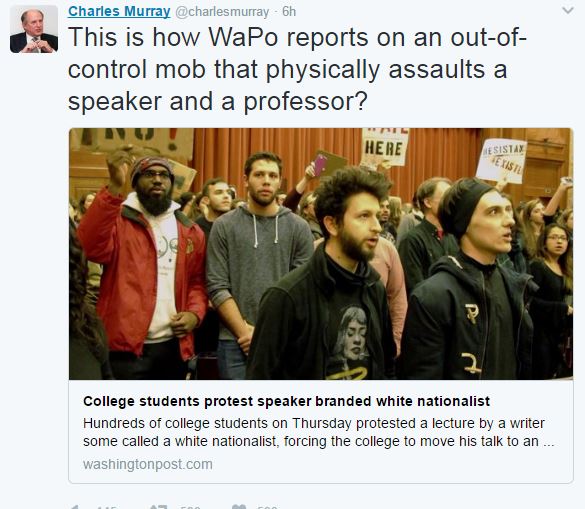 “Report from the front: The Middlebury administration was exemplary. The students were seriously scary,” Murray tweeted near the end of the evening.

National Review’s Charles C.W. Cooke blasted the “mob” on Twitter as one that’s “full of stunted, self-indulgent people who know and understand nothing.” He added that “these really are America’s dumbest people.”

Representing the above demographic, Vox’s Matthew Yglesias uncorked this doozy on Twitter: 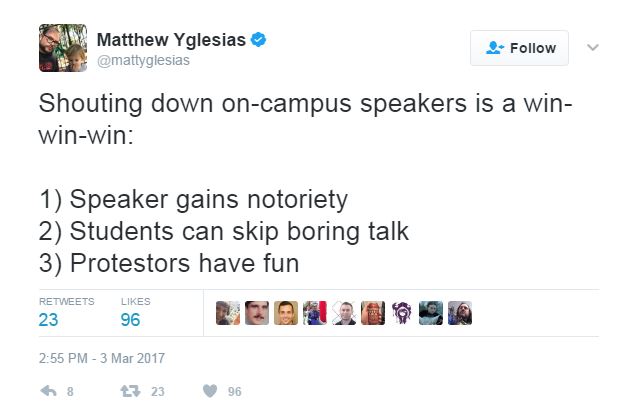