On Monday, the morning and evening newscasts of ABC and NBC failed to highlight, in their coverage of the death of Supreme Court Justice Antonin Scalia, that Democratic Senator Chuck Schumer’s decision to come out in support of whomever President Obama nominates flies in the face of what he said in 2007, 18 monhs before the end of the presidential term, about vowing to block any Supreme Court nomination by then-President George W. Bush.

At no point on ABC’s Good Morning America or World News Tonight nor NBC’s Today or NBC Nightly News did Schumer’s flip-flopping fetch even a scant mention as they instead chided and painted Republicans as purely partisan figures in the two days since the conservative Justice died (see here, here, and here).

In contrast, both CBS This Morning and the CBS Evening News with Scott Pelley brought up Schumer thanks to congressional correspondent Nancy Cordes.

On the latter program, she provided soundbites from Republican Senators Ted Cruz (Tex.) and Lindsey Graham (S.C.) before moving onto “Democrats like New York’s Chuck Schumer” who “argued President Obama still has nearly a year left in his term.”

She then played a clip of Schumer opining on the matter to ABC’s This Week host George Stephanopoulos: “When you go right off the President and say, I don't care who he nominates, I am going to oppose him, that's not going to fly.”

At that point, Cordes stepped in to expose how “Schumer felt differently in the final year of President George W. Bush's term when he argued Democrats should block Bush nominees because, quote, ‘the Supreme Court was already dangerously out of balance.’”

The transcript of the segment from the CBS Evening News with Scott Pelley on February 15 can be found below. 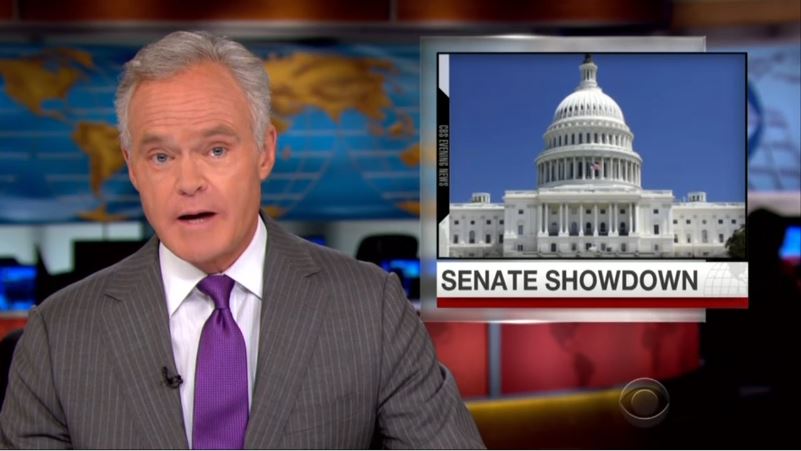 SCOTT PELLEY: In fact, it would be rare for the Senate to turn the President down in an election year. In the 20th century, the Senate voted on seven Supreme Court nominees during election years, and it approved all but one. Nancy Cordes is on Capitol Hill.

REPUBLICAN SENATOR TED CRUZ (Tex.): I intend to make 2016 a referendum on the U.S. Supreme Court.

CORDES: On Capitol Hill, Republicans on the pivotal Senate Judiciary Committee, from Ted Cruz to Lindsey Graham, vowed to block virtually any nominee, calling the President a lame duck.

REPUBLICAN SENATOR LINDSEY GRAHAM (S.C.) (on CBSN, 02/13/15): This will probably be left up to the next president.

DEMOCRATIC SENATOR CHUCK SCHUMER (N.Y.) [on ABC’s This Week, 02/14/16]: When you go right off the president and say, I don't care who he nominates, I am going to oppose him, that's not going to fly. 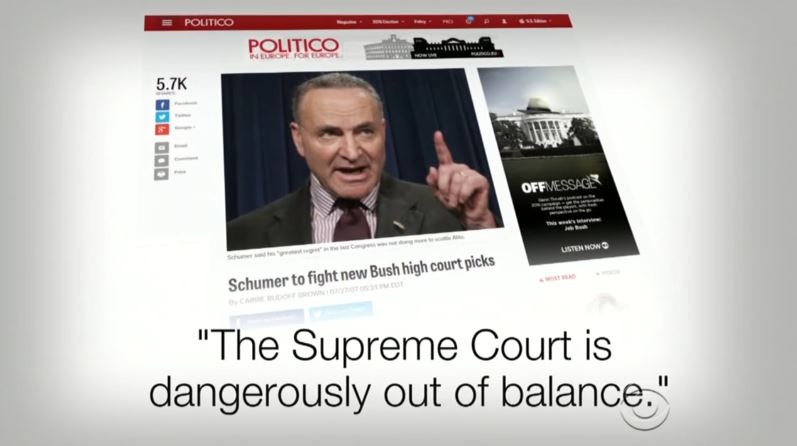 CORDES: But Schumer felt differently in the final year of President George W. Bush's term when he argued Democrats should block Bush nominees because, quote, “the Supreme Court was already dangerously out of balance.” There isn't much precedent for a fight like this. Congress has never taken more than 125 days to vote on a Supreme Court nominee, but legal scholar Jonathan Turley says this time could be different.

JONATHAN TURLEY: Conservatives clearly despise President Obama, and they revere Justice Scalia. It's a bad mix, so you will have a battle royale no matter who is appointed.

CORDES: Some Republicans told me they would be open to considering a, quote, “consensus choice,” but they haven't been able to give me any names of who might fit that description. Scott, that's because even a moderate nominee would end up pulling the Court to the left of where it has been.