After the “big three” networks of ABC, CBS, and NBC neglected to cover the State Department Inspector General (IG) doling out a subpoena to the Clinton Foundation on Thursday, PBS NewsHour Democratic Debate moderators Gwen Ifill and Judy Woodruff failed to even mention this, Hillary Clinton’s e-mail scandal or Benghazi. Neither did Bernie Sanders.

Needless to say, the Fox News Channel’s post-debate edition of America’s Election HQ lambasted the trio for this failure to highlight the massive scandals at any point in the two-hour debate.

Weekly Standard senior writer and panelist Steve Hayes first alluded to this bias by omission in a tweet moments after the debate concluded:

Not one question on HRC and FBI/emails. Journalistic malpractice. #demdebate

As for FNC’s airwaves, National Journal’s Ron Fourier laid much of the blame at the feet of Sanders. Fournier led into this attack by blasting Clinton for not “sharpen[ing] her message” and “still meandering all over the place”: “Bernie Sanders for the love of God, how do you go throughout the debate and not mention e-mails? Not mention that the State Department and IG went after the Clinton Foundation?”

Baier jumped in and emphasized that “there wasn’t a question” asked by Ifill or Woodruff to which Fournier shot back that “[i]f I'm running for president, you don't have to ask me that question. I’m bringing it up myself.”

The Special Report host and two-time 2016 GOP debate moderator made clear that he would bring it up if he were at the debate table and Fournier complimented him for stating that because “[y]ou would ask it again and again, as you should” since “[i]t's a very pertinent question.”

Speaking to Democratic National Committee (DNC) Chairwoman Debbie Wasserman Schultz, Baier brought up Clinton’s horrendous honesty and trustworthiness ratings in the New Hampshire exit polls but also whether she believes the Clinton campaign’s line “[t]hat the State Department IG is somehow operating in a political realm that he somehow has a vendetta against Secretary Clinton.”

When the panel returned for a final segment, Baier observed to Hill columnist A.B. Stoddard that “this situation is only going to increase about the e-mails, the Foundation, surprising that it did not come up tonight.”

Stoddard agreed and described its absence as “stunning” and provided Clinton a full and “complete pass on a terrible day and it's going to be a very tough couple weeks for her.”

To be fair, the topic came up in CNN’s post-debate coverage when Philadelphia-based radio talk show host and CNN commentator Michael Smerconish repeatedly questioned Wasserman Schultz on this matter as well:

Today, we learned that the State Department....served a subpoena on the Clinton Foundation. It’s a big story and yet tonight, there were no questions on that subject where Secretary Clinton, according to exit surveys in New Hampshire and elsewhere, has problems with the electorate in terms of honesty and trustworthiness, don't up think she’d be better served if there was more questioning in a forum like tonight on that particular subject?

When the Democratic Congresswoman dodged the matter, Smerconish backed off and attempted to retry in a friendlier way:

SMERCONISH: But how does she overcome those hurdles unless there's more discourse in a setting like this?

WASSERMAN SCHULTZ: Now, come on, Michael, you know it's not my responsibility or appropriate to handicap, you know, the strategies or how each candidate on our side of the aisle would deal with things[.]

The relevant portions of the transcript from FNC’s America’s Election HQ on February 11 can be found below. 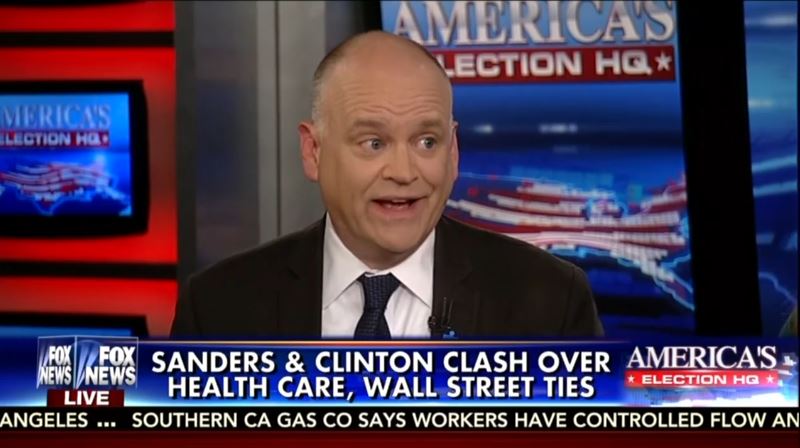 RON FOURIER: Hillary Clinton did not sharpen her message. She is still meandering all over the place. What does she stand for? It’s really hard to tell and Bernie Sanders for the love of God, how do you go throughout the debate and not mention e-mails? Not mention that the State Department and IG went after the Clinton Foundation?

BRET BAIER: Well, we should also point out there wasn't a question.

FOURIER: But you know what? If I'm running for president, you don't have to ask me that question. I’m bringing it up myself.

BAIER: But if I'm moderating, I have to ask it.

FOURIER: You would ask it again and again, as you should. It's a very pertinent question. Secondly, you want to get to the left of Hillary Clintom, where you go to the left of her and even to the left of President Obama is on judicial reform. You say the President hasn't shown enough clemency. He hasn’t shown enough mercy to this community. You say, these are the kinds of proposals I'm going to do to bring some racial equality to the sentencing issues. Instead of both talking about it, he didn’t really go to her and say you have not done enough for this community. He could make that case. For some reason, he’s afraid to make it. 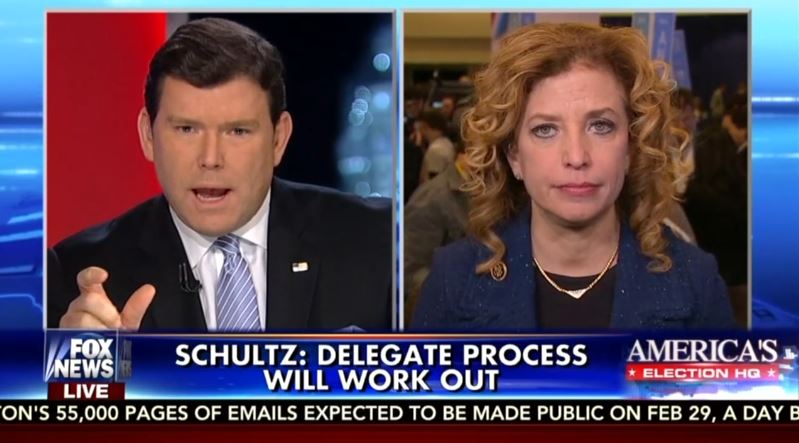 BAIER: Let me ask you another thing. As you look through the exit polls in New Hampshire, Congresswoman, and you see honest and trustworthy numbers and you see Sanders getting 92 percent based on this question of honesty and trustworthy versus Clinton's six percent. Is there a problem there for Hillary Clinton?

DEMOCRATIC NATIONAL COMMITTEE CHAIRWOMAN DEBBIE WASSERMAN SCHULTZ: You know, Bret, I'm neutral when it comes to the outcome of the Democratic primary so it's not for me to comment on the attributes or criticisms of either of our candidates.

BAIER: You've been a proponent of transparency. I remember talking to you numerous times in the Bush administration where you brought up transparency. Given that history, do you think that Secretary Clinton should release the transcripts of those Wall Street speeches?

WASSERMAN SCHULTZ: You know, that’s something that is going to be up for the secretary. When it comes to transparency related to her official work, she released 55,000 pages of e-mails[.]

WASSERMAN SCHULTZ: Again, I'm not going to zero in on, as far as my opinion on specific criticisms related to our candidates. You know, I do say that it doesn't really compute in my mind as a member of congress putting that hat on where you have information when transmitted was not classified, then is classified after the fact. I mean, so that is an important distinction and so, when something is classified after the fact, you know, it's then difficult to criticize someone who, at that time, clearly was transmitting information that they knew was not classified and that’s an important distinction.

BAIER: A.B., listening to Tom Fitton and others and with Judicial Watch, this situation is only going to increase about the e-mails, the Foundation, surprising that it did not come up tonight. 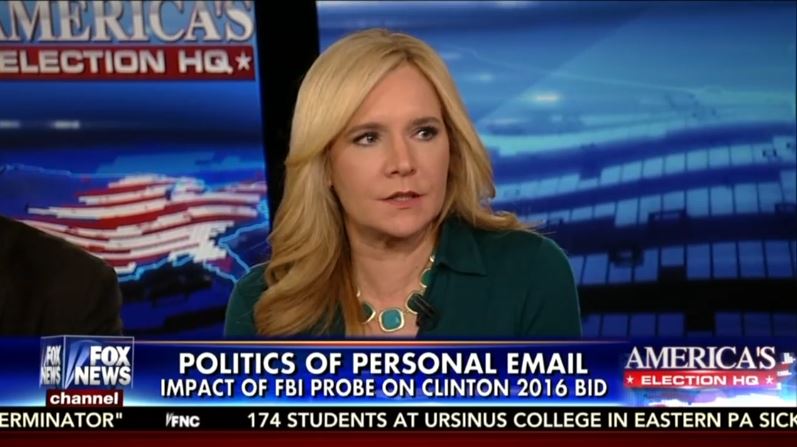 A.B. STODDARD: It's stunning it didn't come up tonight. She had a great night. She performed well and she got the completely pass on a terrible day and it's going to be a very tough couple weeks for her. Look, I think timing couldn't be worse. It doesn't mean she's not going to win contests. It doesn’t mean that she might not end up the nominee. She probably will, but you think about the momentum that he has right now, the questions about her legal jeopardy, combine that with the fact that you know, young African-Americans, young Latinos, they’re young too. Not just young white people are attracted to the message of Bernie Sanders and they don’t really care who the Congressional Black Caucus PAC endorses, so I think she's got a lot of work ahead to do to sort of blunt the energy he's created and we can see it in the faces of the campaign, they're just having a tough time.