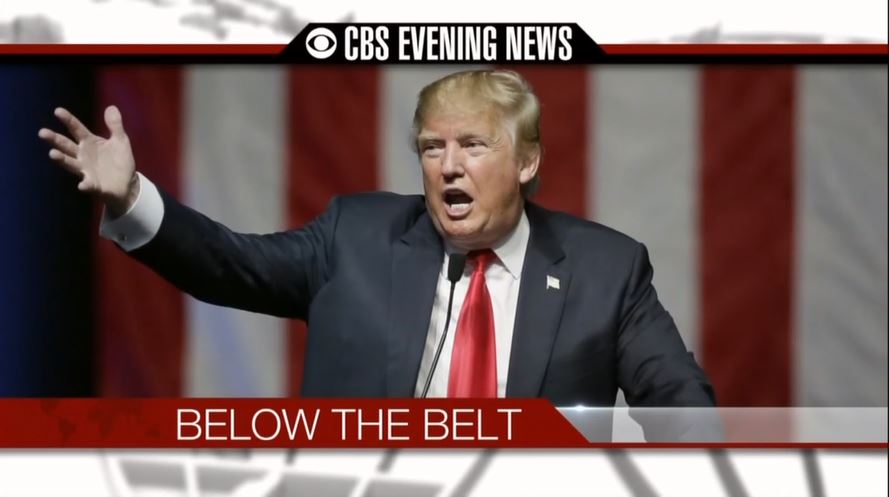 Just over two weeks after the major network evening newscasts spent 24 minutes obsessing on December 8 over Donald Trump’s proposed ban on Muslims entering the U.S., the three programs returned on Tuesday night to devote ten and a half minutes to Trump’s declaration that Hillary Clinton was “schlonged” in 2008 by losing to then-Senator Barack Obama.

While one can make what they will of Trump’s comment and rule whether or not it’s deplorable or outrageous, the 10 minutes and 31 seconds dwarfed in comparison to the time spent Tuesday on Clinton’s continued inability to prove that Trump is being used in ISIS recruitment videos with ABC’s World News Tonight giving only three sentences to Clinton’s fib.

As was the case when it came to the Muslim ban coverage, NBC Nightly News had the most coverage on Tuesday with two segments totaling four minutes and 32 seconds. Anchor Lester Holt opened the broadcast by wondering:

If there is a limit to how far Donald Trump will go with his crude insults and school yard-like taunting, we're still waiting to see it. His latest verbal assaults include a public mocking of Hillary Clinton’s bathroom habits, a vile depiction of her last defeat, and declaring his hate for some in the media, whipping up an angry crowd against the press there to cover him, but of course, it is playing well to his core of supports who embrace his boldness.

Along with touting Clinton speaking with a young girl in Iowa about bullying, Trump correspondent Katy Tur hyped that the crowd at the Trump rally on Monday “was anything but merry and bright” as reporters like her were “booed and cheered” by the “riled up and angry” crowd.

Meet the Press moderator Chuck Todd joined Holt afterward for analysis and hinted that Trump supporters were racist for embracing their candidate’s slogan of “Make America Great Again” because “Again” acts as a “codeword”:

There is – it’s the anti-political correctness idea. It’s the idea that everything — all of these major changes that have happened demographically in this country, he is tapping into — into this idea that oh, things are changing fast and don't you miss the old good days? Look, the whole reason for the slogan “Make America Great Again.” It’s the whole again. That is the codeword of saying the way it was. The way before we made all of these changes. The way before your culture changed.

Among the other highlights, the CBS Evening News spun Trump’s latest controversial comment as “below the belt” as chief White House correspondent Major Garrett described it as “nothing compared to” other “standard” ones by Trump that were deemed “abrasive, accusatory, [and] slightly bizarre.”

Just ahead of CBS’s two minutes and eight seconds but behind NBC was ABC, which led the newscast (ahead of stories on Bowe Bergdahl’s arraignment, identities of the six U.S. troops killed in Afghanistan, and the weather) with Trump fetching three minutes and 51 seconds over the course of a full report and news brief.

ABC anchor David Muir similarly fawned over how “there was a moment today on the campaign trail when a little girl asked Secretary Clinton a question” about bullying while employing his almost-too-frequently used phrase of “war of words” between Clinton and Trump.