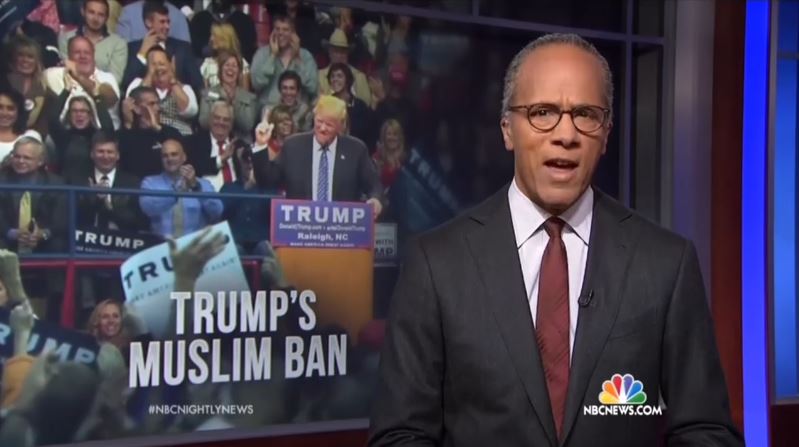 Acting as though the latest news the war against ISIS, new developments in the Hillary Clinton scandal or any other story barely existed, the “big three” networks of ABC, CBS, and NBC devoted a whopping 24 minutes and three seconds of their Tuesday evening newscasts to obsessing over Donald Trump’s proposed ban on Muslims entering the United States.

Not surprisingly, NBC Nightly News led the way by spending nearly half its newscast on Trump with five segments adding up to 12 minutes and 34 seconds. Trump campaign correspondent Katy Tur started with an overview of the fallout regarding Trump’s proposal before giving way to correspondent Hallie Jackson looking at the Republican Party’s near uniformity in denouncing him.

Chief foreign affairs correspondent and MSNBC host Andrea Mitchell made sure to have her own input on the matter as she was given the third segment examining the belief among some that Trump’s rhetoric will inspire further ISIS recruiting.

Back live, anchor Lester Holt had a panel discussion with Meet the Press moderator Chuck Todd and chief foreign correspondent Richard Engel in which Todd reaffirmed his argument from earlier in the day that Trump has “hijacked” the Republican Party while Engel echoed much of what Mitchell opined moments beforehand.

At the end of the program, former NBC Nightly News anchor Tom Brokaw was given the floor for a commentary that compared Trump’s views to Japanese internment, Nazism, McCarthyism, and racism fighting the Civil Rights movement in the 1960's.

Brokaw declared that the ban of all Muslims is “more, much more, than a shouted campaign provocation” but rather “is a dangerous proposal that overrides history, the law, and the foundation of America itself.”

Speaking of his generation (the Greatest Generation), Brokaw ruled that “we have been witness to the consequences of paranoia overriding reason.” Nodding in agreement afterward, Holt commented that one of his predecessors had provided “something for us to think about.”

ABC’s World News Tonight followed in second with a still-daunting seven minutes and 33 seconds of airtime on Trump spread across three stories.

Republican campaign correspondent Tom Llamas followed the lead of NBC’s Tur with setting the scene for viewers in the first segment, but he was then followed by Barbara Walters sitting down with Trump for an ABC News exclusive about the ban on all Muslims entering the U.S.

Clinton campaign correspondent Cecilia Vega came after Walters with a piece similar to NBC’s Jackson as she summarized the condemnations of Trump on both the right and left.

Running in third, the CBS Evening News only spent three minutes and 56 seconds as chief White House correspondent provided the only full segment on Trump. 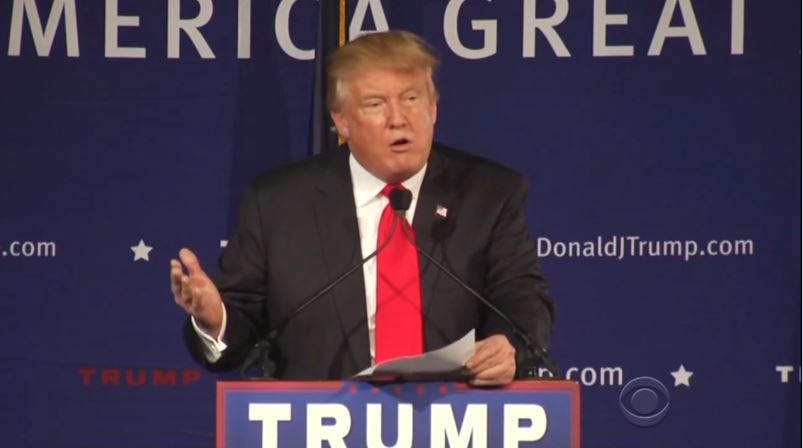 Anchor Scott Pelley added two news briefs that continued the media’s attack on Frank Gaffney of the Center for Security Policy by touting the Southern Poverty Law Center’s description of him as “one of America's most notorious Islamaphobes.”

Pelley concluded the Trump coverage with a 22-second news brief referring to how “Trump’s plan was condemned all around the world today” and read tweets from French Prime Minister Manuel Valls and Conservative London Mayor Boris Johnson.

While one can make what they will of Trump and his policy positions, it’s unfortunate that the liberal media spent such a significant time on Trump (and nearly half the newscast in the case of NBC) and diverted attention away from more coverage of San Bernardino, how Hillary Clinton intervened for her son-in-law in arranging State Department meetings with an underwater mining firm, and the bipartisan House vote to restrict travel by foreigners who’ve visited Iraq and Syria.