While the “big three” of ABC, CBS, and NBC all covered on Monday night the developments at the United Nations (U.N.) and the meeting between President Barack Obama and Russian President Vladimir Putin, it was ABC’s World News Tonight and NBC Nightly News that failed to go the distance and report that Obama’s disastrous rebel training initiative in Syria had been suspended.

In contrast, the CBS Evening News not only covered the announcement from the Pentagon but led the newscast with the story before turning to the scene at the U.N. Anchor Scott Pelley declared in the opening tease that “the U.S. shuts down it’s effort to train Syrian opposition forces, acknowledging an embarrassing failure.”

Pelley remained blunt in the introduction to Pentagon correspondent David Martin’s segment, highlighting how the icy encounters between Obama and Putin came “on the same day that the Pentagon was forced to concede that a key part of the President's Syria policy is a dismal failure.”

Martin used similar language as the CBS anchor, reporting that “[t]he $500 million program had once been a linchpin of the strategy to defeat ISIS, but so far, it has proved a fiasco.” He explained that the reason for the suspension came following the revelation that “a band of fighters turned over their U.S.-supplied equipment to terrorists linked to al-Qaeda.”

Before playing a soundbite from Putin, Martin added how it was “an embarrassing development Russia's Putin could not resist mentioning in his address to the United Nations.” Martin went to report that Putin outmaneuvered the U.S. on Monday by announcing a multi-state coalition of his own to fight the Islamic State by propping up Syrian dictator Bashar al-Assad.

Martin later concluded to Pelley that, considering the developments on Monday: “Scott, not since last year when ISIS swept across Iraq have the facts on the ground changed so dramatically as in the past month.”

Only after that dispatch did the attention shift to solely the Obama vs. Putin face-off at the U.N. with State Department Margaret Brennan providing details. NBC’s Andrea Mitchell and ABC’s Jonathan Karl did the same on their network’s newscasts, but none alluded to the shuttering of a program that the President hailed when he announced his so-called plan to defeat ISIS in September 2014.

Further, none offered any criticism of the Obama administration besides the admissions from NBC Nightly News anchor Lester Holt that “Putin managed to seize the agenda and the headlines” and Mitchell stating that: “Putin swaggered into the U.N. after a diplomatic military and P.R. blitz to seize the initiative from the U.S. that left the White House scrambling.”

The transcript of the tease and segment from the CBS Evening News with Scott Pelley on September 28 can be found below. 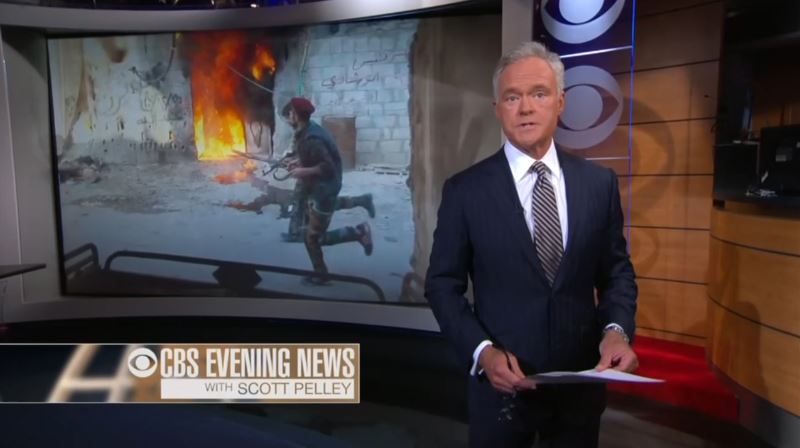 PELLEY: The picture tells the story. At the U.N. today, two world leaders about as far apart as two can be and still exchange a toast. Later, President Obama and Russian President Vladimir Putin met privately about their opposite views of the four-year-old war in Syria that has led to the rise of ISIS and set off an enormous refugee crisis. All of this on the same day that the Pentagon was forced to concede that a key part of the President's Syria policy is a dismal failure. David Martin tells us the program to train and equip Syrian opposition forces has been suspended. 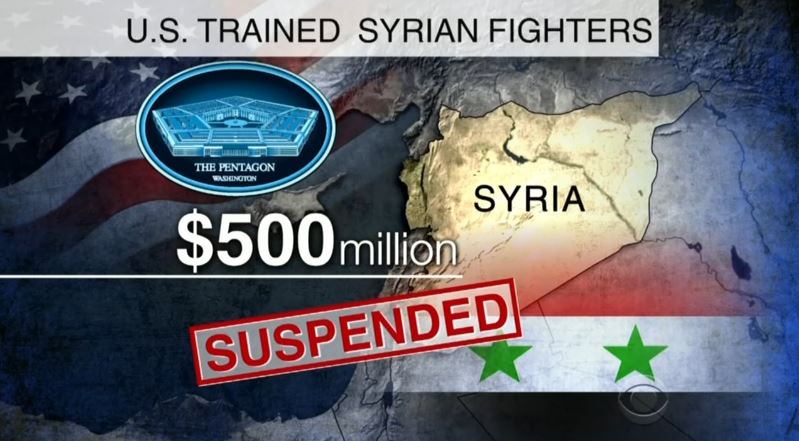 DAVID MARTIN: The $500 million program had once been a linchpin of the strategy to defeat ISIS, but so far, it has proved a fiasco. It was put on hold after a band of fighters turned over their U.S.-supplied equipment to terrorists linked to al-Qaeda, an embarrassing development Russia's Putin could not resist mentioning in his address to the United Nations. “First, they are armed and trained, and then they defect,” he said. Putin has injected himself into the middle of the battle for Syria with a sudden and unexpected establishment of an air base in western Syria. Pentagon officials say it is the largest Russian military deployment ever outside the borders of the old Soviet Union. Hiding from radar in the wake of large transport planes, a total of 28 fighter jets have flown into the base where the Russians have also stationed 16 helicopters along with surveillance drones. Putin claims they are ready to join the fight against ISIS, but he seems to make no distinction between ISIS and other groups trying to overthrow the regime of Bashar Al Assad, some of which are supported by the U.S. Although the jets have not flown any combat missions yet, the drones have been conducting surveillance flights to the east of the base, where opposition groups, but not ISIS, are located. Scott, not since last year when ISIS swept across Iraq have the facts on the ground changed so dramatically as in the past month.

PELLEY: David Martin at the Pentagon. David, thank you.