The New York Times is making hay during the intense Democratic politicization of the one-year anniversary of the violent Capitol Hill riots of January 6, 2021, what an online headline called “the worst American attack in democracy in centuries.” (How many centuries are we talking about here?) 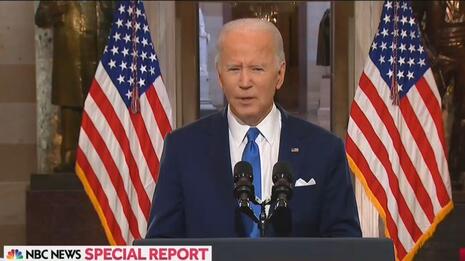 The paper went “live” on Thursday morning, blogging President Biden’s unusual speech from the U.S. Capitol where he intoned, “Those who stormed this Capitol and those who instigated and incited and those who called on them to do so held a dagger at the throat of America and American democracy.”

Catie Edmondson reported under the sneering subhead “Top Republicans, who have downplayed and denied the riot, are absent from the commemorative events.”

Top Republicans were nowhere to be found at the Capitol on Thursday as President Biden and members of Congress commemorated the deadliest attack on the building in centuries, reflecting the party’s reluctance to acknowledge the Jan. 6 riot or confront its own role in stoking it.

Yet oddly enough, Edmondson led with a top Republican who has been very harsh on Trump’s behavior.

Senator Mitch McConnell, Republican of Kentucky and the minority leader, was scheduled to be in Atlanta attending the funeral of former Senator Johnny Isakson, a Georgia Republican, along with many of the party’s senators.

In a statement, he called Jan. 6 “a dark day for Congress and our country,” in which the Capitol was “stormed by criminals who brutalized police officers and used force to try to stop Congress from doing its job.”

Times fact-checker Linda Qiu assured readers the Black Lives Matter related riots weren’t nearly so violent as the Capitol Hill assault, while melodramatically heightening the January 6 carnage under the headline “Despite denials, the riot was in fact violent, resulted in multiple fatalities, and did involve weapons.”

The riot at the Capitol resulted in injuries to about 150 federal and local police officers as well as $1.5 million in damages to the Capitol. Yet despite graphic videos depicting assaults and destruction, a chorus of prominent conservative voices have insisted that the events were largely nonviolent, akin to a “peaceful protest” or “normal tourist visit.” A year later, roughly a third of Republicans believe that the attack on the Capitol was mainly peaceful, according to several recent polls.

Mr. Trump has repeatedly, and misleadingly, compared violence at the Capitol riot to that of the racial justice protests of 2020. In several interviews on Fox News last year, he said “there were no guns whatsoever” and only one fatality during the riot compared with multiple fatalities, “plenty of guns” and “no repercussions” during Black Lives Matter protests.

Qiu declared that “false,” offering as rebuttal this rather sprawling catalog:

A bipartisan Senate report tied seven fatalities to the assault. On the day of the attack, two protesters died of heart attacks, one of an accidental overdose, and one -- Ashli Babbitt -- was shot [ahem, by police] while trying to enter the Speaker’s Lobby of the Capitol through a broken glass door. A Capitol Police officer died of multiple strokes a day after the attack, and two others killed themselves in the days afterward. (Two other officers died by suicide six months later.)

Another fact-check segment from Qiu: “Comparisons between the riot and Black Lives Matter protests can be misleading.” Qiu tortured the data to downplay the summer 2020 riots over the police killing of George Floyd.