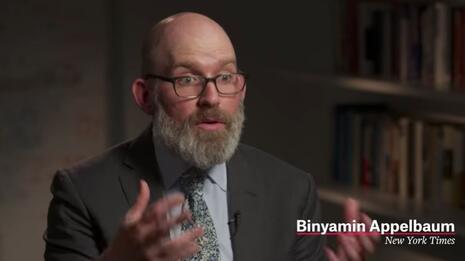 Former liberal New York Times economics reporter Binyamin Appelbaum is now free to issue untrammeled left-wing opinions from his seat on the paper’s editorial board. He backed more federal surveillance in the name of squeezing out the full measure of taxes from the citizenry: “Tax Evasion and the Republican Party.” The online headline was no more agreeable: “The Rotten Core of the Republican Party.”

Representative Kevin McCarthy of California, the top House Republican, recently took to social media to warn that Democrats have hatched a dastardly plot. “Democrats,” he said, “want to track every penny you earn so they can then tax you and your family at the maximum possible amount.”

What doesn’t get enough attention is that many Republicans seem not to agree.

Resistance to taxation is the rotten core of the modern Republican Party. Republicans in recent decades have sharply reduced the federal income tax rates imposed on wealthy people and big companies, but their opposition to taxation goes beyond that. They are aiding and abetting tax evasion.

(Sorry guys, guess the American Revolution is off!)

Myriad revelations of the historically overbearing, partisan behavior of the IRS went unmentioned; Appelbaum found any attempt to check the agency’s power “bureaucratic sabotage” or worse, while equating good citizenship to paying as much tax as possible.

Republicans have hacked away at funding for the Internal Revenue Service over the past decade, enfeebling the agency. When the rich and powerful open loopholes in the tax code, Republicans reliably fight to keep the loopholes open. Indeed, they valorize Americans who find ways to pay less, a normalization of antisocial behavior that may be even more damaging than the efforts at bureaucratic sabotage.

Under the current version of the Democrats’ plan, which is part of the Biden administration’s sweeping “Build Back Better” legislation, banks would be required to submit annual reports on accounts with total inflows and outflows exceeding $10,000, excluding paychecks and government benefits....

Next, he redefined freedom:

By way of ideological justification, Republicans like to talk about liberty, by which they mean a narrow and negative kind of freedom from civic duty and mutual obligation.

At least he’s honest; for him, taxation’s main benefit isn't so much raising revenue as it is to soak the rich in aid of the poor (i.e., “an antidote to inequality”).

History tells a different story. From the outset, taxation in the United States was designed as an antidote to inequality. The government initially chose to raise revenue through tariffs collected from wealthy merchants. The introduction of a federal income tax in the early 20th century was a different means to the same end. In a historical analysis published last year, a pair of German political scientists, Laura Seelkopf and Hanna Lierse, showed that progressive taxation is a hallmark of democratic governance.

He cast a policy disagreement as a metaphor for a physical attack on the government (shades of January 6?).

….In enabling resistance to lawful taxation, Republicans are engaged in an even more direct assault.

Having failed to constrain government spending through the democratic process, they are seeking to undermine government.

In 2019, Appelbaum wanted everyone’s tax returns made public – everyone would know how much money you made and how you made it, even what charities you donated to, in the name of reducing income inequality.