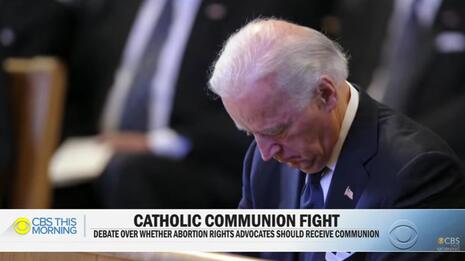 Catholic bishops in America voted to draft guidance regarding the Church’s sacrament of the Eucharist, guidance which would deny Holy Communion to public figures (including President Biden, a Catholic) who support abortion.

And the New York Times was aggrieved on Biden’s behalf, turning it into Saturday’s lead story by “faith”-beat reporter Elizabeth Dias: “Bishops On Path To Refuse Biden Holy Communion – A Rift Over Abortion – Movement in American Catholicism Is Also at Odds With Rome.”

The text box on the jump page of the 1,700-word story reduced the abortion issue to “sexual politics,” as if something besides life and death were involved: “Sexual politics are a low priority for both Biden and the pope.”

The Roman Catholic bishops of the United States, flouting a warning from the Vatican, have overwhelmingly voted to draft guidance on the sacrament of the Eucharist, advancing a push by conservative bishops to deny President Biden communion because of his support of abortion rights.

The decision, made public on Friday afternoon, is aimed at the nation’s second Catholic president, perhaps the most religiously observant commander in chief since Jimmy Carter, and exposes bitter divisions in American Catholicism. It capped three days of contentious debate at a virtual June meeting of the United States Conference of Catholic Bishops. The measure was approved by a vote of 73 percent in favor and 24 percent opposed.

If the bolded sentence above sounds familiar, Dias wrote a similar sentence while fawning over Biden’s liberal brand of religion in January 2021: “Mr. Biden, perhaps the most religiously observant commander in chief in half a century, regularly attends Mass and speaks of how his Catholic faith grounds his life and his policies.”

(NewsBusters noted the omission of former Sunday School teacher Jimmy Carter at the time, which has at least been rectified in Dias’s new piece.)

The Eucharist, or holy communion, is one of the most sacred rituals in Christianity, and bishops have grown worried in recent years about declining Mass attendance and misunderstanding of the importance of the sacrament to Catholic life.

But the move to target a president, who regularly attends Mass and has spent a lifetime steeped in Christian rituals and practices, is striking coming from leaders of the president’s own faith, particularly after many conservative Catholics turned a blind eye to the sexual improprieties of former President Donald J. Trump because they supported his political agenda. It reveals a uniquely American Catholicism increasingly at odds with Rome and Pope Francis.

Left unmentioned: Biden has moved leftward on the abortion issue after becoming a presidential candidate, dropping his opposition to federal funding for abortion procedures.

Dias managed to work in hostile Times coverage of another religious controversy:

The action is the latest sign of how the nation’s bitter political divisions are shaping religious life. Christians across denominations are facing similar divides. Earlier this week at the Southern Baptist Convention meeting in Nashville, a more moderate majority narrowly headed off a takeover attempt by a hard-right movement.

But the fact that Mr. Biden’s views on abortion are even a matter of public discussion is already a victory for conservative Catholics.

Shouldn’t the president’s views on such an important issue be relevant regardless?

Dias at least got the politics right, sometimes:

Mr. Biden, like Pope Francis, embodies a liberal Christianity focused less on sexual politics and more on racial inequality, climate change and poverty. His administration is a reversal of the power that abortion opponents, including bishops who advanced the measure, enjoyed under Mr. Trump.

The bishops are expected to vote on the forthcoming statement in November, ahead of the midterm elections, giving conservatives a tool to criticize Democratic politicians throughout the campaign cycle. Abortion has long been one of the most mobilizing political forces for the religious right.