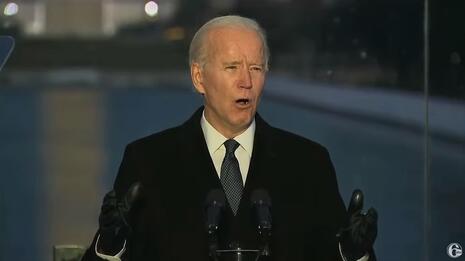 No, Dias applied her Masters of Divinity Degree to laud the new president's rhetorical resemblance to Jesus:

Hours before President Biden took the oath of office, he entered the front pew of the Cathedral of St. Matthew the Apostle, the seat of Catholic Washington, and beheld the mosaics behind the altar.

An intimate group of family, friends and congressional leaders had gathered for Mass, in the place where Pope Francis spoke in 2015 and where the funeral for John F. Kennedy, the nation’s first Roman Catholic president, was held.

When it was time for the homily, the Rev. Kevin F. O’Brien, the president of Santa Clara University and friend of the Biden family, compared Mr. Biden’s upcoming inaugural message to the words of Jesus.

“Your public service is animated by the same conviction,” he said, “to help and protect people and to advance justice and reconciliation, especially for those who are too often looked over and left behind.”

Except for those overlooked unborn babies.

There will no questioning of the wisdom of mixing faith and politics here, a trope the paper committed regularly Trump Secretary of State Mike Pompeo. There will certainly be no questioning of the sincerity or consistency of Biden’s pro-abortion Catholicism. Instead he’ll no doubt get the Nancy Pelosi treatment, as the House Speaker did in this notorious 2015 Times headline: "In Pelosi, Strong Catholic Faith and Abortion Rights Coexist."

Under the new liberal administration, religious observance has suddenly become a positive, not a red flag.

There are myriad changes with the incoming Biden administration. One of the most significant: a president who has spent a lifetime steeped in Christian rituals and practices.

Mr. Biden, perhaps the most religiously observant commander in chief in half a century, regularly attends Mass and speaks of how his Catholic faith grounds his life and his policies.

And with Mr. Biden, a different, more liberal Christianity is ascendant: less focused on sexual politics and more on combating poverty, climate change and racial inequality.

His arrival comes after four years in which conservative Christianity has reigned in America’s highest halls of power, embodied in white evangelicals laser-focused on ending abortion and guarding against what they saw as encroachments on their freedoms. Their devotion to former President Donald J. Trump was so fervent that many showed up in Washington on Jan. 6 to protest the election results.

While Dias threw "hard-right" bombs at pro-life Republican Senators, Dias insisted "Mr. Biden’s leadership is a repudiation of the claim by many conservative leaders that Democrats are inherently anti-Christian."

After describing a few congressional exemplars of the Christian left, Dias returned to Biden. She again used the peculiar, reductive term “sexual politics” to refer to the concerns of conservative Christians, presumed to be opposition to abortion and to a lesser extent gay marriage.

While conservative Catholics have doubled down on abortion policy and religious freedom for the past four years, Mr. Biden’s policy priorities reflect those of Pope Francis, who has sought to turn the church’s attention from sexual politics to issues like environmental protection, poverty and migration.

Dias mentioned that Archbishop Jose Gomez of Los Angeles issued an extensive statement before the inaugural ceremonies expressed criticism for Biden's stance on "abortion, contraception, marriage, and gender," and added Cardinal Blase Cupich of Chicago objected to it as "ill-considered" on Twitter. But the story had to end on a sugary note with Michelle Ami Reyes of the progressive Asian American Christian Collaborative touting how Biden “adopted the posture of a chaplain” in a memorial service on the mall for victims of COVID-19.

“That is a deeply biblical posture,” she said, “mourning with those who mourn.”