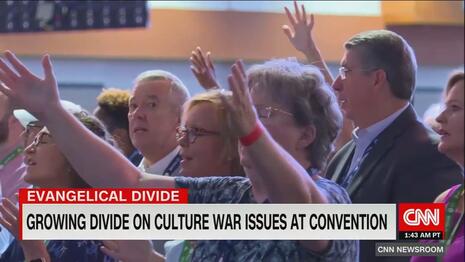 At the Southern Baptist Convention’s annual meeting in Nashville this week, the denomination elected a politically “moderate” pastor, Ed Litton of Alabama, as its new president, heading off what the New York Times repeatedly referred to as the body’s ultraconservative, far-right wing.

The front page of Thursday’s Times featured “Southern Baptist Vote Hardens Split Over Culture War Issue,” by religion correspondent Ruth Graham, with lots of “ultraconservative” labeling about the conference. Graham actually penned three long stories from the SBC meeting over a week. Besides the usual aversion to religious fundamentalism, the most striking part of the unusually long series on religion was the hostile labelling pattern.

Don’t even bother tallying the endless “conservative” or “right-wing” labels, which are standard in the slanted Times: Graham felt the need to pump up the threat even further with labels like “ultraconservative,” and “far-right.” Keep in mind as you see the scary labels that the supposed extremist dangers are from figures who have no actual legal authority, only church authority:

This week at the Southern Baptist Convention’s first meeting in two years, establishment conservatives narrowly headed off an aggressive takeover attempt by an ascendant hard-right movement.

This differentiates them from the ultraconservatives who sought this week to capture control of the Southern Baptist Convention. Leaders of the insurgency characterize Mr. Greear and his newly elected successor, Ed Litton, as moderate, or even progressive — which they intend as slurs.

Graham condescended to define what “conservatism” actually means, the opinion of the Southern Baptist Convention notwithstanding, assuring Times readers:

In the broad spectrum of American Christian culture, Mr. Litton can only be described as conservative.

Meanwhile, Georgia pastor Mike Stone “has embraced the denomination’s combative conservative wing that wants to foreground culture war issues like critical race theory." And Atlanta pastor Josh Buice “is also the founder of a conference that attracts many ultraconservative Baptists.”

But ultraconservatives did not lose every fight….

Besides the four “ultraconservative” labels, there were also four “hard-right” labels in the story, including in the subhead.

Graham’s story from the previous day, which covered the actual SBC vote, was also riddled with hostile labels, as could be inferred from the online headline, "Southern Baptists Narrowly Head Off Ultraconservative Takeover."

In all, the story contained three “ultraconservative” labels, including the online headline, and two versions of “far right.”

An earlier table-setting story from Graham and Elizabeth Dias appeared under the online headline "'Take the Ship': Conservatives Aim to Commandeer Southern Baptists." Besides the usual dozen or so “conservative” labels, there was one “ultraconservative populist uprising of pastors from Louisiana to California threatening to overtake the country’s largest Protestant denomination.”

There was also a familiar-sounding warning about “a populist groundswell within the already conservative evangelical denomination is trying to install an anti-establishment leader who could wrench the church even further to the right….”