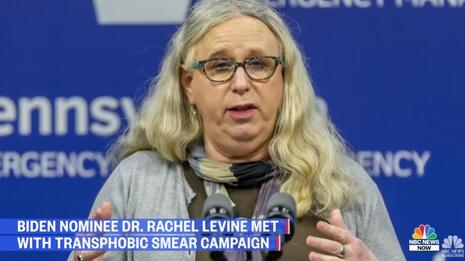 Dr. Levine, a former Pennsylvania health secretary, is now President Biden’s assistant secretary for health, the first openly transgender person ever confirmed by the Senate, and she has taken office in the middle of something of a transgender moment. A culture war is intensifying, waged largely by Republicans who have sought in state after state to restrict transgender rights and block transgender girls from participating on girls’ sports teams.

The Times can keep saying that Republicans are fighting about extraneous culture war issues and restricting “transgender rights,” but that won’t make it true.

….Dr. Levine is the highest-ranking openly transgender person ever to serve in the federal government.

“It’s political -- some people feel that this could be a wedge issue in the upcoming elections,” Dr. Levine said of the Republicans’ efforts, in one of her first interviews since taking office. “It is also that transgender people have become more prominent, so I think maybe some pushback for that. But I think at its heart, this is politics.”

Stolberg unleashed a rather underwhelming litany of supposed hatefulness Levine has had to endure.

Dr. Levine has suffered through her own share of false assumptions and attacks. A radio reporter insisted on calling her “sir.” Firefighters raised money at a county fair in Pennsylvania by putting a “Dr. Levine impersonator” -- a man wearing a dress and a wig -- in a dunk tank. Senator Rand Paul, Republican of Kentucky, grilled her about “genital mutilation” at her confirmation hearing.

….the push to restrict transgender rights is impossible for her to ignore.

Stolberg then ran through state bills that don’t actually restrict “transgender rights." Many of the bills do protect girls sports teams from being infiltrated by biological males.

While at Penn State, where she developed a division for adolescent medicine and eating disorders, she became active in the L.G.B.T.Q. advocacy movement, which drew the attention of Tom Wolf, a Democrat who was elected governor of Pennsylvania in 2014. The new governor named her physician general, the state’s top doctor when the health secretary is not a physician.

At the time, she said, there were “some attacks” on her, but “they were not that brutal.” But after she was elevated to health secretary and took a front-and-center position responding to the pandemic, the hate escalated.

At first, she tried to ignore it. But she drew the line at the dunk tank episode, and used her daily news conference to push back.

“While these individuals may think that they are only expressing their displeasure with me,” she said, they were hurting “thousands of L.G.B.T.Q. Pennsylvanians.”

Nowhere in this story was the 2020 controversy over Levine's 95-year-old mother being moved out of a personal-care facility as the state moved recovering COVID patients into nursing homes.

Stolberg ended the hagiography in heartwarming fashion by circling back to where she began this story, with Levine’s visit to her old all-boys school in Massachusetts.

They rewarded her with a standing ovation. She put her hand over her heart in gratitude.

Stolberg has twice before falsely suggested the GOP has targeted Levine to revive the culture wars – a “war” launched by left-wing activists. Then when Republicans defend the status quo, the Times dishonestly blames the GOP for starting a “culture war.”