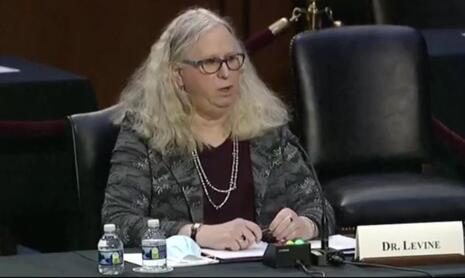 In congressional hearings Thursday, Sen. Rand Paul grilled Biden health nominee Rachel Levine, a transgender woman, on the idea of using hormones known as puberty blockers on minors suffering from so-called gender dysphoria, which the Mayo Clinic defines as “the feeling of discomfort or distress that might occur in people whose gender identity differs from their sex assigned at birth or sex-related physical characteristics.”

Reporters were outraged, none more so than the New York Times’ Sheryl Gay Stolberg, who characterized Rand’s calm, precise questioning as an anti-trans “tirade” on a hearings showdown between he and Levine, Biden’s nominee for assistant secretary of health.

A culture war over transgender rights erupted on Capitol Hill on Thursday, as a Republican senator attacked President Biden’s nominee to a top health post, and two members of the House -- one the mother of a transgender daughter -- sparred over legislation that would extend civil rights protections to L.G.B.T.Q. people.

The nominee, Dr. Rachel Levine, a former Pennsylvania health secretary and Mr. Biden’s pick to be assistant secretary of health, stands to be the first openly transgender federal official confirmed by the Senate, and her nomination has been cheered by advocates for transgender rights.

But Dr. Levine’s confirmation hearing briefly turned combative on Thursday, when Senator Rand Paul, Republican of Kentucky, opened his questioning with a tirade about “genital mutilation” and a demand to know whether the nominee supported gender reassignment surgery and hormone therapy for minors….

“You’re willing to let a minor take things that prevent their puberty, and you think they get that back?” Mr. Paul, who is an ophthalmologist, said at one point. “You give a woman testosterone enough that she grows a beard -- you think she’s going to go back looking like a woman when you stop the testosterone?”

Dr. Levine replied that, “Transgender medicine is a very complex and nuanced field with robust research and standards of care” that she would be happy to discuss with him.

Levine evaded Rand’s questioning, but Stolberg ignored that in her huff:

The clash exposed the deep shift Washington is undergoing as Mr. Biden settles into office, undoing the policies of his predecessor, former President Donald J. Trump, who worked aggressively to undermine transgender rights….

Stolberg also focused on controversial Republican Rep. Marjorie Taylor Greene in a childish spat with Democratic Rep. Marie Newman, reframing the debate to make the transgender activist side “emotional” and sympathetic and the biological reality side “ugly” and abhorrent.

In emotional remarks in support of the bill on Thursday, Representative Marie Newman, Democrat of Illinois, said she was fighting to advance the legislation to ensure that people like her daughter, who is transgender, would no longer face discrimination. Representative Marjorie Taylor Greene, the first-term Republican from Georgia who is known for spreading false and bigoted conspiracy theories and has a history of online trolling, responded on Twitter, calling Ms. Newman’s daughter “your biological son” and saying that she did not “belong in my daughters’ bathrooms, locker rooms, and sports teams.”

The ugly attack on a fellow lawmaker’s child came after Ms. Newman posted video of herself putting up a transgender pride flag outside her office on Capitol Hill so Ms. Greene, her office neighbor, would have to “look at it every time she opens her door.” In response, Ms. Greene put up a poster of her own in the hallway outside that bore the phrase: “There are TWO genders: MALE & FEMALE.”

Since Mr. Biden nominated her, Dr. Levine has been subject to attacks on social media and from conservative news outlets that have asserted, without evidence, that she has advocated gender reassignment surgery for minors, which is generally not done in the United States.

A predictable conservative “seizure” was undertaken.

Her detractors have seized on a 2017 speech she gave describing hormone therapy as a standard of care for transgender youth, and also on a tweet she posted in January 2020 about a study showing that transgender youth with access to puberty blocking drugs are at decreased risk of suicide.

(Neither Levine or Stolberg or the CNN story Levine linked to bothered to link to the study itself, which can be found here: “Pubertal Suppression for Transgender Youth and Risk of Suicidal Ideation” )

Given that Levine admitted in the tweet that it was the first study, then it is by definition not the final word. Other findings suggest major potential problems with puberty blockers, besides the loss of fertility, including risk of suicide and self-harm, and stunted growth and loss of bone mass.

The Times always sides with transgender radicals, even adopting their bigoted smear of feminists -- in one case, Harry Potter author J.K. Rowling who dared insist that only women menstruate, as Trans-Exclusionary-Radical-Feminists, or TERFS.