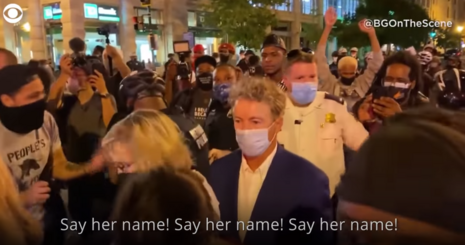 Coverage from the New York Times of the spate of left-wing rioting and attacks on conservatives remains stuck in denial mode, as unwittingly demonstrated in “Three Conspiracy Theories, Debunked,” by reporters Davey Alba and Ben Decker. While purporting to knock Trump, they actually reveal their paper’s own galling dismissal of left-wing thuggery against conservatives.

After hammering the president’s claim of a plane “loaded with thugs” headed to the Republican convention, Alba and Decker sniffed:

….But the claim is similar to a baseless allegation that appeared online as early as June, when a wave of cities and towns became alarmed by unsubstantiated rumors that the loose collective of anti-fascist activists known as antifa was being sent into their communities to disrupt the peace.

The idea resurfaced prominently again last week when Senator Rand Paul, a Republican from Kentucky, spoke about protesters who confronted him at the Republican convention.

“You just think, ‘Oh, these are some normal hoodlums from a big city.’ I promise you that at least some of the members and the people who attacked us were not from D.C.,” Mr. Paul said, according to Politico. “They flew here on a plane. They’ve all got fresh, new clothes.”

Mr. Paul did not offer any evidence to support this assertion.

Amazingly, that apparently stands as the sole acknowledgement in a Times news story of the vile and ignorant confrontation by left-wing activists of Sen. Paul and his wife Kelley after the last night of the Republican National Convention in D.C., according to a nytimes.com search. And naturally, it’s a disparaging reference.

Also in Wednesday’s paper, White House correspondent Peter Baker added to the list of Republican’s unfairly “seizing” on issues, while trying to downplay left-wing street riots, in “A Long History of Language That Incites and Demonizes.”

He has sought to conflate all protesters with the small minority of people who have looted stores, started fires and engaged in violence against police officers. He has blamed street unrest on Democratic mayors and governors and even former Vice President Joseph R. Biden Jr., his fall challenger.

Mr. Trump’s approach, intended to divert attention from the human and economic costs of the pandemic, is consistent with a career of combative politics that play to racial animosities, going back to his time in business.

He has at times exaggerated the extent of the violence and falsely attributed it across the board to the Antifa anti-fascist movement, one of his favorite targets.

As the right wing gets into the act in Portland, reporter Mike Baker, Julie Bosman, and Ricahrd Oppel Jr. sympathies were with the Black Lives Matter protesters in Wednesday’s “As Guns Get Drawn at Protest Sites, Demonstrators Fear a Volatile New Phase.” The lead sentence:

For months, as protests by Black Lives Matter and other groups have erupted across the country, the persistent confrontations have been largely between protesters and the police, with the conflict playing out in tear gas volleys and lobbed projectiles. But in recent days the protests in Portland and in Kenosha, Wis., have taken a more perilous turn -- right-wing activists have arrived, many carrying firearms, and they are bent on countering the racial justice protests with an opposing vision of America.

The left-wing has been assaulting the streets of Portland for three months, but now that right-wingers react, it’s suddenly “more perilous.”

The Times found a voice from the discredited Southern Poverty Law Center to attack the “far right.”

But Cassie Miller, a senior research analyst for the Southern Poverty Law Center, sees peril: “The far right is now anointing themselves the only force standing between order and chaos, a dangerous step toward normalizing the political violence that they already hold a monopoly on.”