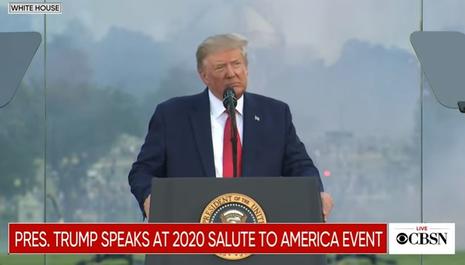 The front page of the New York Times’ local edition Sunday took another bite out of Trump’s Independence Day weekend speeches in “As Virus Rages and Poll Numbers Slip, ‘American Carnage’ Redux.” (That's a reference to Trump's inaugural address, which remains notorious among the liberal press)

The text box underlined an imaginary racist angle to Trump’s speeches: “Stoking racial fears to pit a white voting base against nationwide calls for social justice.”

The story, by White House reporters Annie Karni (who wrote of Trump’s “dark and divisive” Mount Rushmore speech story for yesterday’s front page) and Maggie Haberman, led off like a hostile liberal editorial and continued that way.

President Trump used the spotlight of the Fourth of July weekend to sow division during a national crisis, denying his failings in containing the worsening coronavirus pandemic while delivering a harsh diatribe against what he branded the “new far-left fascism.”

In a speech at the White House on Saturday evening and an address in front of Mount Rushmore on Friday night, Mr. Trump promoted a version of the “American carnage” vision for the country that he laid out during his inaugural address -- updated to include an ominous depiction of the recent protests over racial justice.

In doing so, he signaled even more clearly that he would exploit race and cultural flash points to stoke fear among his base of white supporters in an effort to win re-election. As he has done in the past, he resorted on Friday to exaggerated, apocalyptic language in broadly tarring the nationwide protests against entrenched racism and police brutality, saying that “angry mobs” sought to “unleash a wave of violent crime in our cities” and that those seeking to deface monuments want to “end America.”

Mr. Trump followed up with his remarks on Saturday from the South Lawn of the White House, which sounded more like a campaign rally, and repeated the themes from the previous evening.

“We will never allow an angry mob to tear down our statues, erase our history, indoctrinate our children or trample on our freedoms,” Mr. Trump said, claiming that protesters -- who have won broad public support, including from corporate America -- were “not interested in justice or healing.”

Karni and Haberman hammered home the racial message that Trump “is leaning on culture wars instead to buoy his base of white supporters,” then twisted the optimism of Trump’s actual speeches (which didn’t have a hint of the racism Times reporters were so eager to find) to somehow make him a Confederate sympathizer.

Though Mr. Trump avoided references in both speeches to the symbols of the Confederacy that have been a target of many protests, referring instead to monuments of America’s “founders,” he has in the past defended statues honoring Confederate soldiers as “beautiful.”

The Times also keeps insisting in the face of all evidence that Joe Biden is a centrist, not a liberal Democrat, while ardently defending the former VP against Trump.

In Mr. Biden, Mr. Trump also faces a centrist opponent who is not easily branded as a radical liberal, but rather one who is seen as a palatable alternative by some older voters and Republicans in a way that Hillary Clinton was not....

That hasn’t stopped the Trump campaign from claiming that in the black-and-white world it wants to present to voters in November, Mr. Biden is on the side of violent looters....