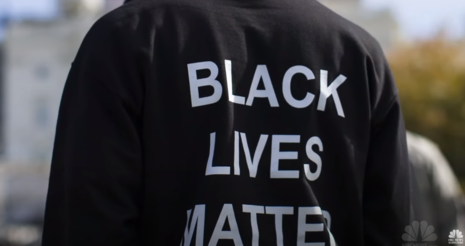 Black Lives Matter (as opposed to the truistic slogan “Black Lives Matter”) is a political organization that has controversial positions, including defunding the police, reparations, and “a reconstruction of the economy to ensure our communities have collective ownership” that are up for debate in a free society.

Roose first made a name for himself at the paper with an elaborate, panicky Sunday front-page expose, “The Making of a YouTube Radical – How the Site’s Algorithms Played Into the Hands of the Far Right.” He treats anything critical of the radical left with fear and contempt.

Several weeks ago, as protests erupted across the nation in response to the police killing of George Floyd, Mark Zuckerberg wrote a long and heartfelt post on his Facebook page, denouncing racial bias and proclaiming that “black lives matter.”...

Well, sort of. The problem is that, while these shows of support were well intentioned, they didn’t address the way that these companies’ own products -- Facebook, Twitter and YouTube -- have been successfully weaponized by racists and partisan provocateurs, and are being used to undermine Black Lives Matter and other social justice movements....

It’s hard to remember sometimes, but social media once functioned as a tool for the oppressed and marginalized. In Tahrir Square in Cairo, Ferguson, Mo., and Baltimore, activists used Twitter and Facebook to organize demonstrations and get their messages out.

But in recent years, a right-wing reactionary movement has turned the tide. Now, some of the loudest and most established voices on these platforms belong to conservative commentators and paid provocateurs whose aim is mocking and subverting social justice movements, rather than supporting them.

So the only non-racist use of social media is supporting whatever Roose decides is a “social justice movement”?

On Facebook, for example, the most popular post on the day of Mr. Zuckerberg’s Black Lives Matter pronouncement was an 18-minute video posted by the right-wing activist Candace Owens. In the video, Ms. Owens, who is black, railed against the protests, calling the idea of racially biased policing a “fake narrative” and deriding Mr. Floyd as a “horrible human being.”...

Ms. Owens is a serial offender, known for spreading misinformation and stirring up partisan rancor. (Her Twitter account was suspended this year after she encouraged her followers to violate stay-at-home orders....)

Were there any Twitter suspensions over the George Floyd protest rallies, which clearly violated stay-at-home orders?

Twitter has been a supporter of Black Lives Matter for years -- remember Mr. Dorsey’s trip to Ferguson? -- but it, too, has a problem with racists and bigots using its platform to stir up unrest....