New York Times’s Kevin Roose profiled former Vox journalist and gay/Marxist activist on the front of the paper’s Business section Thursday in “A Thorn in YouTube’s Side Digs In Even Deeper."

Maza, whose Twitter bio refers to Tucker Carlson as a white supremacist, targeted conservative Steven Crowder in 2019. After Crowder mocked him as a “lispy queer,” YouTube was pressured into demonetizing Crowder’s YouTube videos. Yet in Roose’s telling, leftists have no influence at a YouTube dominated by dangerous “reactionary politics." 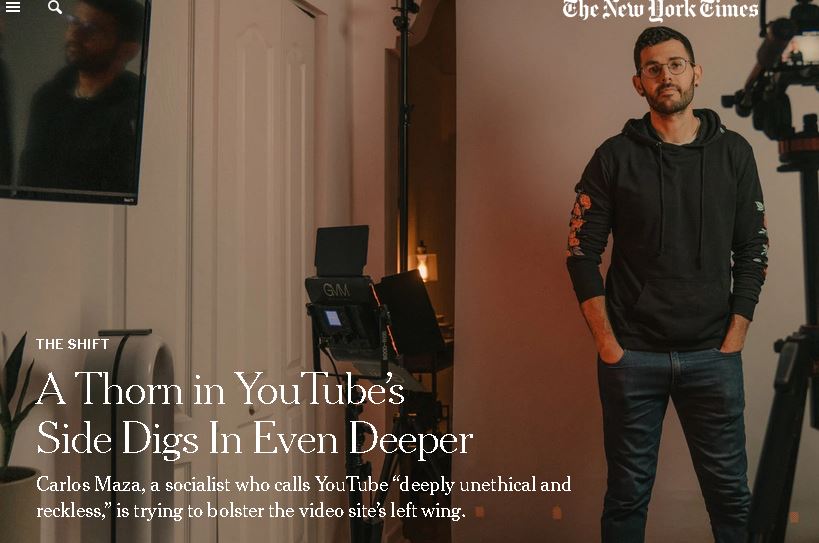 Roose was unswervingly celebratory of Maza and contemptuous of conservatives.

Carlos Maza believes that YouTube is a destructive, unethical, reckless company that amplifies bigots and profits off fascism.

Mr. Maza, 31, announced several weeks ago that he was leaving Vox, where he had worked as a video journalist since 2017, to become a full-time YouTube creator.

The move shocked some of Mr. Maza’s fans, who have watched him become one of YouTube’s most vocal critics for failing to stop a right-wing pile-on against him last year. The controversy that followed that campaign, which was led by a prominent conservative YouTuber, turned Mr. Maza into a YouTube mini-celebrity and made him a sworn enemy of the site’s free-speech absolutists. He received death threats -- and was temporarily forced to move out of his apartment.

Rather than swearing off YouTube, Mr. Maza, who is a New York-based socialist, decided to seize the means of his own video production.

Maza himself, a fan of de-platforming, is no slouch at internet bullying. A tweet from May 2019, when leftists were assaulting conservatives with milkshakes: "Milkshake them all. Humiliate them at every turn. Make them dread public organizing."

YouTube can be harsh terrain for a professional leftist. The site is nominally open to all views, but in practice is dominated by a strain of reactionary politics that is marked by extreme skepticism of mainstream media, disdain for left-wing “social justice warriors” and a tunnel-vision fixation on political correctness.

In recent years, some progressive YouTubers have tried to counter this trend by making punchy, opinionated videos aimed at left-wing viewers... leftists like Natalie Wynn... and Oliver Thorn...

(Roose has actually shilled for them before).

But these creators are still much less powerful than their reactionary counterparts....

It’s a funny, knowing skit, and it shows how familiar Mr. Maza is with the customs and culture of YouTube. He doesn’t wear a suit or plaster himself with stage makeup. He doesn’t take himself too seriously, or adopt a Walter Cronkite-like pose of objectivity.

Maza was pleased on Twitter: “Thanks to @kevinroose for a thoughtful piece about the need for progressives to make more cool shit on YouTube.”

Roose is notorious for his jittery 2019 front-page smear “The Making of a YouTube Radical – How the Site’s Algorithms Played Into the Hands of the Far Right.”