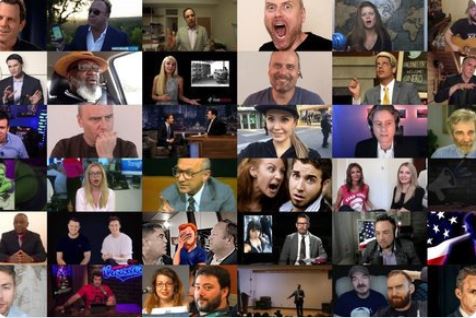 Kevin Roose, a technology writer for the New York Times, made a front-page splash on Sunday with “The Making of a YouTube Radical – How the Site’s Algorithms Played Into the Hands of the Far Right.” A caption underneath a photo of the story’s subject: “Caleb Cain likens the far right on YouTube to a “decentralized cult.”

The interactive version is graphically rich, dominated by an enormous collage of some of the ostensibly harmful YouTube clips Cain watched over several years, and the 4,000-word plus print version take up two full inside pages.

Caleb Cain was a college dropout looking for direction. He turned to YouTube....Soon, he was pulled into a far-right universe, watching thousands of videos filled with conspiracy theories, misogyny and racism.

Caleb Cain pulled a Glock pistol from his waistband, took out the magazine and casually tossed both onto the kitchen counter.

Cain claimed he was getting death threats “from right-wing trolls in response to a video he had posted on YouTube a few days earlier. In the video, he told the story of how, as a liberal college dropout struggling to find his place in the world, he had gotten sucked into a vortex of far-right politics on YouTube.”

Roose, who works for the anti-gun Times, didn’t blink about the impulsive gun purchase.

Mr. Cain, 26, recently swore off the alt-right nearly five years after discovering it, and has become a vocal critic of the movement. He is scarred by his experience of being radicalized by what he calls a “decentralized cult” of far-right YouTube personalities, who convinced him that Western civilization was under threat from Muslim immigrants and cultural Marxists, that innate I.Q. differences explained racial disparities, and that feminism was a dangerous ideology.

Over years of reporting on internet culture, I’ve heard countless versions of Mr. Cain’s story: an aimless young man -- usually white, frequently interested in video games -- visits YouTube looking for direction or distraction and is seduced by a community of far-right creators.

Some young men discover far-right videos by accident, while others seek them out. Some travel all the way to neo-Nazism, while others stop at milder forms of bigotry.

For Roose, right-leaning YouTube is a continuum of bigotry. He leaves the status of YouTube personalities on that continuum distressingly (purposely?) vague, which made it convenient to taint them all with the smear of alt-right bigotry. He loosely threw in internet comedian and provocateur Steven Crowder (who is separately being demonetized by YouTube after pressure from gay rights groups) and his “shock-jock antics.”

In the end, Cain was never much of an alt-right racist. He started dating a Christian girl and started arguing with liberal friends. That’s apparently enough to make you seem a potentially dangerous alt-right guy. Thank goodness some Marxist drag queens eventually saved him.

Roose even broke down Cain’s viewing habits statistically, leaving one disturbed not so much by what as how much he was watching (12000 videos since 2015).

These interviews and data points form a picture of a disillusioned young man, an internet-savvy group of right-wing reactionaries and a powerful algorithm that learns to connect the two. It suggests that YouTube may have played a role in steering Mr. Cain, and other young men like him, toward the far-right fringes.

It also suggests that, in time, YouTube is capable of steering them in very different directions.

Away from the far-right fringe and toward the far-left fringe! Hooray? One eagerly awaits Roose’s expose of left-wing Antifa, anti-Semitism and the justification of physical attacks on “TERFS” -- feminist opponents of radical transgenderism.

This paragraph demonstrates how Roose’s impressionistic style lumps in everyone right of center on YouTube under a broad “fascist” rubric:

Over time, he watched dozens of clips by Steven Crowder, a conservative comedian, and Paul Joseph Watson, a prominent right-wing conspiracy theorist who was barred by Facebook this year. He became entranced by Lauren Southern, a far-right Canadian activist, whom he started referring to as his “fashy bae,” or fascist crush.

Roose’s idea of a potentially dangerous “transformation” seems to be Cain evolving into a mainstream Republican supporter who enjoys watching Democrats lose, a wholly mainstream view:

He spent much of the night watching clips of Ms. Clinton’s supporters crying after the election was called in Mr. Trump’s favor. His YouTube viewing history shows that at 1:41 a.m., just before bed, he turned on a live stream hosted by Mr. Crowder, with the title “TRUMP WINS!”

These people didn’t couch their racist and anti-Semitic views in sarcastic memes, and they didn’t speak in dog whistles....

So who did speak in racist “dog whistles”? Roose never clarifies who is a fascist/racist and who is just a conservative. And Cain was never that “far-right,” if this is the worst Roose found:

Mr. Cain never bought into the far right’s most extreme views, like Holocaust denial or the need for a white ethnostate, he said. Still, far-right ideology bled into his daily life. He began referring to himself as a “tradcon” -- a traditional conservative, committed to old-fashioned gender norms. He dated an evangelical Christian woman, and he fought with his liberal friends.

In 2018, nearly four years after Mr. Cain had begun watching right-wing YouTube videos, a new kind of video began appearing in his recommendations.

These videos were made by left-wing creators, but they mimicked the aesthetics of right-wing YouTube, down to the combative titles and the mocking use of words like “triggered” and “snowflake.”

Mr. Cain also found videos by Natalie Wynn, a former academic philosopher who goes by the name ContraPoints. Ms. Wynn wore elaborate costumes and did drag-style performances in which she explained why Western culture wasn’t under attack from immigrants, or why race was a social construct.

When Mr. Cain first saw these videos, he dismissed them as left-wing propaganda. But he watched more, and he started to wonder if people like Ms. Wynn had a point. Her videos persuasively used research and citations to rebut the right-wing talking points he had absorbed.

Ms. Wynn and Mr. Bonnell are part of a new group of YouTubers who are trying to build a counterweight to YouTube’s far-right flank....It also includes people like Oliver Thorn, a British philosopher who hosts the channel PhilosophyTube, where he posts videos about topics like transphobia, racism and Marxist economics.

No doubt there was some offensive stuff somewhere in Cain’s voluminous clip diet. But the real-world threat of whatever Cain was watching was left vague, and seemed to consist of people expressing ideas about social justice and feminism that offended Roose and his Times editors.