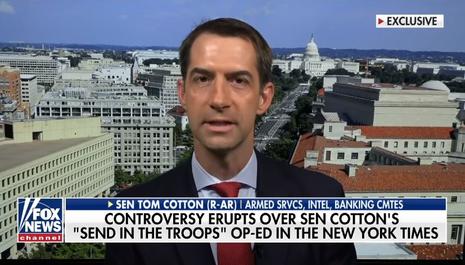 The New York Times right-leaning columnist Ross Douthat used his perch for a long (online only) piece, more an essay than a column, about the paper’s recent ideological meltdown over an op-ed from a Republican senator: “The Tom Cotton Op-Ed and the Cultural Revolution -- How liberalism, and the liberal media, are changing before our eyes.”

Sen. Cotton’s New York Times op-ed called for military troops to be deployed to quell looting and rioting that accompanied the protests over George Floyd's killing. It caused a “woke” staff revolt and resulted in the resignation of the paper’s editorial page editor James Bennet.

Douthat’s essay is a piece of a process, encouraged by newly installed editorial page editor Kathleen Kingsley, allowing the paper’s opinion writers to comment on the Cotton incident. Douthat’s entry is sedate, scholarly, and perhaps a touch too polite, though he surely operates under unspoken constrictions that irresponsible liberal columnists like Michelle Goldberg can ignore. Yet he gets his point across and kills the Times with kindness.

Douthat opened with a birds-eye view of today’s shifting ideology before focusing on his own paper. He pointed out how “#MeToo activism....has advanced a longstanding and admirable liberal goal -- the right of the individual to be free from rape, assault and unwanted sexual aggression,” while pointing out the “new disciplinary structures, primarily on college campuses...point us toward...a bureaucratic supervision of intimate life, often built on the presumption of male guilt rather than due process.”

He did the same on the rampant excesses of the debate over transgender rights, which have advanced roughshod over “other constitutional rights long considered essential to liberalism” like freedom of speech and religion. Then he turned to the Black Lives Matter movement:

....its capacious definitions of racism imply, in the end, not reform but re-education, not interracial dialogue but strict white deference, not a liberal society groping toward equality but a corrupt society being re-engineered.

Then it was the media’s turn. After noting the press's laudable goals of diversity and equal opportunity, he faulted the “growing newsroom assumption that greater diversity should actually lead to a more singular perspective on the news, a journalism of 'truth' rather than 'objectivity.'”

At last Douthat drilled down -- politely -- to his own newspaper’s leftist bias, on embarrassing display during the Cotton imbroglio.

....as our news pages have become more ideological, oriented toward the perceived truths of the successor ideology...the Op-Ed page has gone from being to the left of the news pages to being, strangely, somewhat to their right....There were many reasonable grounds to criticize Cotton’s Op-Ed....neither of the two internal Times arguments for why we were wrong to publish Cotton are persuasive -- not the official ruling that the piece did not meet our standards of accuracy or rigor, nor the social media arguments from colleagues suggesting that Cotton’s proposal put the lives of our black staffers at risk.

Douthat damned his newspaper with faint praise at the end, cleverly pitting “woke” staffers who “unjustly cost my friend and former boss his job,” versus the more traditional old-school liberals who still give lip service to objectivity and debate.