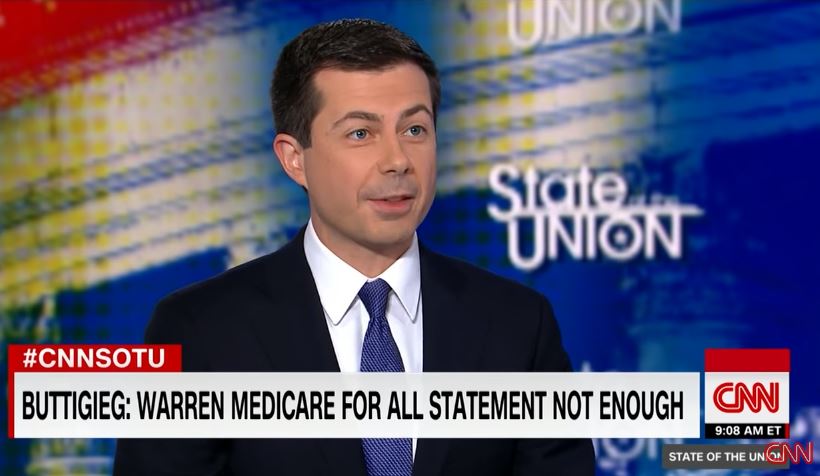 As the presidential race deepens, the New York Times is trying to convince voters that two safely liberal Democratic candidates are in fact moderates or even “centrists.” They went all out on Thursday’s front page, with reporter Reid Epstein’s “Buttigieg Slips Into the Lane To Biden’s Left.” The jump-page headline: “Buttigieg Slips Into a Centrist Lane Between the Progressives and Biden.” The online headline underlined: “As a Centrist Path Opens, Pete Buttigieg Moves Toward It.”

“Moderate” is wrong enough, but calling Buttigieg a “centrist” defies all objective metrics. As Epstein himself notes, the South Bend Indiana mayor has praised the Green New Deal and called for decriminalizing illegal border crossings. But by October, he “had moved toward the center on all three issues.”

Buttigieg is “offering himself as the viable moderate alternative to Ms. Warren and Senator Bernie Sanders of Vermont....His supporters said they’re drawn to him precisely because of his centrist nature....His shift to the center has come as political strategists see a potential new opening for a centrist, after Mr. Biden appeared wobbly in debates and recorded about one-third the cash on hand as did Mr. Buttigieg.

With all the hemming and hawing over Buttigieg’s position on the ideological continuum, one word was almost wholly absent from Epstein's piece: Liberal. The Times favors the euphemism “progressive.” Yet the Times has a history of throwing around the word “conservative,” treating it as a warning. And sometimes the paper's use of the "conservative" label defies reality. Reporter Mihir Zaveri’s October 22 story on Sen. Mitt Romney’s secret Twitter account called Jennifer Rubin “a conservative blogger at The Washington Post.” (Rubin is assuredly not a conservative anymore.)

A front-page story October 22 by Trip Gabriel labeled another candidate, Minnesota Sen. Amy Klobuchar, as “moderate” even though he quoted her calling herself progressive in the same story, “After Debate, Iowans Look Again at Klobuchar – High Stakes as Senator Courts Moderates.” (Buttigieg also earned a “moderate” description.)

Alexander Burns and Jonathan Martin did the same “moderate” labeling on October 16.

An October 16 story by the same team after the Democratic debate in Ohio:

Senator Elizabeth Warren of Massachusetts faced a sustained barrage of criticism from her Democratic rivals at a presidential debate in Ohio on Tuesday, tangling with a group of underdog moderates who assailed her liberal economic proposals....

Another take on the debate described “Amy Klobuchar, a moderate Senate peer...”

Another debate view: “Who Won the Debate? Experts Weigh In -- Elizabeth Warren fielded all the attacks that being a front-runner brings, and Pete Buttigieg and Amy Klobuchar made their cases as moderate alternatives.”

Again, that is lousy labeling. Buttigieg has no federal voting record to rate (his support for the Green New Deal, abortion on demand, and packing the Supreme Court are proof enough of his liberalism). But Klobuchar has earned a quite liberal 4.71 (out of 100) rating from the American Conservative Union during her 11 years in Congress.