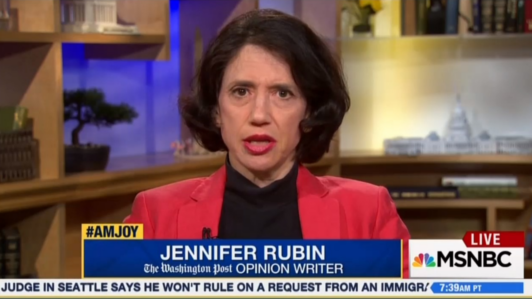 During her nine-year tenure as a blogger for the Washington Post, Jennifer Rubin has written columns that have been described by the newspaper as coming “from a conservative perspective.”

More than three dozen conservative leaders disagreed with that assessment on Wednesday, when they sent a letter to the Post’s editorial board stating that Rubin has “repeatedly rejected conservative ideas and principles” and is an example of why the American people are unable to trust the media.

According to an article by Mollie Hemingway, senior editor with The Federalist online magazine, the missive read: “In truth, it is nearly impossible to discern any conservatism in Rubin’s contemporary writing.”

Hemingway then cited Rubin’s rejection of her previous positions on climate change, gun control, Middle East foreign policy, tax cuts, immigration and abortion before stating that the group found the notion that Rubin is conservative “laughable.”

“More recently,” she noted, the Post columnist has mocked virginity as “juvenile, emotionally stunted” behavior, argued in favor of impeaching Judge Brett Kavanaugh, mocked those who defend due process and the rule of law, campaigned for Democrats and against Republicans, and generally engaged in obsessive behavior against conservatives on social media.

We, of course, respect the right of the Washington Post to employ whatever writers it pleases -- even Jennifer Rubin.

However, we ask for the sake of intellectual honesty that the Post cease to identify her as in any way “conservative.”

They also asked that the newspaper, which employs no columnists that represent the views of the vast majority of Republicans, consider dealing with that major problem more than two years after Donald Trump’s election as president shocked the media class.

“[W]e also respectfully request that you consider hiring a voice who can eloquently and effectively defend the positions held by our president, his party and the millions of voters who elected him,” the letter added before noting: “We would be happy to provide recommendations.”

Among the three dozen signers are Francis P. Cannon and Terry Schilling of the American Principles Project, Susan B. Anthony List President Marjorie Dannenfelser, Jim DeMint from the Conservative Partnership Institute, Brent Bozell of the Media Research Center (the publisher of NewsBusters) and Foley and Lardner partner Cleta Mitchell.

“They are only the most recent group to express concern about Rubin being identified by the Post as a conservative,” Hemingway also stated before noting that NationalReview.com Editor Charles Cooke wrote “the definitive analysis of Rubin’s changing of positions simply because of her opposition to Trump.”

In Cooke’s article, he noted: “If Trump likes something, Rubin doesn’t. If he does something, she opposes it.”

“If his agenda flits into alignment with hers -- as anyone’s is wont to do from time to time -- she either ignores it or finds a way to downplay it,” the editor declared.

When President Obama agreed to the Paris Climate Accord, Rubin left her readers under no illusions as to the scale of her disapproval.

The deal, she proposed, was “ephemeral,” “a piece of paper,” “a group wish,” a “nonsense” that would achieve “nothing.”

“That the U.S. had been made a party to a covenant so ‘devoid of substance,’” she added, “illustrated the ‘fantasy world’ in which the Obama administration lived.”

“At least it did until President Trump took America out of it," Cooke declared.

“To abandon the ‘ephemeral’ ‘piece of paper,’” Rubin submitted, “would ‘materially damage our credibility and our persuasiveness’ and represent conduct unbecoming of ‘the leader of the free world.'”

“The Post has thus far declined repeated calls to rectify its deficit of actual conservative writers or deal with its false labeling of Rubin,” Hemingway concluded.

It’s interesting that the newspaper’s motto is “Democracy Dies in Darkness.” Apparently, so does the truth about conservatives.