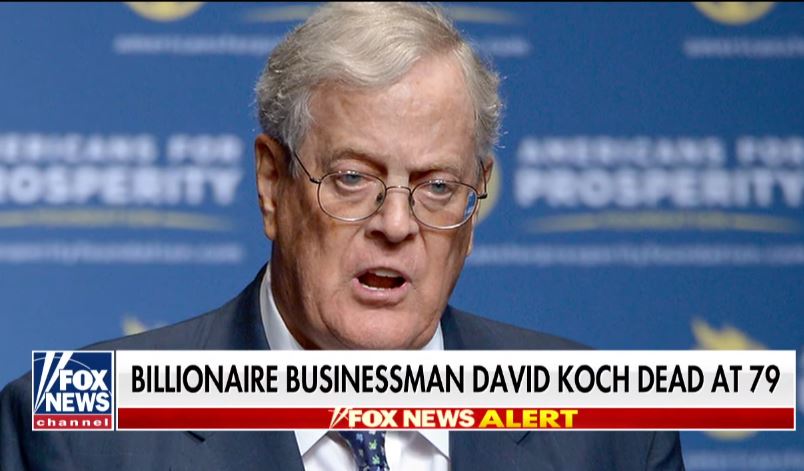 David Koch, the foremost of the businessmen, philanthropists, and libertarian activists known colloquially as the “Koch Brothers,” has died at 79. The New York Times marked his passing Friday by posting an obituary by Robert McFadden: “David Koch, Industrialist Who Fueled Right-Wing Movement, Dies at 79 -- A man-about-town philanthropist, he and his brother Charles ran a business colossus while furthering a libertarian agenda that reshaped American politics.”

The paper has long had a virulent hostility to the Kochs libertarian activism (often lazily termed “conservative” by the paper, as an additional insult). The paper’s front page had previously framed “Kochs Finance High-Tech War Against Transit – Targeting Voter Data to Kill Buses and Rail," while another front-page story by the same reporter, Hiroko Tabuchi, slammed the Kochs as racist for the crime of...reaching out to black citizens on energy issues.

McFadden’s obituary for Koch is not as awful, but is still marred by bad faith and bad labeling.He has a history of hostile obits for conservatives, while showing reverence for liberal figures.

David H. Koch, who joined his brother, Charles G. Koch, in business and political ventures that grew into the nation’s second-largest private company and a powerful right-wing libertarian movement that helped reshape American politics, has died. He was 79.

Charles Koch announced the death in a statement, which gave no cause but noted that David Koch had suffered from prostate cancer in the past.

Hitching his star to the soaring ambitions of his older brother, David Koch (pronounced coke) became one of the world’s richest people, with assets of $42.2 billion in 2019 and a 42 percent stake in the global family enterprise, Koch Industries. He also became a nationally known philanthropist and the early public face of the Koch political ascendancy, as the Libertarian Party’s candidate for vice president in 1980.

Three decades after David Koch’s public steps into politics, analysts say, the Koch brothers’ money-fueled brand of libertarianism helped give rise to the Tea Party movement, strengthened the far-right wing of a resurgent Republican Party and played a significant role in the election of Donald J. Trump as president in 2016.

Never mind that the Kochs didn’t endorse Trump and in fact battled him during the 2018 Congressional elections.

McFadden sketched out David Koch’s love for the ballet and dinosaurs, which led to his name appearing at Lincoln Center and the American Museum of Natural History, among his vast charitable giving. But McFadden insisted on looking at the “Koch Brothers” successful political activism with suspicion, putting them on the rhetorical defensive with word choice (“insisted”), scare quotes, and hostile “far right” labeling, while making political activism sound sinister and secret.

He also had bad experiences and good luck. He survived a 1991 plane crash that killed 34 people at Los Angeles International Airport. He broke down in tears on a witness stand in Kansas during a civil trial that nearly tore his family apart over money. And for years, he and Charles faced, and denied, accusations of having exploited libertarian principles for self-serving purposes.

They insisted that they adhered to a traditional belief in the liberty of the individual, and in free trade, free markets and freedom from what they called government “intrusions,” including taxes, military drafts, compulsory education, business regulations, welfare programs and laws that criminalized homosexuality, prostitution and drug use.

Since the 1970s, the Kochs have spent at least $100 million -- some estimates put it at much more -- to transform a fringe movement into a formidable political force aimed at moving America to the far right by influencing the outcome of elections, undoing limits on campaign contributions and promoting conservative candidacies, think tanks and policies.

McFadden kept painting the picture of a raging “Kochtopus”:

Critics accused the Kochs of buying influence and using their political machine to manipulate elections and government policies under a guise of patriotism and freedom, cloaking what the critics called a hidden agenda to cut taxes and federal regulations governing business, the environment and other interests, primarily to benefit the Koch family and its enterprises.

He cited a favorite Times source for left-wing journalistic conspiratorialism:

Jane Mayer, the New Yorker writer and a critic of the Koch brothers, said in her book “Dark Money: The Hidden History of the Billionaires Behind the Rise of the Radical Right” (2016), that the libertarian policies they embraced benefited Koch chemical and fossil fuel businesses, which were among the nation’s worst polluters, and paid millions in fines and court judgments for hazardous-waste violations.

Koch money also funded initiatives to undercut climate science and to counter efforts to address climate change. As Ms. Mayer put it in her book, “The Kochs vehemently opposed the government taking any action on climate change that would hurt their fossil fuel profits.”

He also delved into family squabbles and aired some dirt from family lawsuits.

McFadden's disparate tone upon the death of conservative and left-wing figures is striking. Check his 2018 obituary for American beer pioneer William Coors: “William Coors, Ultraconservative Leader Of Brewery Based in Colorado, Dies at 102.” The text box: “A chairman’s speeches were often labeled racist, sexist and homophobic.”

His treatment of the 2018 death of Thomas Monson, president of the Mormon church, garnered impassioned complaints from readers, so much that the paper’s “Reader Center” felt obliged to address them.

Those hostile pieces make a wild contrast with his reverence for hard-left congressman Ron Dellums, remembered for “a left-wing agenda that put civil rights and programs for people ahead of weapons systems and warfare.”