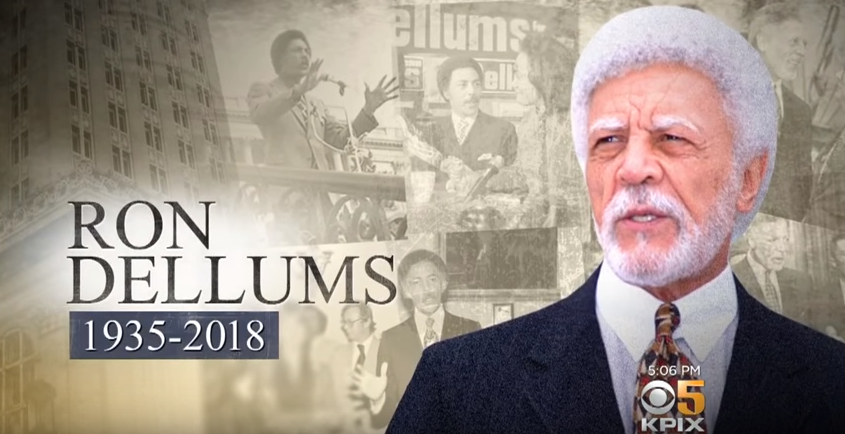 It’s a standard the paper doesn’t apply to conservative figures.

Ron Dellums, the son of a longshoreman who became one of America’s best-known black congressmen, a California Democrat with a left-wing agenda that put civil rights and programs for people ahead of weapons systems and warfare, died early Monday at his home in Washington. He was 82.

A former social worker representing Oakland and Berkeley, perhaps the nation’s most liberal congressional district, Mr. Dellums went to Washington in 1971 as a fiercely liberal -- some said radical -- firebrand protesting the Vietnam War.

“Some” might say that, but not the Times, which did its best to mainstream Dellum’s left-wing record.

Dellums got his start demanding “a House investigation into American war crimes in Vietnam” but became “a mellower graybeard spearheading the Congressional Black Caucus....” After that:

Mr. Dellums introduced hundreds of bills and resolutions that went nowhere, and was rarely on the winning side of fights. But he was an outspoken critic of presidents, Republican and Democratic, and for many Americans beyond his tiny Congressional district, he championed a progressive mantra: Stop war. Cut military spending. Help people. Address the nation’s social problems.

He won a dozen re-election campaigns and the sometimes grudging respect of colleagues on both sides of the aisle. His voting record also won virtually straight A’s from labor, consumer, women’s and environmental groups. Human rights organizations hailed his fights to restrict aid to African nations, like Zaire, Burundi, Liberia and Sudan, whose regimes were openly repressive.

Right-wing critics repeatedly labeled him a Communist, citing his 1970 talk to a world peace conference in Stockholm and his meeting with President Fidel Castro of Cuba in Havana in 1977.

The Times could have explored that side of Dellum’s legacy more. The Media Research Center has previously documented Dellums' support for dictators Fidel Castro and Maurice Bishop, the leftist revolutionary who (temporarily) overthrew a U.S.-backed regime in Grenada in 1979.

“If being an advocate of peace, justice and humanity toward all human beings is radical, then I’m glad to be called radical,” he told The Washington Post. “And if it is radical to oppose the use of 70 percent of federal monies for destruction and war, then I am a radical.”

The share of the total federal budget devoted to defense spending currently hovers around 20%. Even assuming more during the Reagan build-up, the percentage can only possibly approach 70% by not including non-discretionary, “entitlement” spending like Social Security and Medicare. Given the paper hectoring on President Trump’s numbers on NATO defense spending, one would think they would be careful reprinting misleading data, even in an obit.

Over time, congressional colleagues came to respect Mr. Dellums’s legislative and military expertise. In 1993, the House Democratic Caucus voted 198-10 to name him chairman of the Armed Services Committee, with oversight for defense appropriations and global military operations.

His decision to retire in 1998, halfway through his term, made headlines, and brought many encomiums.

McFadden let Dellums eulogize himself more, and concluded with gush from a rival paper:

“The story of Ronald Dellums’s 27 years in Congress is not just about a wild-eyed radical, a self-described ‘commie pinko Afro-topped bell-bottomed dude from Berkeley’ who earned the love of friends and the respect of enemies,” The Washington Post wrote in 1998 on Mr. Dellums’s retirement. “It is about a man who made strategic and deliberate decisions about how and when and for how long to promote his causes, to ignore insult and outlast exclusion, to be a gentleman rather than a firebrand.”

This encomium to Dellums is far from how the paper treats conservative politicians, or even non-political businessmen who are on the “wrong” side of gay marriage.